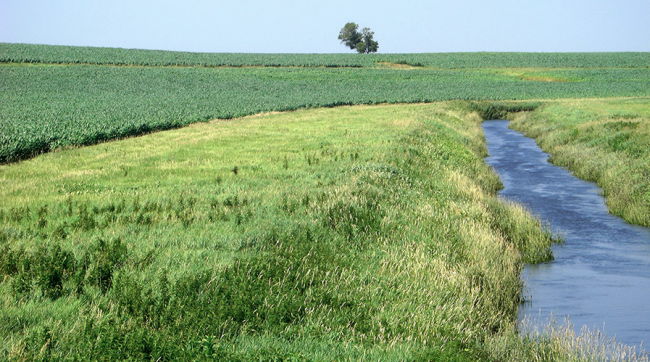 A handful of rollbacks to Gov. Mark Dayton’s landmark Buffer Rule continue to capture legislative attention at the Minnesota Capitol this session.

The passage of Gov. Mark Dayton's buffer initiative was one of the few bright spots in an otherwise troublesome 2015 legislative session. The law establishes green strips of perennial vegetation along rivers, streams and ditches wherever they are appropriate to help filter out phosphorus, nitrogen and sediment pollution before our state’s waters become polluted. The rule is an important victory for Minnesota’s waters.

While FMR remains unhappy with the state’s efforts to prepare maps of lands requiring buffers, and some modest rollbacks to the bill were successful in 2016, the rule remains a hard-won environmental victory for all Minnesotans. Unfortunately, a series of bills ranging from delayed implementation to outright repeal persist.

A brief review of rollback bills to repeal, delay, greatly reduce enforcement of otherwise undermine or eliminate this landmark law for water quality.

Exempting Waters From The Rule
HF 776: (Backer - R; Miller, Hamilton, Baker, Kiel)
Status: introduced and referred to Environment and Natural Resources Policy and Finance
Description: This bill modifies the statutory definition of a public waters requiring a buffer to exclude most smaller streams and all public water wetlands. Specifically, this bill would change the definition of public waters in 103G.005, subdivision 15, paragraph (a) to specifically exclude clauses (9) and (11) as it applies to the buffer rule:
- (9) natural and altered watercourses with a total drainage area greater than two square miles; and
- (11) public waters wetlands.

The DNR has already (wrongly, in our view) exempted public water wetlands from buffer maps, and is inconsistent in applying buffers to smaller headwaters streams where buffer protects are most important for water quality. This bill would bar any future fixes to already flawed buffer maps, leaving potentially tens of thousands of acres of public water wetlands and streams without buffer protections.

Local Buffer Approval
HF 684: (Backer; Miller; Anderson, P.; Swedzinski; Heintzeman; Schomacker; Dean, M.)
Status: introduced and referred to Environment and Natural Resources Policy and Finance
Description: This bill requires that local soil and water conservation districts (SWCDs) approval of buffer protection maps before the rule goes into effect. This bill is unnecessary, as these entities have already reviewed the buffer maps and only a handful of disagreements remains across thousands of miles of stream, river and ditches on these maps. Furthermore, this bill would give a few intransigent local governments the opportunity essential re-write buffer maps to their liking or simply to stymie any future implementation of a critical water quality rule. Delaying the buffer mapping process or empowering LGUs to re-write buffer maps to their liking is unacceptable and unnecessary

Each of these bills poses dire consequences to the healthy implementation of the buffer rule. FMR and our allies are particularly concerned about the potential for several of these provisions to be combined with a final environmental budget bill at the 11th hour of the legislature, forcing Gov. Mark Dayton to either sign the bill or risk a veto that would result in a partial government shutdown.

Bad environmental bills like this one are why FMR is a proud sponsor of Water Action Day.

Water Action Day (April 19, 2017) is Minnesota’s day of public action and advocacy to let lawmakers know we care about our water. This all-day event at the Minnesota State Capitol will include a rally, issue trainings and meetings with your legislators. Come for all or part of the day and let your voice be heard! Learn more and register today.