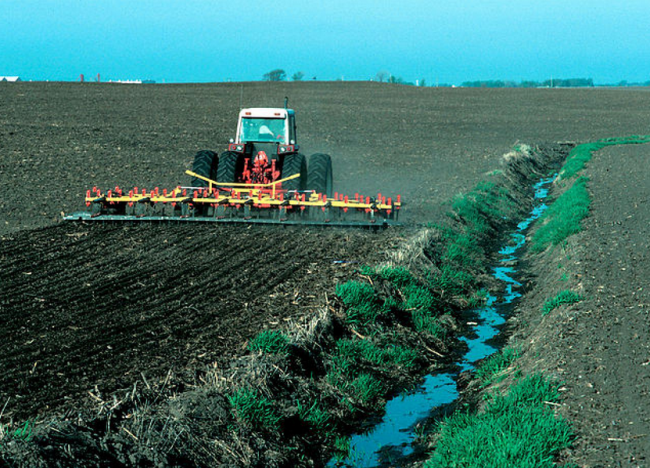 An unexpected amendment to the state's buffer law undermines Gov. Mark Dayton’s landmark buffer initiative by removing 50-foot buffers from as many as 48,000 miles of Minnesota streams.

The passage of Gov. Mark Dayton's buffer initiative was a bright spot of the 2015 legislative session. It establishes green strips of perennial vegetation along rivers, streams and ditches to help filter out pollutants like phosphorus, sediment and nitrogen. An important victory for Minnesota’s waters, the buffer law has become the subject of a number of rollbacks this legislative session.

The original bill: A fine idea

FMR supported the original bill, HF 1466 (Torkelson, R – 16B), which sought aid for counties and watersheds accepting jurisdiction to enforce the buffer law. However, an unexpected amendment transformed the bill into a rollback of the existing buffer law.

Though we've raised concerns about its implementation, FMR has strongly supported Governor Dayton’s buffer law. In Minnesota, 50-foot buffers on all public waters have been required since 1989, but the governor’s buffer law greatly enhances our enforcement efforts.

The amendment (1466DE2) fundamentally transforms the law in several concerning ways:
• Changing which waters are eligible, reducing required buffer protections for an estimated 48,000 miles of streams,
• Delaying the deadline for remaining buffers by a year,
• Removing local governments enforcement authority, and
• Restricting enforcement to only those buffers established and maintained 100 percent through public funding.

FMR is deeply concerned about these provisions, and we are hopeful we can work with legislators from both parties to address our concerns.

To learn more, read on. Or, if you're ready to skip to the take-action part, sign up to be a River Guardian and we'll be in touch as soon as there's an opportunity to weigh in on this and other important river-related issues.

APO authority is essentially the ability to write a ticket for failing to have a required buffer in place. Without it, counties and watersheds would instead be forced to take formal legal action against landowners to enforce the law — a costly, time-consuming and unnecessary approach.

In fact, the lack of APO authority for local buffer enforcement was one of the driving factors behind the passage of the 2015 buffer law. Lacking APO authority, some counties who wanted to enforce the existing 50-foot buffer found themselves hamstrung by the lengthy and costly legal process. APO authority allows efficient enforcement of an important clean water protection. FMR does not support barring local governments from the chance to effectively enforce the law, should they chose to accept jurisdiction for enforcing the law.

This provision essentially removes buffer protections for thousands of miles of streams.

This section aims to exclude all public waters without a local county zoning “shoreland classification." The Minnesota Department of Natural Resources estimates that this provision would remove 50-foot buffer protections from approximately 48,000 miles of Minnesota streams.

Section 4 also delays the deadline for having buffers on public waters for a full calendar year. We feel this amendment is unnecessary.

In many cases, buffers have been required under law since 1989. Additionally, the buffer law already includes an automatic one-year extension for landowners applying for financial assistance as that process can take time and those landowners deserve an extension. However, delaying all implementation of the buffer rule, even for those not requesting cost-share, simply delays implementation unnecessarily.

This section prohibits any enforcement of the buffer law unless public funding covers 100 percent of the cost of establishing and maintaining the buffers, including those 50-foot buffers on public waters that have required under the law since 1989.

While we support some cost-share assistance for landowners in need, this language risks placing all implementation of the buffer law at the mercy of inconsistent federal and state funding. Considering the state’s recent failures to adopt buffer funding through the tax bill (2016 session) and federal intentions to cut funding for most domestic conservation programs, this provision is troubling.

While some cost share for landowners in need is appropriate, we are very troubled that this section may affirm the unrealistic expectation that farm operators need only follow state laws and protect our shared water resources when the cost of doing so is covered, 100 percent, by taxpayers. This provision sets a potentially troubling and unsustainable precedent.

This section provides much-needed funding for counties and watersheds accepting jurisdiction to enforce the buffer law. This is a wise provision that provides local governments with the resources they need to make the buffer law a success.

At odds with public values

The problematic provisions in Sections 1, 4 and 5 are out of step with what Minnesotans want. A recent poll found that a majority of Minnesota voters from across the state “strongly favor” the buffer initiative law, with fully 82 percent of Minnesotans "strongly" or "somewhat" favoring the buffer law, and just 15 percent opposed.*

FMR understands that legislative timelines are tight, and committees aren't always able to post amendments early enough for state agencies and stakeholders to research all implications of major amendments. In this instance, the DE2 amendment was released after-hours and scheduled for a hearing the following morning. In an ideal world, such amendments would be brought forward early enough for all legislators and stakeholders to conduct a complete analysis of its impacts prior to providing testimony. FMR is hopeful that we can encourage legislators from both parties to offer major amendments to existing bills well in advance of upcoming hearings whenever possible.

Concerning environmental bills like this one are why FMR is a proud sponsor of Water Action Day.

Water Action Day (April 19, 2017) is Minnesota’s day of public action and advocacy to let lawmakers know we care about our water. This all-day event at the Minnesota State Capitol will include a rally, issue training and meetings with your legislators. Come for all or part of the day and let your voice be heard! Learn more and register here.

You can learn more about how to help protect our water by signing up to be a River Guardian. River Guardians receive legislative email action alerts and our e-newsletter, Mississippi Messages, and are vital to our efforts to protect and restore the Mississippi River and its watershed in Minnesota.

-----------------
* The survey of 502 Minnesotans was conducted February 1-5, 2017, by a bipartisan team — Public Opinion Strategies, which conducts polling for Republican candidates, and Fairbank, Maslin, Maullin, Metz & Associates, which specializes in polling for Democratic candidates — and includes a 5.3 percent margin of statewide sampling error. The poll conducted additional surveys in rural Minnesota to gain a fuller picture of public attitudes in these regions of the state.