A plethora of pollinators 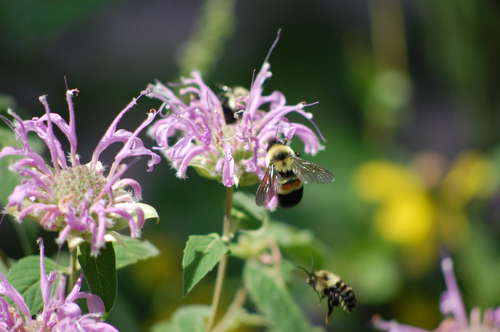 The rusty patched bumblebee, Bombus affinis, once common throughout the eastern U.S., has declined from 87% of its historic range in recent years.

With high summer upon us, and many flowers in bloom, nows a great time to see pollinators. Pollination can occur passively by wind and rain-splash, but also, plants have evolved a more effective way by tricking animals and insects into doing the job. Many different animals pollinate flowers, including butterflies, moths, bees, wasps, flies, beetles, ants, hummingbirds, bats, lemurs, and even mosquitoes! Of course pollinators are not providing their services for free. They get something in return: nutrient- and protein-rich pollen and energy-rich nectar. Pollination is a good example of mutualism, where both organisms benefit from the relationship/behavior.

During recent field work, Ive seen many different pollinators at work, including bumblebees, honeybees, wasps, sweat bees, carpenter bees, flower flies, thread-waisted wasps, swallowtails, monarchs, grey hairstreaks, skippers, ants, clear-winged moths, beetles, and ruby-throated hummingbirds, among others. The diversity is truly amazing! This year, it seems that pollinators were scarce at first, perhaps due to last years dry fall and deep frost and the long winter, but lately they have picked up again.

Interestingly, many native insects are better pollinators than non-native ones because they have evolved traits well suited for their local environments and plant resource base. For example, it takes about 250 orchard mason bees about the same amount of time to pollinate about an acre of an orchard as it would for 40,000 honeybees (two colonies), which were introduced from Europe.

Bees are the powerhouses of the pollinator world. There are about 4,000 bee species in North America. The great majority of those are solitary, meaning that they live alone or form only very small, isolated colonies. Most bees will not sting you. The few social species, those that form large colonies with divisions of labor, include bumblebees and honeybees. Sadly, bees have declined so much that today most orchards and berry farms have to pay beekeepers to bring in honeybee colonies.

Estimates of the value of the ecological services pollinators provide to humans range upwards of $15 billion annually. Wheat and corn, crops that do not depend on pollinators (they are wind pollinated) occupy vast fields that are like deserts to pollinators. Also, bees need undisturbed land to nest inthey like to tunnel in the ground or in stumps or dead trees (snags) or in big clumps of grassland that is being lost. 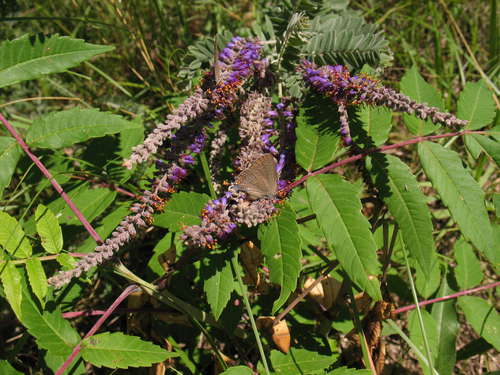 Decline of pollinators is actually due to a combination of factors, including loss of floral diversity and habitat, expansion of agriculture, introduction of invasive exotic plants, disease and parasites, climate change, and widespread use of pesticides and herbicides. Pollinators are keystone species, ones that many others depend on, and their decline affects just about every food web on the planet. Anything that eats fruits, berries, or seeds is going to feel the impact of their decline, including us. About one out of every three mouthfuls of food we eat is the result of animal-pollinated fruits.

Perhaps one of the more important aspects of what FMR does, through our Land Conservation work, is to work with landowners to preserve land that provides significant areas of natural habitat. Natural lands, especially those that contain diverse assemblages of native flora in native plant communities, offer flowers in bloom from early spring through late fall, in a variety of shapes, sizes, and colors, which is crucial for pollinators. Natural lands are also a potential source for agricultural lands that have lost pollinator habitat. In addition, they serve as refuge for pollinators that can potentially colonize degraded lands in the future.

If you want to help pollinators, and indirectly help yourself, plant a variety of native flowering plants in your yard or on your land. For more information, check out these great resources: The Xerces Society website; The Minnesota DNR Conservation Volunteer, July-August 2009; and the National Geographic Magazine, August 2013.