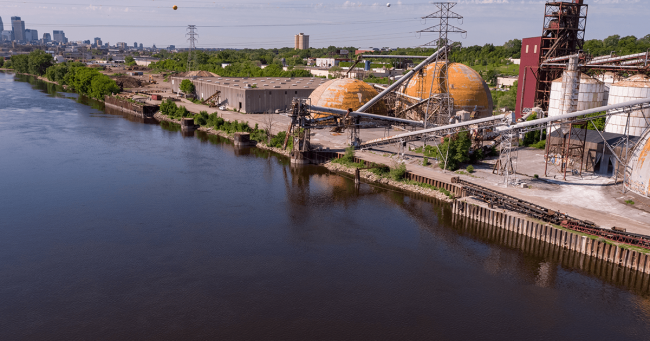 The Minneapolis City Council has approved the Upper Harbor Terminal redevelopment plan on the North Minneapolis riverfront, but it's already facing its first lawsuit over the project. (Photo by Tom Reiter)

When the city's Upper Harbor Terminal development concept was introduced in 2018, FMR stood alongside many other community members in opposition to the plan. We were concerned that the city's plan prioritized wealthy developers over community wealth-building and public park space. The state legislature gave $12.5 million in state taxpayer funds to First Avenue for a concert venue rather than neighborhood priorities.

Through years of advocacy, our coalition persuaded the city to make modest improvements to the plan. Most notably, the city agreed to keep the land under the development in public ownership. But our fundamental concerns remain.

Here's a quick video recap we made before the plan was approved outlining the benefits of the development and their costs:

Check out our full infographic here. (Illustrations by Kimberly Boustead and Emily Sauer)

However, the city is already facing a lawsuit over the project. The North Minneapolis-based Community Members for Environmental Justice (CMEJ), with legal representation from the Minnesota Center for Environmental Advocacy (MCEA), has filed suit alleging that the project's environmental review was inadequate. (Read coverage on the lawsuit by Sahan Journal, Star Tribune, and MPR News.)

This isn't the first legal challenge of the city's planning process. Earlier this year, the city attempted to approve the Upper Harbor Terminal coordinated plan before the environmental review was even complete — a clear violation of state law. After pushback from CMEJ, MCEA, FMR and others, the city delayed its vote on the coordinated plan until the review was complete.

It's not clear how the city will respond to this new lawsuit. We hope they will conduct a more complete environmental review that responds to community concerns. This review should include a more genuine examination of alternative development scenarios, greenhouse gas emissions, and climate impacts. The review should also consider whether changes to the project could better mitigate environmental impacts.

Become a River Guardian to hear from us about more opportunities to act when city and state leaders will make important Upper Harbor Terminal and river-related decisions.

For more about Upper Harbor Terminal, check out our past updates or contact Colleen O'Connor Toberman, River Corridor Program Director, at ctoberman@fmr.org or 651-222-2193 x29.