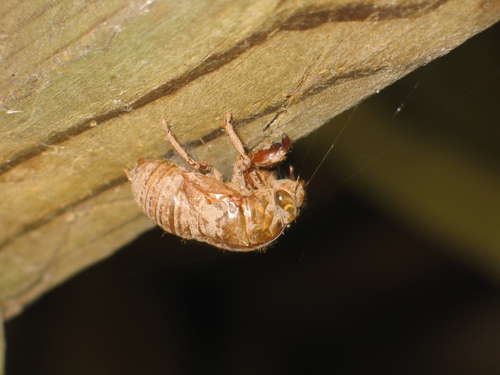 I was frolicking in my back yard the other day as I am want to do on a lovely late summer afternoon when I noticed what I can only describe as globs of several creatures clinging to the support beams of my deck. After a momentary battle between my inner slacker that wanted to continue the full out frolic I had going on and the naturalist in me that wanted to further investigate, I stepped up to have a closer look.

They were hideous. Holy Moly, Batman, I exclaimed, we're being invaded by alien creatures that have slipped out of their skin and probably morphed into some unspeakable horrific mature alien life form bent on world domination! Honey, grab the kids, the dog, the guinea pig and the gold fish and lets get out of here. ... Second thought, leave the gold fish to temporarily appease the creatures hunger to give us time to make it to the airport.

And with that, I hightailed it out of there. ... sort of. After a second or two I realized that my imagination may have gotten the better of me. Putting my life on the line for science, something that I will periodically and altruistically do for humankind, I returned to the site.

Well, upon further examination I did confirm that these little globular packets of fun were indeed the cast off skin of some creature. Actually, they were exoskeletons (external skeleton that supports and protects the body) of something that crawled up the timber, split itself right down the middle and emerged as something, yet to be determined. ??I trotted back inside to my laboratory, grabbed my hazmat suit, tweezers, and a Petri dish and returned to the scene. Plucking one of these brownish thingies off of the post, I returned to the lab and started a full-scale scientific investigation. Turns out these weren't alien brain suckers after all, but the exoskeleton of the annual or dog-day cicada (Tibicen spp.).

These cicadas are members of the insect order Hemiptera, which also include leafhoppers, aphids and boxelder bugs and show up in late or dog days of summer. and instead of them crawling into our ears when we sleep to suck out our brains, things go the other way around: many humans around the world eat cicadas.??After mating, the mother cicada lays her eggs into small tree branches. When they hatch, the nymphs fall to the ground and burrow into the soil. Cicada nymphs then spend the next couple of years sucking the life juices from tree roots and growing. On the appropriate night the nymph will burrow out of the soil, climb onto a tree trunk (or some poor guys porch post), split its exoskeleton and emerge as an adult.??You will know if these little darlings are in your neighborhood because you will hear the males love song. The males have two vibrating membranes on the sides of their abdomens that they use to emit an extremely loud raspy, whiny noise. Sit back with a glass of your favorite evening beverage and listen to the love in the air.

For a sample of what this beautiful and intimate love song sounds like, visit the University of Michigan cicada site or check out the cicada soundtrack at www.InsectSingers.com. ??More pictures of adults emerging from their nymph skeleton are available from the Great Plains Nature Center.

Additional cicada information is available from the ?Minnesota Department of Natural Resources' Young Naturalists site and, of course, ?www.CicadaMania.com.