Conservation Success on the Sand Coulee: A Familys Story | Friends of the Mississippi River
Skip to main content

Conservation Success on the Sand Coulee: A Familys Story 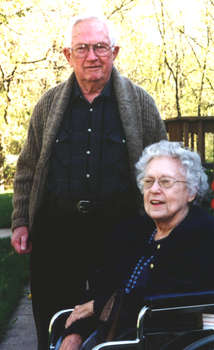 A major land conservation success in the Sand Coulee of Dakota County is embedded in the Minnesota roots of the two people who initiated it, Joseph and Joanne Murnane. Thanks to the Murnanes love of the land, Minnesotans are receiving a major gift of seven additional acres of a rare and recovering ecosystem in the Mississippi River watershed. The land their children inherited was recently gifted to the Minnesota DNR as an addition to the Hastings Sand Coulee Scientific and Natural Area.

Both Joseph and Joanne Murnane were native Minnesotans, he from White Bear Lake and she from Bald Eagle Lake. My father in particular was always a Minnesota chauvinist, daughter Susan said. He was always proud of Minnesotas natural beauty and progressive traditions. My parents married toward the end of World War II and lived on Bald Eagle Lake for many years. My father loved the outdoors, loved to sail in Bald Eagle Lake, to camp and canoe the north country, especially the BWCA and the Quetico. Only later did he come to appreciate prairie.

Although career demands took the Murnanes out of Minnesota from 1963 to 1970, the moves didnt separate the family from the natural world. We lived in western New York from 1964 to 1968 and we would sail Lake Erie and the Finger Lakes, Susan remembered. We would camp and canoe in the Algonquin Provincial Forest and the Allegheny National Forest. We used to go to the Cape Hatteras National Seashore regularly. We went there for the first time one of the very first years it opened to the public. Dad was so proud that the national government had the good sense to buy up those barrier islands and keep them wild (mostly).

After the Murnanes returned to Minnesota, Joseph took on a job as a manufacturers representative, roaming over the prairie country of Illinois, Iowa, Nebraska, Wisconsin, and the Gopher State.

He became aware of and fascinated by the birds, wildlife, flowers, and grasses of the prairie, Susan remarked. When he started thinking about retirement, he and Mom looked for a good lot to build the house of their dreams on. A view has always been important to them, especially a view with birds, and they originally looked for a lot with Mississippi River views. When they saw the lot with its overlook of the Sand Coulee, however, they fell in love with it. They built their home and moved in 1987. They lived the last chapter of their lives very happily there. 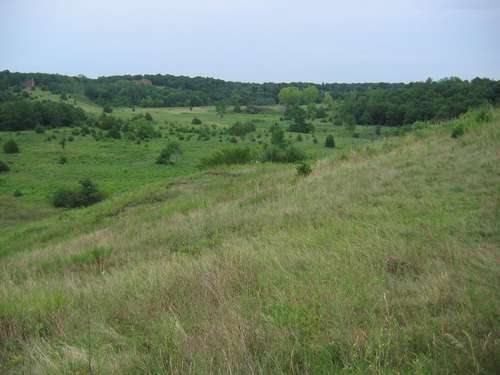 Neighbor Ken Kossan is pretty sure he met Joe when both went into the woods out back to chop some timber for heating fuel. He was a steward of the land, a real conservationist, Ken said. You could tell that right away.

The Coulee is special. It contains high quality dry prairie. Dakota County once contained several hundred thousand acres of prairie which developed deep, rich and fertile soil. As the county was settled, the prairie was quickly converted to cropland. Only about 550 acres of prairie remain in Dakota County. Today, the Sand Coulee contains the largest prairie remnant in the county.

Around 1990, Joseph Murnane heard of a prospective buyer for a portion of the Sand Coulee who intended to mine the land for gravel. He fought the proposed rezoning, found the owner, purchased the 42 acres, and divided it in even parts among five neighboring landowners and the Murnanes, selling it to them at cost. The deeds specified that there would be no permanent structures and no paved roads, and that the lots could be sold only with the house lots except with the permission of the Marshan Township board.

Susan said that for her mother, The prairie was freedom. She couldnt get around very well. She had bad knees for years, and then broke her leg in an automobile accident a number of years ago and it never healed well. Then she lost her legs to peripheral cholesterol disease and was wheelchair bound. But she could watch wildlife and birds from her kitchen and living room windows overlooking the Sand Coulee. The view and the sky changed constantly and was always beautiful. The coulee was like a beloved companion to her.

Wildflowers bloom and native grasses thrive in the Sand Coulee, just one year after a prescribed burn.

Neighbor Ken Kossan continues a tradition started by Joe; there are 38 birdhouses on the coulee land that he maintains and watches. Hes kept a log for three years of frequent nestings by bluebirds, ground swallows, and house wrens.

FMR worked with Joe and Joanne Murnane for a number of years to restore and manage the prairie that was on their property, says FMR Conservation Director Tom Lewanski. They both had a very strong land ethic. They were also wonderful people to be with.

When the Murnanes passed away within two years of each other, Lewanski said, he approached their children about formally protecting the prairie as a tribute to their parents, who genuinely loved the prairie.

Says Susan Murnane: When Tom Lewanski told us that the state would be interested in acquiring our piece of the sand coulee prairie, we were thrilled. It seemed such a fitting memorial for such fine people. We are delighted to give it outright to DNR, because its eligible for the RIM [Reinvest in Minnesota] program so a gift doubles the conservation impact.

Joe and Joannes land ethic certainly rubbed off on their children, who are ensuring that the rare prairie on their familys land is protected forever. The siblings have also been very smart about how they went about protecting this land. They first donated a conservation easement to the Dakota County Farmland and Natural Area Program and then gifted the fee title to the DNR. The land has two layers of protection. Lewanski added. Neighbor Kossan says as a successful professional who sold castings, No matter what Joe did, he made it better. Which is what he did with the coulee.

FMR ecologist and project manager Karen Schik observed: Joe and Joanne were truly delightful people and quite an inspiration. In spite of significant health problems they were still the most engaged in the prairie restoration efforts at the coulee and the neighbors clearly looked to them for their gentle leadership. I think its wonderful that their legacy will include protection of this piece of land they so loved.

Adding the Murnanes property to the Hastings Sand Coulee Scientific and Natural Area is fitting in another sense. Dad didnt need to own land. He always felt that the earth belonged to everyone in usufruct, and it was better to hold wilderness in the public trust than to try to own it, daughter Susan said.

What will the land look like in 50 or 100 years? Says neighbor Kossan: All the non-native trees will be gone and it will look like it did a couple of hundred years ago.

Thanks to the Murnanes and conservation-minded neighbors inspired in part by their example, it might just happen.