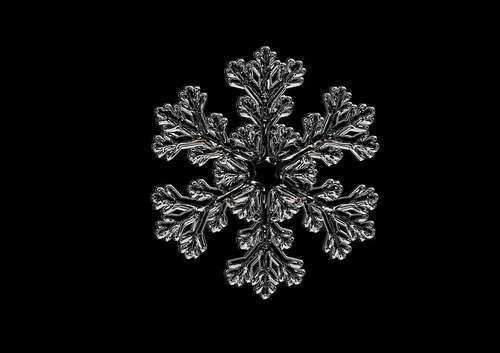 Removed from the crowd, the individuals individuality can sparkle

How snow forms and ages is both an interesting academic area of study and pertinent to the practical activities of everyday life.

A cloud is a mass of water droplets floating in the air. Somewhere around 14º F some of these droplets start to freeze. Each frozen droplet is surrounded by water vapor, which condenses onto its surface and before you can say, Im freezing, a snowflake has formed. As water condenses onto the surface of the droplet it develops facets (a small plane surface) becoming a hexagonal prism. I kid you not. As the crystal grows, branches form on the hexagonal facets developing into the general snowflake design we all know and love. This is obviously an over simplistic explanation, but I only have so many words and I know my readers attention is not infinite.

As the snowflake grows, it becomes heavier and begins to fall to the ground. Once on the ground the crystals, and therefore the snowpack they are a part of, go through changes. Warmer temperatures cause the branches to evaporate which changes it from the intricate 6-branched crystal to a more rounded creature.

Snowfalls throughout numerous events over several months and layers develop with each one in its own state of metamorphosis. The upper layers may still contain crystals that have their branches mostly intact, while the lower ones contain crystals that have lost their branches because of physical action of the crystals around and above them, and heat from the ground. Over time the snowpack, which initially contains many air spaces, compresses making it denser. Grab a hand lens and go investigate for yourself.

There are many internet resources to learn more about snow:

Out of the bosom of the Air,
Out of the cloud-folds of her garments shaken,
Over the woodlands brown and bare,
Over the harvest-fields forsaken,
Silent, and soft, and slow
Descends the snow.

Even as our cloudy fancies take
Suddenly shape in some divine expression,
Even as the troubled heart doth make
In the white countenance confession,
The troubled sky reveals
The grief it feels.

This is the poem of the air,
Slowly in silent syllables recorded;
This is the secret of despair,
Long in its cloudy bosom hoarded,
Now whispered and revealed
To wood and field.