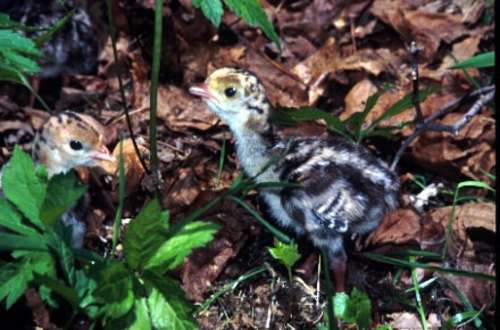 Within 24 hours baby turkeys or poults are fully mobile and even starting to play.

Photo: courtesy of the Ohio DNR

Picture this: youre walking through a prairie restoration one fine day in late June, minding your own business and admiring the tall native grasses that have grown in so thickly. Its easy walking on level ground, but then your foot lands on something a little higher, and softer, than normal. You wonder if a rotting tree trunk was underfoot and look down to see what it could be. Just then, that rotting log explodes under your foot in a flurry of wings and feathers as a turkey hen flees from your presence. Barely able to comprehend what just happened, you peer into the grass to see seven large eggs lying in a hovel  all perfectly safe.

As you may have guessed, I didnt just make up this crazy story, but did, in fact, tread on a wild turkey! Such are the hazards of an ecologists work. I would not normally consider turkey nesting as a phenological event for late June, but its hard to refute the evidence under ones feet. So there you go  its turkey-nesting season.

Typically, wild turkeys (Meleagris gallopavo) nest in April in Minnesota, with chicks, called poults, hatching in May after about 28 days of incubation. If the first nest attempt fails, however, the hen will lay a second clutch, but raises just one brood per year. Young males, called jakes, remain with the hen until late fall when they equal or surpass her in size, while the females, called jennies, stay until early spring.

After hatching, turkey poults grow up very quickly. Within 24 hours they are fully mobile and even starting to play. Apparently their favorite game is Grab and Run: find a large food item  too large to swallow  grab it, and run like crazy. This will entice your siblings into a chase, as they try to snatch the food away. By just two weeks of age, the little poults can fly, at which time they begin roosting in trees at night. Until that time, they all seek shelter under the wings and tail of the hen. Poults eat insects, berries and seeds, while adults will eat anything from acorns and berries to insects and small reptiles.

Fun fact: For reasons beyond me, people have come up with names for flocks of different bird species  a gaggle of geese, a kettle of hawks, a murder of crows (scary!) or, my favorite, a wake of vultures. A group of turkeys is called a rafter.