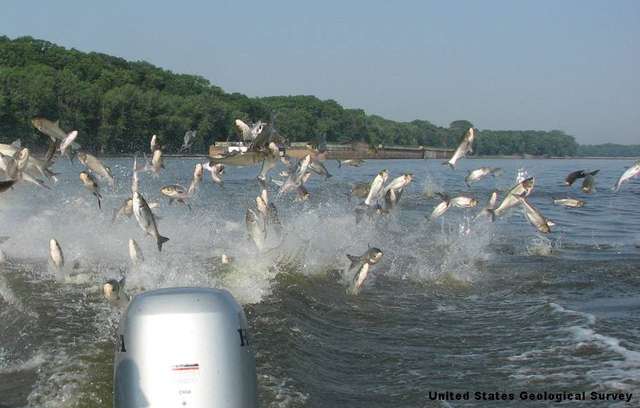 Silver carp will jump up to 10 feet if they are startled, and their presence has decimated recreational boating in some parts of the U.S.

There is good news and bad news on the invasive carp front. First the good news. We learned last week that Rep. Keith Ellison had succeeded in adding language to a larger water resources bill that would close Upper St. Anthony Falls lock within a year of the passage of the bill. This language matches an amendment added to the companion bill in the Senate by Sen. Klobuchar. The Senate version has already passed so this measure has a real chance to become law.

Now the bad news. Another silver carp (one of four species of invasive carp) was found in Minnesota last month  further north than the one found a little over a year ago near Winona. Although still relatively rare in these parts, silver carp are now famous for their ability to leap up to 10 feet above the surface of the water and injure boaters. The most recent specimen was found dead atop the lock wall. As usual, there was a flurry of alarm bells that were quickly echoed by news outlets across the region (see links below).

While these articles stress the concern about the silver carp jumping over dams, the fact is that most of these fish will pass through the locks or through the gates when they are lifted out of the water, so it is possible that other Silver carp have already passed Lock #5. That means adult silver carp might already be in Pool 5 and continuing their upward march towards Lock #4 (Wabasha). There is no dispute, however, that invasive carp are in Minnesota, and there will be a breeding population soon.

We have no time to waste in terms of taking action to stop them. We must close the Upper St. Anthony Falls lock immediately, and we must work in earnest to find solutions for protecting the Minnesota and Saint Croix Rivers before it is too late. This is why the news about progress in the House on the lock closure legislation is so important. Fortunately, this legislation enjoys bipartisan support which makes its passage more likely but it is still not clear whether the House bill (called the Water Resources Reform and Development Act) will have the votes needed to clear the House.

Meanwhile, the Star Tribune issued an excellent editorial last week calling on the House to pass this provision into law.

Please help FMR and the Stop Carp Coalition keep the pressure on Minnesota's Congressional Representatives. This legislation should have 100% of Minnesota's delegation behind it. Please urge them to support and help pass the Water Resources Reform and Development Act (H.R. 3080). Unanimous support form Minnesotas delegation will demonstrate the extreme urgency of this threat to Minnesota's waters.