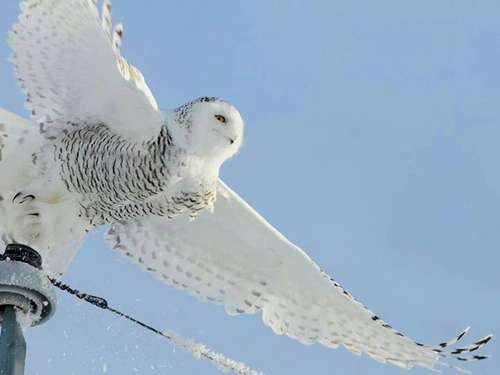 I know, I know  weve talked about irruptions before. But not snowy owl irruptions! And especially not the biggest snowy owl irruption in decades! According to Project SNOWstorm, winter 2013-14 is the largest irruption in the Northeast and Great Lakes regions in four or five decades. Snowy owls have been reported as far south as Florida and Arkansas, and even on Bermuda. The airwaves are all a-flutter with the news, and birders are flocking to reported sightings. But first, a definition...

So what is an irruption? No, not eruption  thats what volcanos do. And zits (hey, its in the dictionary!). Irruption, as it refers to animal populations, is a sudden increase in numbers. Snowy owls nest, of course, in the arctic, and typically fly south to overwinter in Canada and northern Eurasia. Periodically, usually every few years, large numbers of birds will move further south, showing up in places where they are seldom seen, and that is an irruption. It happens with many other species as well, notably finches, but not necessarily in the same year or for the same reasons.

The next question, of course, is why. It has long been thought that a low prey population will send the owls farther south in the winter, looking for food. But 2013 produced a bumper crop of lemmings and snowy owls feasted on them (see this Project SNOWstorm article for amazing photo of the owls lemming gluttony). The implication is that an abundant food supply may result in a very large owl population, causing them to spread out farther during the winter.

In the Twin Cities area, snowy owls have been particularly abundant in Dakota County where they are easy to spot in open farm fields. Dont miss out  let this irruption disrupt your regular routine to see these amazing birds! For recent sightings, go to the MOU-net tab at the Minnesota Ornithologists Union.