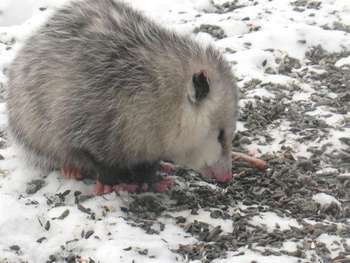 A small group of opossum (Didelphis virginiana) appeared under our bird feeders in early January last year. They are solitary creatures, so this was likely a mother and her young. They showed up regularly over a couple weeks, even as temperatures dipped below zero. They were clearly suffering from the cold and we wondered why they were out. Opossum do not hibernate, but they do stay in dens like many other animals in winter. They are well-adapted to food scarcity, and can survive losing up to 45 percent of their weight over winter. Still, they must eat at some point, and apparently our opossums were hungry enough to face the cold.

Previously found only in southern Minnesota, opossum have been gradually expanding their range north, and are now common north of the Twin Cities. The cold weather is tough on them and frostbite is common. They only live about a year or two, but females are sexually mature at six to eight months and can produce two or three litters per year.

Many people dislike opossum, but theres no denying they are rather fascinating creatures. Somewhat rat-like in appearance, they are the only marsupial in North America and more closely related to kangaroos than rats. Their opposable thumbs  front and back feet  and prehensile tail are all helpful for grasping and climbing. They have 50 teeth  more than any land mammal in North America  which they use to consume just about anything, including insects, snails, mice, rats and roadkill. Although opossum have a relatively small brain cavity, some studies have ranked them above dogs in intelligence and more or less on par with pigs.

For many more fun facts try these websites: