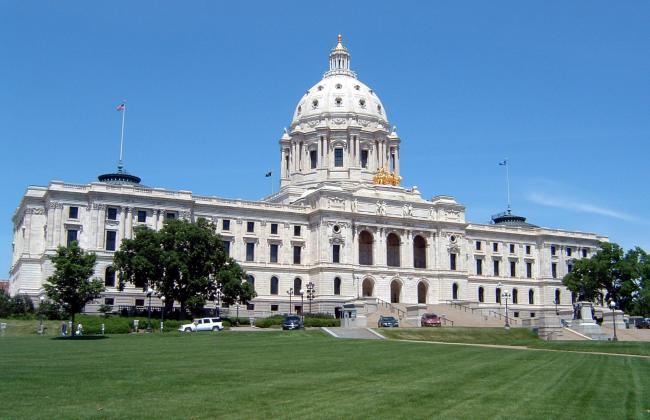 The bill makes no progress on water quality and includes a handful of rollbacks to existing environmental policy. However, thanks to the FMR River Guardians and Minnesotans from all corners of the state and walks of life, many of the worst provisions were removed during final negotiations with the Dayton administration.

The original environment bill (HF 888) was one of the most sweeping anti-environmental bills to advance at the Capitol in many years. Luckily, it was vetoed by Gov. Mark Dayton on May 12.

The bill was sent back to legislators and subsequently rewritten (as SF 844) following negotiations between the Dayton administration and the bill's co-authors: Rep. Dan Fabian (R-Roseau) and Sen. Bill Ingebrigtsen (R-Alexandria).

The 144-page revised bill appropriated money to state agencies for the next two years and included 108 pages of additional policy items.

The revised bill moved swiftly. It was posted late on Sunday and heard in conference committee by 7 p.m. Following committee adoption, it passed in the Minnesota Senate 42-25, and in the House 83-51 a short time later. Dayton signed it into law Tuesday, May 30th.

So, what’s in, what’s out, and where does the money go?

However, the bill has a major flaw:  it cuts $22 million in base program spending for local Soil & Water Conservation District (SWCD) operations. Legislators offset this by raiding $22 million from the Clean Water Fund (Legacy Amendment money) in violation of both the Legislature’s previous promise to taxpayers[*] and the clear constitutional prohibition on substituting Legacy funds for general fund sources.

As a result, this accounting shift effectively defunds $22 million in drinking water and surface water protection across the state — 10% of the Clean Water Fund!

We are greatly concerned about what this means for the long-term integrity of the Clean Water Fund and the Legacy Amendment overall. Despite our efforts, we were unable to get legislators to keep their promise and fund SWCD conservation through this bill. FMR is disappointed that, despite a large state budget surplus, legislators chose to raid constitutionally protected Legacy Amendment money to fund local government administration.

The law includes several troubling rollbacks to environmental protections and citizen rights. FMR staff, River Guardians and our coalition partners strongly opposed these provisions, but we were unable to remove them from the final bill. Some of these troubling provisions include:

(2) Polluter prepared environmental review (EIS) (Sec. 140)
This provision lets the fox guard the henhouse. It allows polluters to pay to write their own draft Environmental Impact Statement (EIS). This is especially problematic because underlying draft EIS data is not subject to the Data Practices Act when prepared by a private regulated entity. This reduces public transparency and accountability of permitting.

Examples of those who would lose their right to contest mine permits include:

While Rep. Dan Fabian (R-Roseau) noted on the floor that "the mining industry is very excited about our bill,” everyday Minnesotans should not be pleased with provisions that deny them their longstanding right to challenge mining projects that can impact our state’s waters for generations to come.

(5) Wastewater treatment plant effluent limit holiday (Sec. 159)
This provision exempts cities that build public water treatment facilities from having to make technological updates to comply with clean water standards for 16 years. This undermines the state's ability to protect our water from known and future contaminants that harm our health and environment.

(6) Rare wetland protections (Sec 112-113)
Calcareous fens may now be “temporarily” damaged by irrigation pumping under a plan approved by DNR. The future of the state's protection of rare calcareous fens now depends completely on the willingness of DNR Commissioners to stand up for these rare wetlands. This weakens the previously strong protections for these wetlands dating back to the 1991 passage of the Wetland Conservation Act. 98.16.

(7) Lead shot rulemaking delay (Sec 164)
This provision delays the use of state authority to reduce non-target mortality of birds (including bald eagles) and wildlife exposed to lead shot. The delay expires in 2019.

Steel shot is readily available, performs similarly as lead, costs the same or less, and is non-toxic to birds and wildlife that ingest it. Modern ballistics have developed many superior ammunition loads and restricting the use of toxic lead shot makes environmental sense and does not impact Second Amendment rights.

FMR and our partners are very thankful that a handful of the worst environmental provisions in the original (vetoed) bill were removed before re-passage. Some of the provisions that were removed or significantly altered include:

(1) Buffer Rollbacks (altered or removed)
Five provisions aimed at undermining critical components of the governor's buffer initiative were removed or altered from the final version bill.

(2) Limiting the Environmental Quality Board (altered)
Language from the Chamber of Commerce advanced early in the session sought to completely dissolve the EQB. The final provision instead modifies the makeup and duties of its citizen members.

(3) Scientific Re-Review (removed)
This unusual provision, advanced by the Coalition of Greater MN Cities, was intended to allow cities to petition for a “re-review” of agency science used in virtually any proposed or final agency water management action. The science would be required to undergo reevaluation by an Administrative Law Judge (i.e., not a water resource scientist), assisted by a review panel that excluded anyone “directly or indirectly involved with the work…of the agency.”

We are thankful this troubling provision was removed. Otherwise, it would have:

(4) The presumption against agency guidance (removed)
Agency guidance, policy, and other interpretations provided are intended to answer common questions, typically from regulated parties, about how the Minnesota Pollution Control Agency's rules and state law would be applied. This provision established a presumption that all MPCA as well as Department of Natural Resources guidance documents, policy or interpretation are invalid and un-promulgated “rules” that must undergo rulemaking at public expense. This would have made it much more complex, time-consuming and expensive to providing basic guidance on environmental regulations – the opposite of streamlining.

(5) “The plastic bag ban ban” (removed but passed in another bill)
Language prohibiting local governments from banning or placing fees on plastic bags was removed in this bill. This would have pre-empted local authority and the will of local voters, not to mention barring implementation of a proven method of reducing pollution and protecting habitat. Unfortunately, the language was included in a separate Omnibus Energy & Jobs bill, which became law on May 30th.

A note on process

FMR understands that legislative timelines are tight and negotiations between two chambers and the governor’s office can be time-consuming. As a result, conference committees aren't always able to post final language early enough for the public (and fellow legislators) to fully review bill language before action is taken on the bill.

However, this session continued a frustrating pattern of final-weekend revisions (or late night special session negotiations) to massive policy and finance bills getting pushed through the House and Senate before legislators and the public had a chance to read them. This process makes it difficult for the public to follow along and weigh in on such important bills.

For example, the final 144-page environment bill was distributed to the public less than 90 minutes before its Sunday evening conference committee hearing and then voted off the floor of the House and Senate before many legislators had the opportunity to read the bill.

While FMR staff was able review the bill and share our perspectives in advance of the floor sessions, it’s not reasonable to expect legislators or the public to conduct such an analysis in so little time.

FMR remains hopeful that in the future, legislators will distribute draft omnibus bills at least 24 hours before conference committee hearings, and leave plenty of time for all legislators and stakeholders to fully review these omnibus bills before taking them up on the floor

The real stars of the legislative session are the FMR River Guardians and fellow advocates.

The original environment bill was one of the most far-reaching anti-water bills in a generation. Luckily, hundreds of Minnesotans showed up for Water Action Day and continued to voice their support for clean water during the session. With your support, we were able to secure a veto of the original bill, followed by removal of many of the worst provisions before final passage.

Self-governance can be a messy enterprise. Differing viewpoints, values and priorities can make progress on important issues slow and frustrating. While very little good came of this session, we are proud of the way Minnesotans from all corners of the state and walks of life came together to demand that legislators do more to protect our rivers, lakes and streams. That is, perhaps, the most important victory of the 2017 legislative session.

FMR is deeply grateful to our River Guardians across the state that helped us defend our natural resources this session. Thank you!