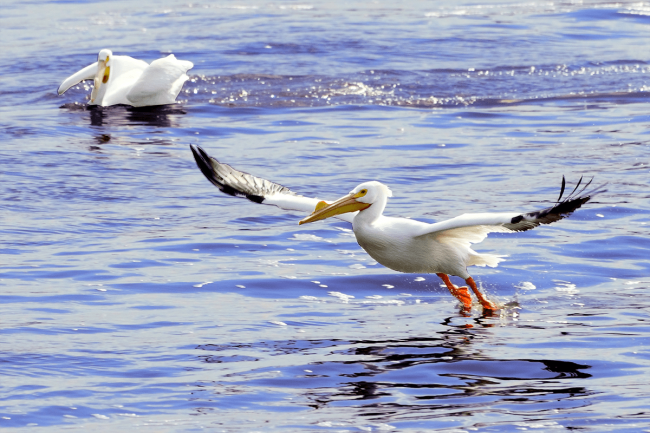 The Mississippi River is a critical habitat highway or "flyway" for pelicans and hundreds of other bird species.

As river lovers, we understand that the Mississippi River is a vital ecological, economic, recreational and cultural resource that continuously serves our communities. The river supports 879 wildlife species, and roughly 20 million Americans in 50 cities rely on it for drinking water.

One of the most exciting parts of the emerging legislation is the ever-growing list of organizations signing on in support. Just as the bill's co-sponsors represent the river's reach, so do the groups lining up to support it.

To date, more than 65 organizations are backing MRRRI, from the National League of Cities to the National Wildlife Federation, and from Healthy Gulf in New Orleans to the Minnesota Well Owners Organization here in Minnesota.

You can see the full list of endorsing organizations here. And if you're with a group that would like to endorse MRRRI, please do!

And if you haven't yet, please take a moment to join our action alert as an individual to show your lawmakers that you support for this new federal program to protect the Mississippi River.

As reported by the Star Tribune and in Congresswoman McCollum and FMR’s Executive Director Whitney Clark's commentary, MRRRI would be a place-based federal program modeled on the highly successful Great Lakes Restoration Initiative. It would enhance federal river restoration and resilience funding for projects and program activities in the 10 states that border the Mississippi River.

When passed, the MRRRI Act would authorize an estimated $300-$350 million annually in federal grants to states cities, tribal governments and nonprofit organizations to improve water quality, restore habitat and natural systems, reduce aquatic invasive species and build local resilience to natural disasters in and along the Mississippi River.

MRRRI investments will be informed by a five-year Action Plan, which will be developed in partnership with river stakeholders through a robust EPA-led public input process. Likewise, investments in research and river science will be informed by the development of a Mississippi River Science Plan led by the United States Geological Survey in concert with the nation’s leading river science experts.

MRRRI would fill a clear gap in our nation’s regional restoration initiatives, highlighting and reinforcing the Mississippi River as an ecosystem and economic engine of national importance, and providing the resources our communities need to improve their health and resilience.

We are optimistic that by funding community-driven projects and the jobs that come with them, rather than creating new regulations or policies, both sides of the political aisle will embrace the MRRRI Act.

FMR readers know that the journey toward centering environmental justice and racial equity is a priority in our work, and that extends to MRRRI as well.

MRRRI will help address well-known equity and environmental justice issues along the river by ensuring that at least 25% of funds will be directed to river projects in communities of color or low-income urban and rural communities that bear a disproportionate impact of river pollution or degradation.

An additional 10% of funds would be directed to river projects in communities that experience persistent poverty.

Over the last two years, FMR has been at the heart of this effort.

We're proud to be a founding member of a growing group of organizations to support the bill: the MRRRI Collaborative. We provide day-to-day staff organizing and communication support as part of the collaborative's campaign team. And FMR’s own Whitney Clark currently co-chairs the Steering Committee providing key strategic leadership for the collaborative.

We plan to continue working to maximize MRRRI’s positive impact on the river – and river communities – in the years to come.

How can I help?

The best way to help make MRRRI a reality is to sign our MRRRI petition. This is your opportunity to let federal lawmakers know you stand with the river.

In addition, FMR will be reaching out to FMR River Guardians and others over the course of the next year, urging them to reach out to their members of Congress to ask them to support MRRRI.

Sign up to be a River Guardian to receive email action alerts when we need your help the most, plus invitations to educational happy hours and other events.