Our letter to Gov. Dayton on the Environmental Trust Fund raid | Friends of the Mississippi River
Skip to main content

Our letter to Gov. Dayton on the Environmental Trust Fund raid 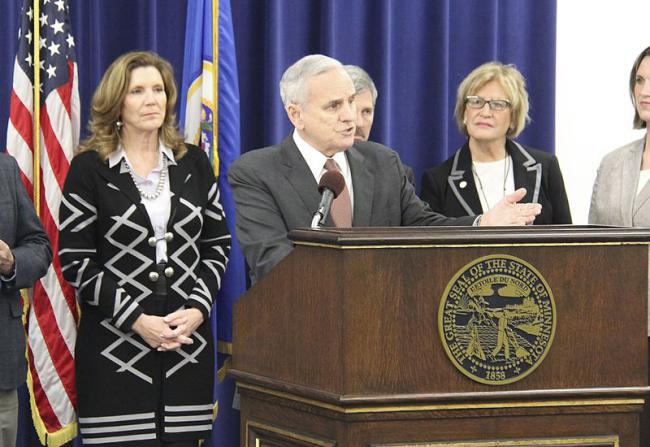 FMR and our allies sent the letter below to Gov. Mark Dayton, asking that he veto the raid of Minnesota's environment trust fund. Learn more from the Star Tribune or FMR's Legislative Updates blog.

On behalf of the undersigned organizations, we write to urge a line-item veto for all projects in H.F. 4425 that are funded through appropriation bonds by raiding the Environment and Natural Resources Trust Fund (ENRTF).

Since 1963, approximately $900 million has been appropriated from the Fund to more than 2,000 projects that protect and enhance Minnesota's environment and natural resources. Throughout its history, we have advocated to ensure that ENRTF funds are spent in ways that are both constitutionally and statutorily appropriate.

The state’s official debt capacity supports capital investments far in excess of the $825 million passed by the Legislature. We are disappointed that they chose instead to use the same unnecessary gimmick they rejected in 2009 when Governor Pawlenty proposed using the ENRTF to back appropriation bonds for the purchase of what is now Vermillion State Park. Much like in 2009, most of the funding from these proposed bonds is targeted to projects that are important priorities for which we have advocated. However, we cannot jeopardize the long-term future and viability of the Trust Fund to backfill the diminished bonding bill the legislature chose to pass.

Bonding costs for all of these projects have traditionally been provided through general obligation bonds, and there is no precedent for using the ENRTF for this purpose. Moreover, the proceeds from the proposed bonds are targeted to some purposes that are expressly excluded from eligibility, including wastewater infrastructure and hazardous waste cleanup. H.F. 4425 contains sweeping changes to laws that have been in place since 1988 when voters first chose to dedicate these funds for very specific purposes that protect our Great Outdoors for future generations. This language was developed in the original legislation authored by Senator Roger Moe and Representative Willard Munger, and is now not only part of our state’s legacy, but also theirs.

The fiscal viability of this raid raises serious concerns. The interest costs alone on $98 million of appropriation bonds could be in excess of $60 million in additional costs to the ENRTF over the 20- year period. No fiscal note that outlines any of these costs or their impacts on the fund was ever provided for consideration. H.F. 4425 raids the fund until 2040, though the funds’ revenue source constitutionally expires on December 31, 2024.

Despite this dramatic and permanent change to the ENRTF, and despite its potentially far-reaching financial consequences, this proposal was not properly vetted by members of the public or the Legislative-Citizens Commission on Minnesota Resources (LCCMR). A provision that raided the ENRTF was first introduced in the Senate Finance Committee on May 14, and no public testimony was allowed during that hearing. Minnesotans expect and deserve an opportunity to voice our concerns and opinions about such a redirection of constitutionally-dedicated funds.

Attached is a letter to legislators outlining the strong objections of 39 organizations that we circulated as the bill moved closer to passage. Final passage of H.F. 4425 is not the end of our important conversation with our members, and with all Minnesotans, about the need to fully restore the ENRTF to its original purpose. A line-item veto of projects funded by the ENRTF is critical in holding the fund harmless from two decades of debt service and interest payments and to send a strong message to prevent similar raids in the future.

We encourage you to respect the intent of Minnesota voters, reject this unprecedented and unnecessary tactic, and line-item veto the projects funded by raiding the Environment and Natural Resources Trust Fund.