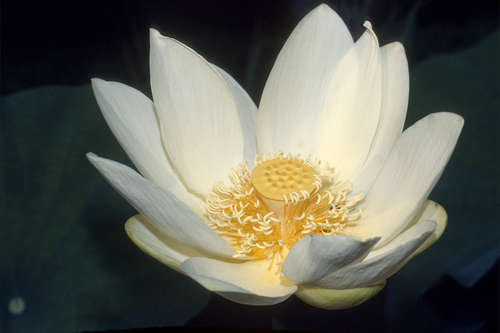 Since ancient times, the lotus has been a powerful spiritual symbol  of enlightenment, awakening and rebirth  by various cultures and spiritual teachings. Most of those references were to the sacred lotus (Nelumbo nucifera) in Asia. The American lotus (Nelumbo lutea), however, is no less lovely. To witness its blooms is considered by some to be an otherworldly experience. You can judge for yourself as the plant blooms in Minnesota in July and August. It is primarily found in back channels and quiet waters along the Mississippi River south of St. Paul, but it is also found in a few Twin Cities lakes, where Native Americans may have planted it for food. Beyond Minnesota, American lotus occurs in the eastern half of North America from Ontario to Texas, as well as California, parts of Central America, and into northern South America.

Lotus was an important food source for Native Americans, as virtually the entire plant is edible. The starchy tubers were baked like sweet potatoes, very young leaves were cooked and eaten like spinach, and immature seeds were eaten raw. Mature seeds could be shelled and the kernels roasted and eaten like nuts or ground into flour.

Today, the interesting seedpods are often used in dried flower arrangements. However, American lotus is protected in Minnesota under the Conservation of Certain Wildflowers statute: No person shall distribute... lotus (Nelumbo lutea), which have been collected in any manner from any public or private property without the written permission of the property owner and written authorization from the commissioner.

A whopping six to 10 inches in diameter, the American lotus flower is the largest of any plant in North America. Platter-sized leaves grow up to 20 inches in diameter on stalks up to six feet above the water surface. Each flower closes at night and lasts only two days, during which time it emits a wonderful sweet fragrance. After the petals drop, the flat disk at the center of the flower  the pistil  continues to grow and eventually reaches a diameter of about three inches. In the flat disk are about 20 holes, each containing a seed. The seedpods bend over and fall into the water where they rot and release their seed.