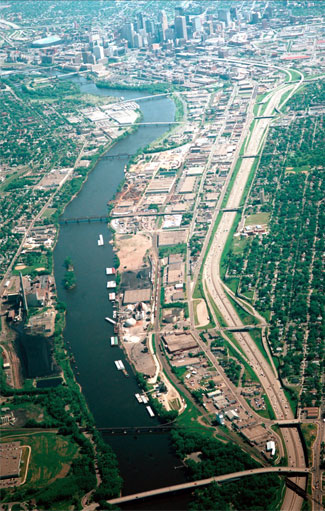 Aerial view, from the north, of the Mississippi River above Saint Anthony Falls.

Since our founding, Friends of the Mississippi River has actively participated in discussions and plans related to the Mississippi River in Minneapolis north of Saint Anthony Falls. Long an industrial area the offered little of the riverfront green space enjoyed by those south of downtown, north and northeast Minneapoliss riverfronts are experiencing changes that present opportunities for increasing public access and green space.

Paddling from Coon Rapids Dam to Fort Snelling offers some breathtaking scenery for an urban river, with one exception  The stretch of river from the Camden Bridge south to Plymouth Avenue is dominated by industrial land uses that present a stark contrast to the natural landscapes both upstream and down. For more than a decade, the citizens of north and northeast Minneapolis have been planning and working towards reclaiming the riverfront. The goal: to create continuous parks and trails along the river that can be easily accessed by the community for recreation and enjoyment.

The Above the Falls plan and Citizen Advisory Committee

During the late 1990s, FMR was part of a planning task force that put together Minneapolis Above the Falls, an award winning plan and vision for redevelopment of the river in north and northeast Minneapolis. In addition to clarifying the communitys goal of continuous greenspace along the corridor, the plan also calls for new residential neighborhoods and commercial uses that will connect people to the Mississippi River. The plan was formally adopted by the City of Minneapolis and the Minneapolis Park and Recreation Board in 2000.

To facilitate and guide implementation of the plan, the City put together the Above the Falls Citizen Advisory Committee (AFCAC), a 30-member board made up of neighborhood, business and environmental representatives selected by the community. The group is charged with advocating for the Above the Falls (ATF) plans implementation and advising decision makers about new development proposals within the plan boundaries. Because of the diverse board and consensus decision making process, AFCAC provides a strong voice for the upper river that is sought and respected by many key decision makers at City Hall.

FMR staff has participated as an environmental representative on the AFCAC for nine years, serving in a leadership role as a member of the groups facilitation committee. In this role, FMR tracked proposals and ensured that AFCACs agenda included review of projects that had an impact on the river. We also helped coordinate the environmental caucus, AFCAC membership development and strategic workplanning.

FMR staff have also been involved in work outside the committee that further enhances the goals of the ATF Plan. In 2004, FMR worked in partnership with American Rivers and the City of Minneapolis to conduct the Upper Harbor Terminal Redevelopment Study [6.5 MB PDF], which looked at the feasibility of creating parks, trails and a new residential neighborhood on 48 acres of city-owned land at Dowling and the river.

In 2005, Irene Jones, FMRs outreach director, was appointed by Mayor Rybak to serve on a task force to plan park development for the west side of the river between Plymouth and the Burlington-Northern Bridge. Irene gave input during the task force process and supported the final plan, which includes converting a portion of the roadway to rain gardens, incorporation of other stormwater treatment best management practices, restoring the shoreline, and creating a natural park environment with focused points of access to trails and the river. You can find out more about this park at the Minneapolis Park & Recreation Boards web page.

In 2006, the City stepped up its efforts to explore options for a Riverfront Organization that could coordinate funding and development activities among the numerous parties. Irene was recently appointed by the lower gorge neighborhoods to the Riverfront Blue Ribbon Task Force that will recommend a preferred approach in spring of 2007. Once a new organization can be established, FMR and the community hopes redevelopment above the falls will be able to move forward more quickly and efficiently.