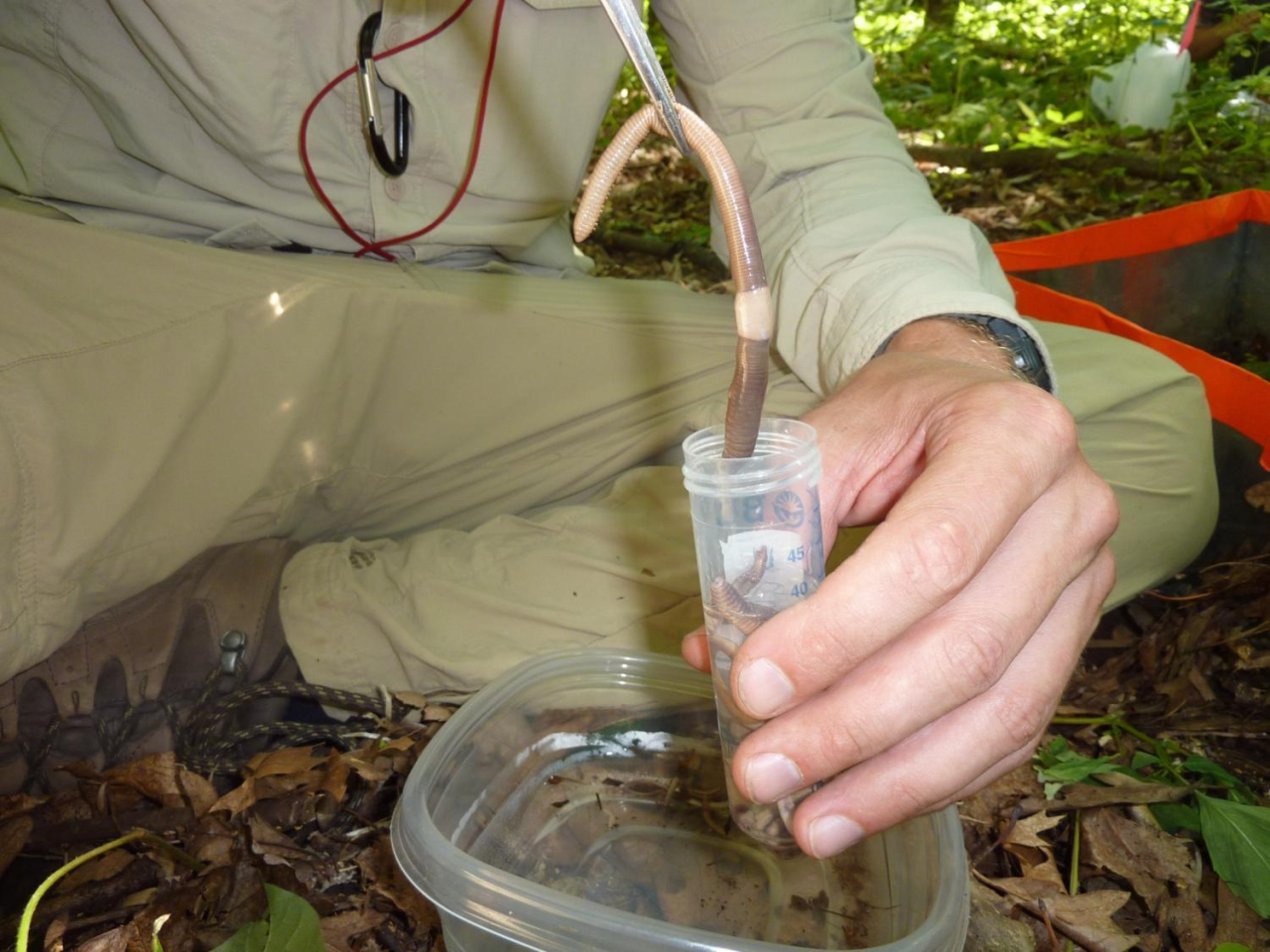 For many people, a walk in the woods affords many great sights — stately old trees, flowering shrubs, and the occasional blur of color as a bird whizzes past. But fewer people keep an eye on the forest floor, save maybe to avoid tripping on an exposed root. The forest floor, however, is constantly abuzz with activity, though that’s not always clear to the untrained eye.

In Minnesota’s forests, earthworms are one of the most abundant and active residents. However, the earthworm, a small but powerful ecosystem engineer, is not actually native to Minnesota.

This comes as a surprise to many people, but because of historical glaciation, there are no native earthworms in Minnesota and much of the upper Midwest. While native earthworms exist in other parts of the country, the earthworms in Minnesota are all European species, brought over with European settlers in the 1800s. (Asian worm species are now invading our region as well.) Some have invaded Minnesota’s forests, most notably species in the Lumbricus genus, such as nightcrawlers and the red wriggler/red worm. A healthy forest not yet invaded by earthworms. Notice the abundant understory plant species and trees of all ages and size classes. Photo: Paul Ojanen

From lush to bare

Our forests evolved to have thick leaf litter and duff layers – "duff" is a term for the partially decomposed material that lies just above the mineral soil. If you’ve ever noticed a forest floor that feels spongy and soft under your feet, there was probably a thick leaf litter and duff layer. Our native forest vegetation evolved to germinate and grow in this thick, moist, nutrient-rich ground layer.

Unfortunately, earthworms speed up the decomposition process, leading to rapid losses of litter and duff. What’s left is bare mineral soil. This causes problems for many of our native plant species, and research has shown declines in native wildflower populations and tree regeneration post-earthworm invasion. The fewer remaining plants are also under more browse pressure from abundant white-tailed deer, causing further declines.

On top of this, many invasive plant species prefer bare soil for germination. Buckthorn and other invasive plants then compete for space with the few remaining native plants. All of this causes a “forest decline syndrome,” where the overall productivity of forests can decline precipitously and the composition of forests as we know them will change. A forest invaded by earthworms. Notice the lack of native vegetation and the patches of bare soil. Photo: Paul Ojanen

But the negative effects don’t stop with plants; earthworms negatively affect wildlife populations as well. Besides the cascading negative effects on species that depend on native plants, earthworms directly affect species that depend on the forest floor. Studies have shown declines in populations of ovenbirds and salamanders as earthworms invade. For these species, earthworms are essentially creating a threat akin to habitat loss. Other litter-dwelling species, including insects, are likely affected as well, though so far studies have focused more on plants and larger wildlife species.

Looking down, we can see evidence of these earthworm species. The nightcrawler (Lumbricus terrestris) is a species that lives in deep, vertical burrows. At night, these worms come out of their burrows to feed, pulling leaves back to their burrows where they eat the palatable tissues and leave the less palatable mid-veins and petioles. Early in the year, this foraging creates small lumps or piles in the leaf litter layer. As the year goes on, the litter begins to disappear as the worms feed, with the most palatable species (like maple and basswood) going first, and the least palatable ones (like oaks) sticking around into the summer months.

The small mounds of leaves become more obvious as the remaining leaf litter thins out, and you may be able to see piles of petioles sticking out of the burrows. By the fall, most of the leaf litter is gone, with abundant bare soil and piles of petioles present. Castings, or small balls of soil that have passed through the earthworm’s digestive system, should also be present in and around each burrow. Earthworm middens are visible here as piles of petioles and partially consumed leaves. Oak leaves are the last species to be consumed by earthworms each year.

Late summer/early fall, before the new crop of leaves begin to fall, is a great time to look for signs of earthworms. Apart from middens, you may also see exposed roots on older trees, where earthworms have eaten away the litter and duff that the roots once grew in. So next time you’re in a forest, take a look down to see the work of arguably one of the most important invaders in Minnesota.