Crown Hydro is back, but can it stand up to a new and exciting civic proposal? | Friends of the Mississippi River
Skip to main content

Crown Hydro is back, but can it stand up to a new and exciting civic proposal? 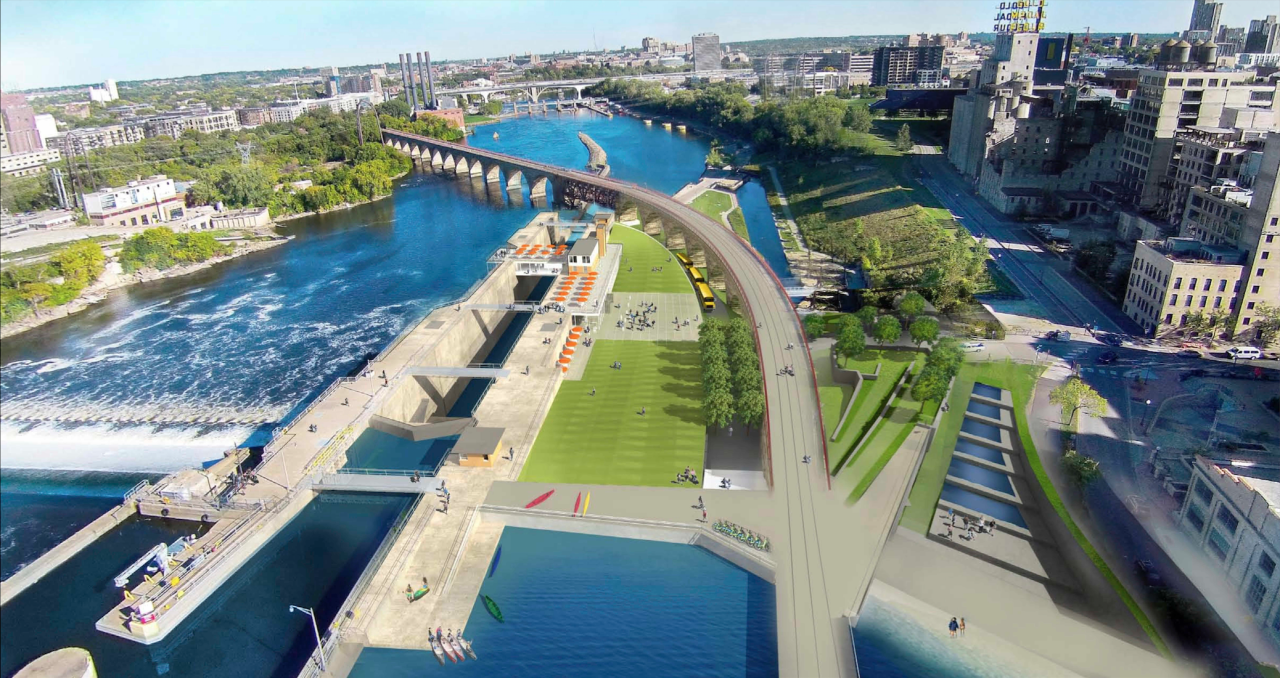 A new proposal for the downtown Minneapolis riverfront, the Falls Park and Visitor Center (above) seems to be gathering momentum. However, a 20-plus-years-old effort to build a hydroelectric power plant in this area has re-emerged. Image courtesy of VJAA.

Crown Hydro is continuing their decades-old effort to locate a hydroelectric facility at Upper St. Anthony Falls on the west bank of the Mississippi River in downtown Minneapolis. In spite of major objections from the city, the park board, the State Historic Preservation Office and the National Park Service, the company’s most recent attempt to secure a necessary license amendment from the Federal Energy Regulatory Commission is making progress.

In early September, the regulatory commission released a draft environmental assessment finding "no significant environmental effect." After several organizations, including FMR, complained about not having sufficient time to review and comment on this unexpected and highly technical proposal, the public comment period was extended by 30 days through November 2, 2016.

Many local stakeholders and organizations are disappointed in the Federal Energy Regulatory Commission's finding. “Hundreds of people and groups have expressed concerns about the Crown Project for years,” lamented local activist and organizer Lisa Hondros, “and yet FERC seems poised to grant a license to a project that has almost zero public support.”

If at first you don't succeed...

Crown Hydro began the process of attempting to locate a hydroelectric facility in the area in the early 90s. In 1994, they planned to locate it in the basement of the Crown Roller Mill building. They gained their FERC license in 1999 (the same license they are now seeking to amend) but failed to acquire the needed property.

For several years after that, Crown made numerous attempts to gain access to park board-owned land at Mill Ruins Park. When they couldn't get the Minneapolis Park and Recreation Board to cooperate, they asked FERC to help them take it through eminent domain. That effort failed. Now, they've set their sites on Army Corps of Engineers-owned land at the Upper St. Anthony Falls Lock. The lock was closed to navigation in 2015, due in part to FMR and our allies' efforts to stop the spread of invasive carp upstream.

In the meantime, the area around the lock and dam and Stone Arch Bridge has grown into a thriving neighborhood, park and entertainment district. As a result, the project has drawn more and more criticism from community organizations as well as all levels of government. Detractors frequently express that a hydroelectric plant is not the best use of such a significant location.

The project is inconsistent with existing plans for the area, such as the city's Mississippi River Critical Area Plan and the Central Riverfront Regional Park Master Plan. Several community members are also concerned that Crown would draw so much water from the river that it could significantly reduce or even dry up the spillway at St. Anthony Falls.

The Army Corps has not granted Crown use of their land. Currently, the agency is preparing to conduct a Federal Disposition Study of the Upper St. Anthony Falls Lock, which could take up to three years.

A newly formed group, Friends of the Lock and Dam, is proposing a bold alternative for reuse of the lock as an interpretive center, meeting space, public overlook and new portage connection, called “The Falls.” Although this proposal was only recently made public, it has been well received by many local stakeholders as well as public officials who have expressed their initial support.

“As the birthplace of Minneapolis, this place holds great significance for our region, state and nation,” said John Anfinson, Superintendent for the Mississippi National River and Recreation Area unit of the National Park Service. “Now that the lock is closed, it is imperative that we carefully consider a variety of options for how it can best serve the public in the future.”