Concert venue, riverwalks — What should become of this retired Mpls port? | Friends of the Mississippi River
Skip to main content

Concert venue, riverwalks — What should become of this retired Mpls port? 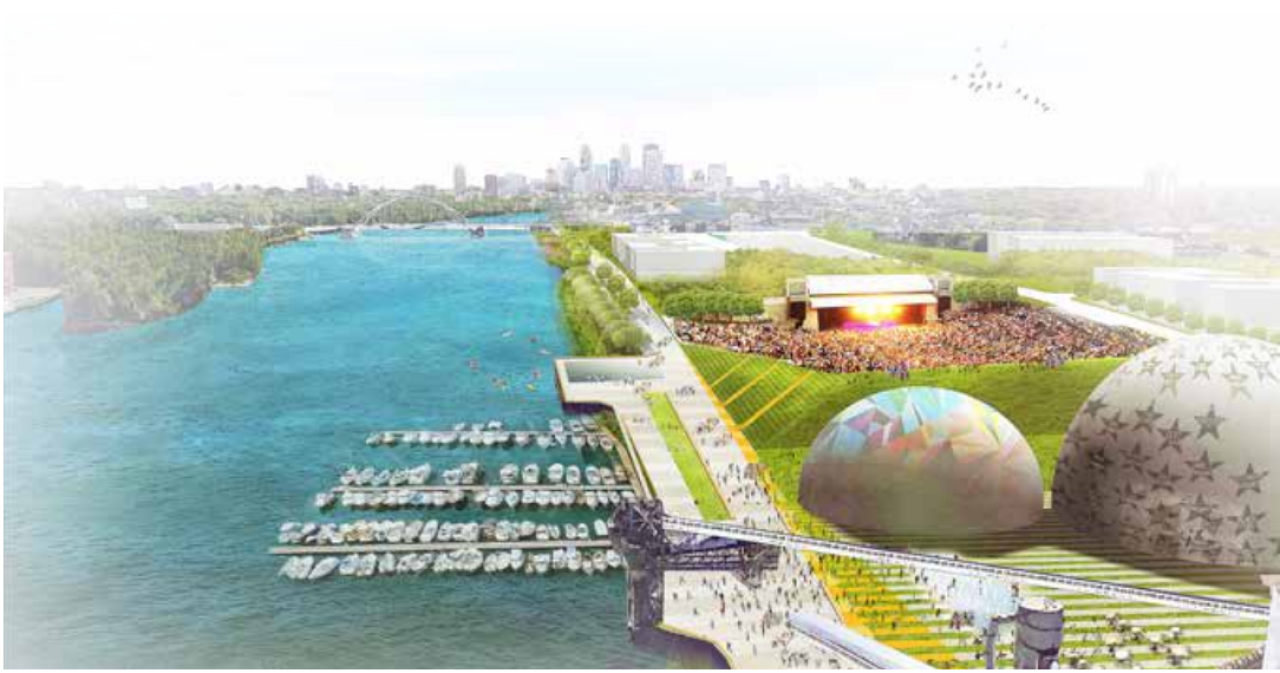 Minneapolis' former port, the Upper Harbor Terminal site, could be home to a new riverfront concert venue. What would you like to see? Take the survey and join the discussion. (Rendering courtesy of upperharbormpls.com.)

Big changes are coming to the Mississippi in North Minneapolis. Making the headlines these days:  a 48-acre city-owned riverfront site up for redevelopment. Are a large amphitheater and riverwalk on the way? What would you like to see?

For years, the Upper Harbor Terminal, located roughly where Dowling Avenue meets the river in North Minneapolis, was the northern-most barge terminal on the Mississippi River. Owned by the city, the struggling port closed at the end of the 2014 shipping season for economic reasons. When the lock downstream at Upper St. Anthony Falls closed in summer 2015, meaning barge traffic could no longer reach the port, the shuttering became permanent. Today the city is renting warehouses and other facilities at the site on year-to-year leases while making longer-term plans for the expansive riverfront site.

The city plans to split the site into two main sections. Riverfront land will become parkland, owned by the Minneapolis Park and Recreation Board, with trails and a parkway. Land further inland will be sold to a developer.

Now the city and park board are working together to figure out where to draw the boundary between the parks and development areas as well as what should be located on the site. The agencies are recruiting a developer to join the decision team. After a fall request for applicants, they have one: a team comprised of United Properties, Thor Construction and First Avenue Productions.

In early November, the city and park board hosted a public open house where nearly 100 people came to meet the development team and weigh in on their proposal. Their suggested redevelopment features a 10,000-person amphitheater and performing arts center, a riverwalk along the entire site, a business incubator to nurture local entrepreneurs, and a mixture of housing, retail, restaurants, industrial and office space. Alongside the Above the Falls Citizen Advisory Committee, FMR staff attended the meeting and would describe the vibe as cautiously optimistic.

If the United-Thor-First Avenue team is selected, they'll work with the city, park board and public to develop a planning process for the site that will begin in spring 2017. If not, the city and park board will determine how to move forward at that time.

This decision is now in the city's and park board's hands, but there's still time to share your thoughts!

What do you think?

A description of the development team and their proposal is available here. Check it out and share your thoughts with the city and park board via this quick, two-question survey. And if you'd like to receive notices of future FMR actions about this project or opportunities to weigh in, sign up to become an FMR River Protector. (Be sure to check the box that reads "Send me action alerts on city and local issues.") FMR began working for the North and North Minneapolis riverfront in the late-90s, helping to create the Above the Falls Master Plan calling for more trails and parks along this primarily industrial stretch of the river. The master plan was finalized in 2000, and we again worked with the city and park board to update it between 2010 and 2013. Over the years, we've weighed in on multiple projects, seeking to honor neighborhood input and raise the profile of the river, whether fighting for riverfront trails or installing pollinator prairies along new riverfront trails. Throughout, we've worked closely with the Above the Falls Community Advisory Committee — a group of North and Northeast neighborhood, business and environmental group representatives — and continue to do so today.

The Upper Harbor Terminal has long been a site of particular interest as its redevelopment will shape a large portion of the North Minneapolis riverfront. In 2004 FMR partnered with the city to develop the Upper Harbor Terminal Redevelopment Study, which helped to create momentum for a public-spirited vision for the site, and has been an active participant ever since working to advocate for our redevelopment principles for the site.

Over the past year, FMR has also been working to ensure that community members will be able to access this new riverfront park once work is completed. Today, Northsiders must cross over Interstate 94 — on bridges that are neither pedestrian- or cyclist-friendly — and then pass through an industrial zone to access the terminal site and other parts of the riverfront. It's very important to FMR that Northsiders have a voice in redevelopment and are also able to reach new riverfront amenities.

FMR plans to kick off an advocacy campaign for improved North Minneapolis river connections in 2017. If you'd like to be involved, contact FMR River Advocate Alicia Uzarek at auzarek@fmr.org.

Upper Harbor plans in the news