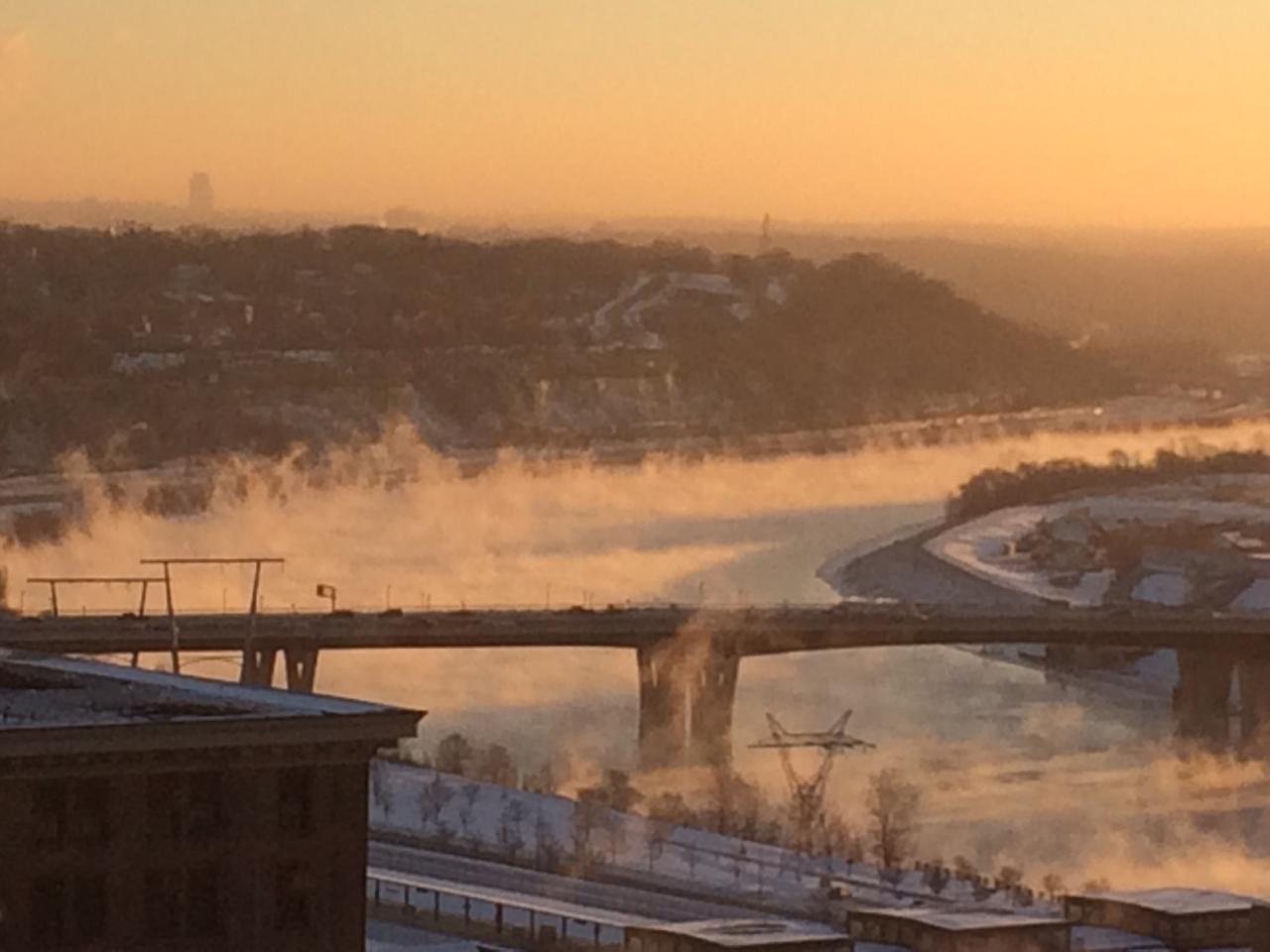 Mist rises from the Mississippi just east of downtown St. Paul on a cold December dawn.

One of the best feature of our new office, perched high on the 20th floor in downtown St. Paul, is that that we can actually see the Mighty Mississippi River. Often, we marvel at its changes throughout the seasons, and throughout the day. But one particular phenomenon had us stumped.

It all started just before dawn a very cold December morning, with temperatures around zero. I arrived at the office and gazed out at the river. With the long, warm fall we had this year, the river was still completely open. The mist rose from it in great billows. Then it began to glow, illuminated by the golden rays of dawn. It was one of those “ahh!” moments, so I snapped a few photos before settling into work.

Later in the day I gazed out again and realized there was no longer any mist. It was still very cold, in the single digits above zero, so my initial assumption — that the relatively warm water rising to hit the cold air was the cause of the vapors — seemed to be wrong. So why was there mist on the water in the morning, but not later in the day? Was it because the sun warmed the air? But it was still bitterly cold...

A quick check with the office experts yielded no results, so we resorted to the internet. While we were essentially right about the sun warming the air, it turns out it’s not just about temperature. Humidity plays a big role.

The whole process is explained very well on the University of Michigan Saginaw Forest blog. But, basically, it goes like this: at the surface of a body of water, the energy of the sun causes water to evaporate, so the amount of water vapor in the air, or humidity, is higher at the water surface. The warmer the air temperature, the more moisture it can hold. When the air temperature drops, the water condenses and forms vapor. Lakes and rivers store a lot of heat over the summer, so when air temperatures decrease in fall and early winter that energy is released. Increased evaporation results in higher humidity levels near the water's surface. When air temperatures drop at night the humidity rises to 100 percent, at which point the air can hold no more moisture. Because there is still stored energy in the water, evaporation continues and the water molecules almost immediately condense as vapor, or mist, as they rise.

Okay, that explains the morning mist, but why does it go away? Well, even on a cold, cloudy day, the energy of the sun increases the local air temperature enough that it “burns off” the mist. The humidity drops below 100 percent so the air can once again hold the evaporating moisture.

Of course, while it’s fun to understand the physics, it’s not essential for appreciating the simple beauty of this natural phenomenon.