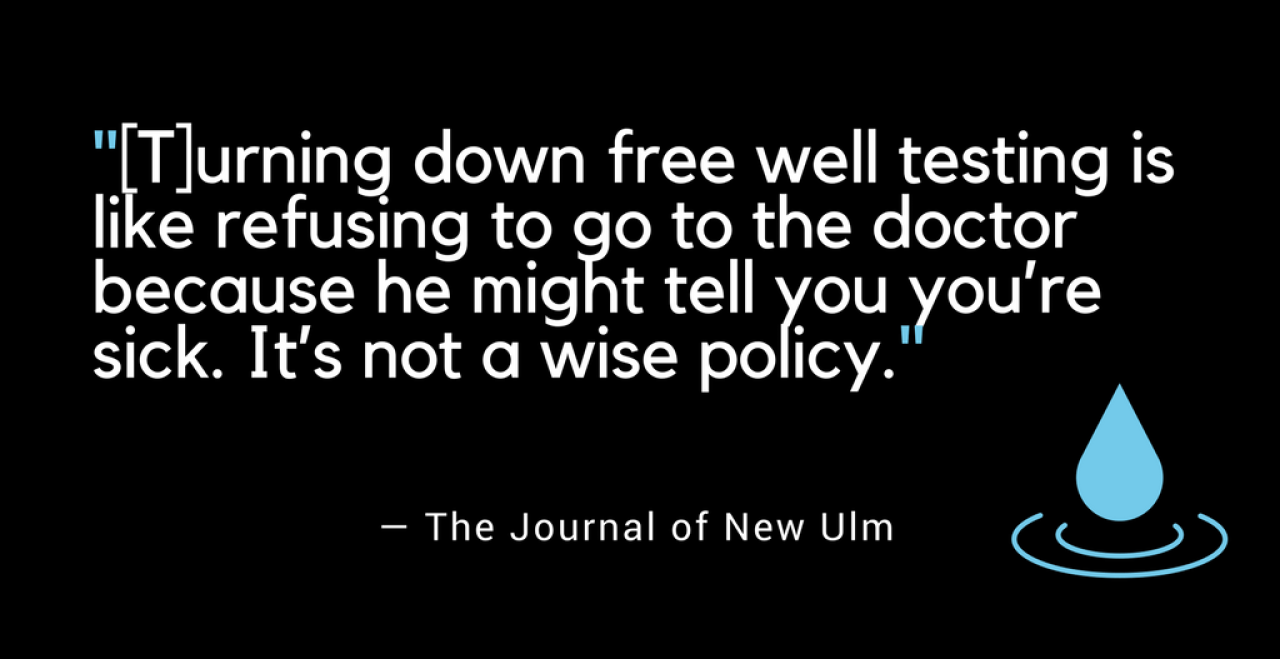 The program would have allowed approximately 336 households in Leavenworth, Mulligan and Stark townships to have their wells tested at no charge and on a voluntary basis. Rather than provide well safety data to private well-owners, the board made the widely panned decision to reject the program for fear that row-crop agriculture could be found partially responsible for contamination.

About 75 percent of Minnesotans get their drinking water from wells, either through a public water supply system or private wells.

The state created the Minnesota Department of Agriculture (MDA) Township Testing Program to help homeowners in areas where sensitive soils and the prevalence of row-crop agriculture make their wells especially vulnerable to nitrate contamination.

Private well owners in target areas are offered a free nitrate test kit. Homeowners simply collect a sample and return it (in a pre-paid mailer) for testing. Wells with high nitrate levels receive follow-up testing, and the homeowner may also be offered complimentary well testing for pesticides as well.

Overall, the program aims to offer free testing to more than 70,000 private well-owners in over 300 townships by 2019. Excluding, apparently, townships in Brown County, which is the only county yet offered the program that has chosen not to participate.

Drinking water with more than 10 parts per million (10 Mg/L) of nitrate can pose risks to infants by reducing oxygen in their blood, a condition known as “blue baby syndrome.” Additional research suggests potential links between nitrate contamination and illnesses in adults, including non-Hodgkin’s lymphoma.

For communities with high nitrates in their drinking water, the health and economic risks are high. So why oppose testing wells?

Agribusiness on the offensive

It appears that County Board opposition to the free well-testing program stemmed from influence by agribusiness groups, who feared that well data would show contamination from cropland sources.

In a letter to the editor, the presidents of the Brown County Corn and Soybean Growers Association and Farm Bureau celebrated the decision, calling the MDA’s free well-testing program “shameful.”

The groups also claimed that high nitrates in wells are not linked to farm field fertilizer or manure use and insisted flatly that "domestic wells are not an indicator of aquifer water quality.” (Evidence for neither claim was referenced.)

They also said the program was unnecessary as most residents already know the quality of water in their private wells. Regrettably, this seems unlikely.

While the state recommends testing private wells for nitrate every other year (and for bacteria annually), survey data suggests most private well data is years out of date. An MDA survey of private well-owners in Olmstead County found that just 29 percent of participants had tested their well at some point in the last 10 years, and only 4.4 percent had done so within the last year.

As The Journal in New Ulm put it: “turning down free well-testing is like refusing to go to the doctor because he might tell you you’re sick. It’s not a wise policy.”

A solution for agriculture and water quality

FMR and a growing roster of conservation and agriculture groups have long held that high nitrate contamination isn’t the fault of farmers themselves, but rather a system of incentives and markets that push farm operations to grow “leaky” annual row crops like corn and soybeans that are inherently prone to pollution.

Despite decades of cost-share programs and admirable conservation efforts, as state research has made clear, we cannot achieve our clean water goals in agricultural areas without a widespread transition to new cropping systems that include perennial crops and cover crops.

With their deeper roots, perennial crops help hold soil in place and filter out pollutants. Perennials, which live for multiple years rather than a single growing season, also provide pollinator and wildlife habitat, build soil health, and clean our air by grabbing or sequestering carbon.

That’s why we’ve partnered with the state, agricultural groups, the University of Minnesota and others to promote sustainable alternatives to current cropping systems through the Working Lands Watershed Restoration Program.

This pro-agricultural approach is designed to help create markets for economically viable perennial and cover crops — crops that we need to achieve our habitat, drinking water and public health goals while diversifying and enhancing our rural economy.

However, such programs (not to mention public health) are doomed if even the offer of free well testing for Minnesotans in contamination-vulnerable areas is considered a threat for fear of critical data. We can do better, and we urge the Brown County Board of Commissioners to reconsider their decision.

To learn more about issues like nitrate pollution and receive action alerts when we need your help the most, join the FMR River Guardians.