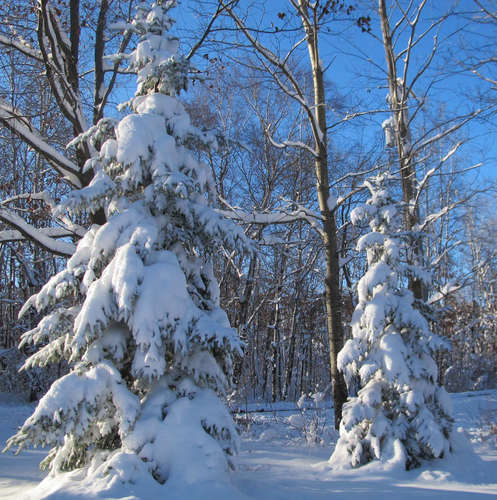 Although "slenderized" by a 17" snowstorm, this Balsam fir is unphased by the load of snow.

The 17 of snow that recently deposited in our woods reminded me of the marvels of conifers. This time of year especially, we love them for their fresh green foliage and wonderful vibrant smells. (For the moment, we can ignore that little paradox of how we love them so much we kill them by the millions every holiday season  cutting them down and putting them in our houses, only to throw them away a few weeks later!) My marveling on this particular day was less about their scent and coloring, and more about their perfect adaptations to their wintery world. Enshrouded in snow, the limbs of one balsam fir were so laden down that the tree was about half its normal diameter. Yet it was in no danger at all of breaking.

In a snowy climate, trees have evolved many adaptations to survive the cold, as we wrote about in a previous phenology on Winter Dormancy. Deciduous trees drop their leaves, presumably in part because the leaves would be a liability in winter conditions. They would hold snow and ice, the weight of which could cause tree branches or whole trees to break. We sometimes see this happen in a late spring snowstorm. Conifers, on the other had, do keep their leaves and accumulate significant quantities of snow, yet have no trouble accomplishing this and are seldom damaged in a snowstorm.

Its the iconic conical form of conifers that makes them perfectly designed for snow. The single main trunk pointing straight up catches a minimal amount of snow, while the whorls of lateral branches simply fold down like an umbrella as they get loaded up. The limbs have enough flexibility to droop until they hit the branch below, with each limb ultimately supported by the one below. Eventually, the slope of the branches becomes steep enough that the snow slides off and the branches bounce back into place. Conifers conical shape also minimizes shading of the lower branches, allowing them to receive sufficient sunlight. There is much more about conifers to engage our wonder, but well leave that for another day.

For more fascinating information on tree ecology, and just a great winter read, see The Trees in My Forest by Bernd Heinrich.