Piece by piece, the beauty of a restored Lilydale Park is being realized | Friends of the Mississippi River
Skip to main content

Piece by piece, the beauty of a restored Lilydale Park is being realized

A new stone monument, similar to the example shown here, will be erected this summer at the eastern entrance of Lilydale Park, just west of Harriet Island.

St. Pauls newly completed Lilydale Park Master Plan identifies over a dozen major projects and improvements for Lilydale Park, and, starting this summer, several of those are going to become a reality. A major cleanup of rubble, new signage, a rerouted Lilydale Road, and new picnic area will all make substantial progress this year. (Click here for a Google map.)

A grant of nearly $1 million from the states Clean Water, Land and Legacy Amendment funds will help the city design and engineer two major park changes. First, Lilydale Road will be rerouted through the heart of the park to travel further away from Pickerel Lake. Second, in the space created by the newly rerouted road, a new picnic area will be constructed along the northern edge of Pickerel Lake, as described in the Lilydale Park Master Plan. 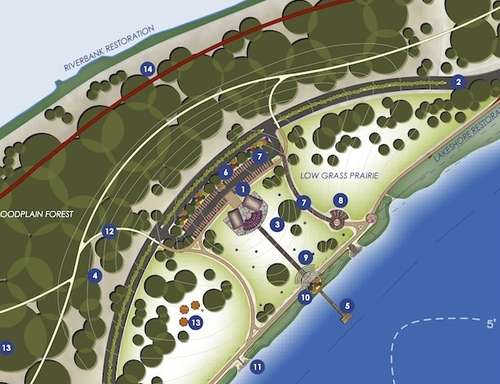 The Lilydale Master Plan contemplates pulling Lilydale Road away from Pickerel Lake (bottom), and further toward the Mississippi River (top). The realigned road will allow for a new picnic area along the lake.

A task force of over a dozen community stakeholders will help make major decisions about these key elements of park design. The task force is co-chaired by volunteer Grit Youngquist, who, along with her husband Jon Kerr, has built Friends of Lilydale Park into a unique champion for the park and its resources. FMR River Planner Bob Spaulding serves as the other co-chair. The task force will begin meeting to discuss design and engineering in July, and hopes to wrap up in early 2011.

While planning takes place for the road and picnic area, other work is moving forward this year. This summer, thanks to about $1.5 million in funding also from the Clean Water, Land and Legacy Amendment funds, the city will begin cleanup in some of the areas of the park most impacted by past abuse. According to City Landscape Architect Alice Messer, concrete and other heavy construction debris will be removed from two areas on the west end of the park between the Mississippi River and Pickerel Lake.

Decades ago, Lilydale Park was a major dumping site. What might be mistaken for riverfront hills are in fact mounds of dirt and rubble, complete with decades-old trees growing out of the top. Over 100,000 cubic yards of debris will be removed, and much of that will be crushed, buried and capped at a variety of locations in a restored park.

Until digging begins, it will not be clear whether any of the debris is hazardous; if it is, additional remediation will take place. To accommodate the cleanup, a portion of the park may be closed this summer.

Finally, and significantly, thanks to a major grant from the newly-formed St. Paul Parks Conservancy, a new stone monument and welcome sign will be constructed to welcome visitors coming to Lilydale from Harriet Island Regional Park to the east. A concept plan for the monument is shown above.