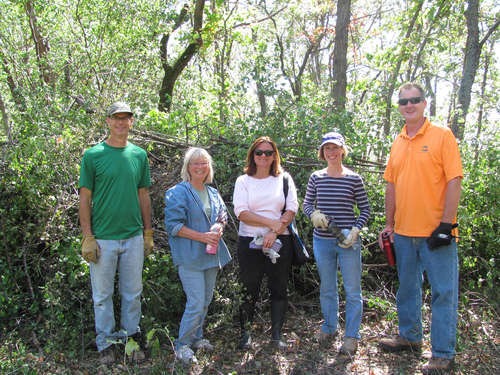 FMR wrote the Natural Resource Management Plan for the Gateway North Open Space Area (GNOSA) in January 2012. Known locally known as Camels Hump, GNOSA is a 54-acre site owned by the City of Cottage Grove and has been designated as public parkland. It has also been permanently protected through a conservation easement held by the Minnesota Land Trust.

Utilizing funding from the Outdoor Heritage Fund, through the Metro Big Rivers Habitat Partnership and with funding provided by the City of Cottage Grove as well as from the 3M Foundation, FMR has begun turning the plan into reality.

This is a beautiful site with great potential. The first part of this process involves the restoration of two acres of Oak Savanna at the top of the bluff. This savanna has become overgrown with brush over the past 150 years, due to fire suppression and the introduction of invasive woody species including buckthorn, Tartarian honeysuckle and Siberian elm. In addition, another four acres of savanna restoration will take place elsewhere at the site; two acres of bedrock bluff prairie restoration, and approximately 19 acres of dry-mesic oak forest restoration. All told, Phase I will start to restore 27 acres, orhalf of the site. Phase I is scheduled to continue for approximately two years, into spring 2014.

The main tasks ahead for Phase I are removal of exotic and overabundant native woody vegetation. At the savanna, although the brush is scattered throughout the entire area, the density of brush varies. Most of the site is fairly open in the canopy tree layer. There are a few scattered trees, bur oaks, basswoods, black cherry, boxelder, hackberry, etc., but shrubs dominate most of the site. Much of the area contains buckthorn and Tartarian honeysuckle at a high density; other areas are not as densely packed with exotics since they contain more native shrubs like smooth sumac, grey dogwood and prickly ash. The size of the brush also varies, from very large, older individuals to small whips. The management plan calls for treating the larger stumps with herbicide to prevent resprouting. If the stumps resprout, this would result in an even denser brush cover than if no cutting had occurred, making stump treatment crucial.

The first two acres of savanna restoration are currently underway. On September 10th, approximately 40 volunteers generously devoted their energies to assist with restoration activities. These cheerful and motivated folks eagerly hauled limbs, stems, and branches previously cut by a field crew, into piles for future burning. The entire operation is being overseen and managed by FMR ecologists.

The transformation was amazing. What initially was a buckthorn infested thicket was transformed into an open landscape. Now this area is ready for the next step: controlling buckthorn seedlings and re-introducing native prairie/savanna species  grasses, sedges, wildflowers and ferns  back into the ecosystem.

Important tools in prairie and savanna restoration are re-introducing fire and seeding of native species. Fire is important because it controls woody seedlings, increases nutrient availability for prairie plants, and keeps the area open. Seeding is also crucial for prairie or savanna restoration. Bluff prairies are uncommon, and this remnant is of a good quality, so it is important to retain local ecotype fidelity. Thus, seed will be collected from existing remnants on site. This collected seed will be used in bare areas and spots that were formerly dominated by exotics.

It is often quite difficult to burn sites that have been occupied by woody invasives for many years, especially if there is no oak component in the canopy layer. Fire needs three factors in order to occur: fuel, oxygen and heat. Without these three parts of the fire triangle, fire will not happen. So, if there are no fine fuels, like grasses and sedges, then fire can be difficult to start and maintain. Oak leaves are a good fuel because they cure well and will burn even when the ground is moist. Many other tree leaves will not burn readily, including buckthorn, maple, and ash. It can be difficult to carry woodland burns, i.e., keep them burning on the ground. This is true especially on sites where fire has been excluded for decades, like this one. The lack of fine fuels on the ground, the abundance of old, decayed woody debris, and the shelter from winds and sun provided by the trees and shrubs are not good conditions for a running ground fire. Eventually, through opening the area up by removing brush, re-establishing grasses conditions will gradually improve, and prescribed burns will be more effective and easier to conduct.

Restoring the oak forest is a different story. Historically, forests did not burn nearly as often as savannas, so fire will not be a key tool in restoring these areas, as it will be in the savannas. Luckily, a majority of the forested areas here already have an intact plant community with a diverse understory and ground layer. Buckthorn is just starting to invade these areas, so controlling it before it becomes solidly established is the goal. Another challenge will be to manage tree diseases. Oak wilt and Dutch Elm disease have opened up large gaps in the forest canopy. Preventing these gaps from being taken over by exotic species, and promoting a diverse understory of native species is the goal.

Restoration is a process. It takes time to restore ecosystems to their former functioning; sometimes this can only be approximated. It took many years to degrade the ecosystem and biological communities of the GNOSA, so it will not be restored overnight. Many steps are typically involved in a successful restoration but using established methodologies and a little common sense, we can successfully restore this landscape to close to its former glory. The goal is to complete the first phase of restoration by the spring 2014.

FMR would like to thank the City of Cottage Grove, the 3M Foundation and the Lessard Sams Outdoor Heritage Council for funding for this project. The transformation of GNOSA promises to be an exciting thing to witness. Hopefully you can come out and see it for yourself! Gateway North Open Space Area is located between 70th and 80th streets and between Hwy 61 and Hardwood Avenue South in Cottage Grove.