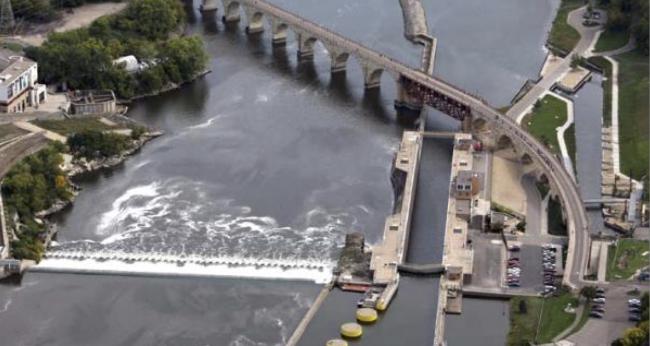 Recently, two public meetings about the U.S. Army Corps of Engineers lock and dam disposition study drew over 100 attendees, mostly local residents and business owners. If you couldn't make it, you can still weigh in by submitting written comments by October 20.

Droves of people had attended the summer 2018 public meetings about a similar previous study. Many expressed concerns that will be better addressed this time around. In the 2019 study, the Corps will look at the potential environmental and economic impact of all-out removal of the two dams, something FMR and many metro river lovers are excited to explore. (See our full position.)

The 2017 study was very narrow in focus. The Corps said it had been authorized to consider just two options: "No Action" (keep everything) or "Disposal" (transfer ownership of everything).

During the public meetings about the study, people clearly wanted additional options and information.

Community members and organizations alike had numerous questions and concerns about the potential impacts, community benefits and expected costs of dam removal and river channel restoration.

Participants also expressed concerns about future usage of the Upper Lock, with many meeting-goers advocating for a more nuanced approach that would enable the City of Minneapolis and partner organizations to move ahead with plans to repurpose the lock as an interpretive center and visitor destination.

Removal to be studied this time

Following those contentious public meetings, several groups, including FMR, Friends of the Lock & Dam and American Rivers, successfully lobbied members of Congress to redirect the scope and timing of the study in America's Water Infrastructure Act, signed into law in October 2018.

At this recent (August 2019) meeting, Corps staff explained the law's impact on the new studies.

For the Upper St. Anthony Falls lock, the Corps will:

For all the local lock and dam disposition studies, the Corps will

Several people at the meeting inquired about restoring St. Anthony Falls to a natural waterfall. The Corps clarified that the Upper St. Anthony study will not include disposition, removal or modification of that dam as it is owned by Xcel Energy, not the federal government.

Corps staff encouraged meeting attendees to submit written comments on the scope of the study by October 20, 2019.

They're looking for input on the development visions put forward, other new ideas for development, and suggestions to maintain/improve the human environment, natural environment and recreational opportunities. For more information about the visions put forward by other organizations, see the online version of the presentation given during the two public meetings last month.

These comments will inform a draft environmental assessment that will be released for public comment in spring 2020. To learn more about how to comment, visit the Corps' Disposition Study website.

The second study will also include a rigorous environmental review of dam removal and other alternatives, including a full environmental impact statement.

FMR's official position on dam removal provides a summary of the many issues and questions that we'll need to evaluate during the next round of studies.

Become a River Guardian and we'll tell you when opportunities arise to advocate on important river issues like this.