Why Minnehaha Academy's new building blends in with the Mississippi Gorge 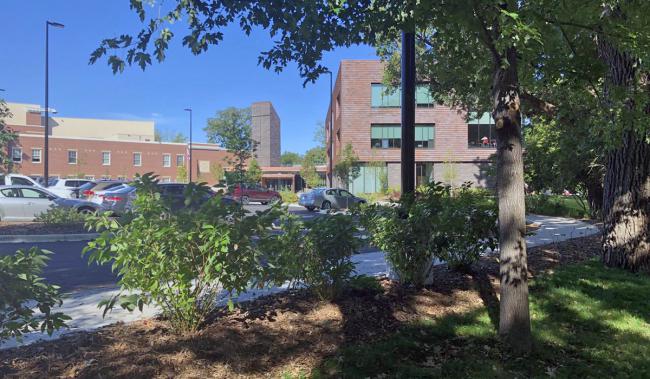 Minnehaha Academy's high school addition (building on the right) in Minneapolis is 8 feet shorter than originally proposed, and it blends in with the Mississippi Gorge thanks to neighbors who weighed in asking for tree preservation, additional landscaping, bird-safe glass and a brick exterior.

It's not often that a heated community debate about development along the Mississippi River Gorge leads to a building that fits well into this picturesque landscape, but the new addition to Minnehaha Academy does just that. It fits in so well that it's actually hard to see the new building from the parkway!

How river development can blend in (and why it should)

The private school has been located along West River Road in Minneapolis for more than 100 years. After a 2017 explosion killed two people and destroyed some of their buildings, the academy proposed additions to replace and expand the high school. The resulting new school is hard to see from the road for several reasons: All of the trees between the parkway and the building were preserved, the building height is well below the height of the surrounding trees, and the exterior of the building is dark brick siding that blends in with the surroundings.

The initial proposal for the school addition was quite different: It was taller, closer to the river and had grey cement siding. If built as originally planned, it could have been detrimental to the scenic character of the Mississippi Gorge Regional Park.

Evolution of the design

When the original building concept showed up in a news article before any of the neighbors had been consulted, it raised alarms in the community and with FMR that the project needed to change.

Thanks to the advocacy of neighbors, FMR River Guardians and the Minneapolis City Council, the features described above were all modified during the planning process. To their credit, Minnehaha Academy agreed to certain changes in advance of city approvals, such as moving the building and parking lots away from the parkway to preserve the trees.

The final approval by the city council required reducing the height of the building from 54 to 46 feet, changing to a darker exterior, utilizing bird-safe glass on all windows and planting additional vegetative screening on nearby parkland.

Although planning for the new building was challenging at times for both the school and the community, the project turned out to be a positive addition for both. Democracy can be messy, but in this instance the process worked. The efforts of FMR River Guardians and neighborhood activists were well worth the time.

Thanks to all of you for bringing your voice to the process.

Become a River Guardian and we'll tell you when opportunities arise to advocate on important river issues like this.

And if you'd like to be invited to volunteer events to restore river gorge habitat, email Sophie at volunteer@fmr.org to join the River Gorge Stewards.