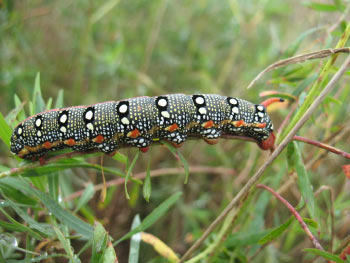 A Leafy spurge hawkmoth chews on the plant for which it's named.

This spectacular caterpillar was found in August on a particularly invasive non-native plant located at the Sand Coulee SNA prairie. Any guesses? OK, I'll give you a hint -- the plant being eaten is leafy spurge (Euphorbia esula).

The critter, of course, is the leafy spurge hawkmoth (Hyles euphorbiae), introduced in 1965 as the first bio-control agent for leafy spurge.

A primary reason why some non-native plant species become invasive when relocated to another continent or region is because the predators and disease that normally attack them are not found in the new location. Biologists do extensive research to determine which agents from the homeland are most effective at controlling the plant AND have the least impact on native species. Often times several good agents identified and are combined for maximum impact.

In the case of leafy spurge, while the hawkmoth larvae readily eat the foliage of the plant, they do not cause enough damage to reduce the aggressive advance of the plants. Other insects were eventually determined to be much more effective control agents. Of the ten Eurasian insect species that have been released, two types of beetles are typically considered the most effective.

The adult moth, pictured here, is a large-bodied moth that resembles a hummingbird in flight

We're hiring!
State announces new pilot program to include climate change in environmental review
From Ramsey to Ravenna, updated riverfront protections come to life
FMR's fifth water quality mural celebrates community connections to water
Our Healing River: A moving evening of stories and connection
How to support our downstream neighbors after the hurricane