A settlement reached on the White Bear Lake lawsuit 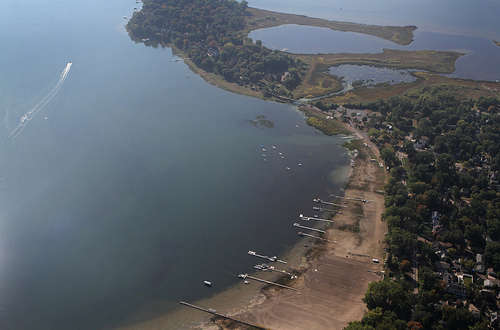 Excessive groundwater use has contributed to groundwater depletion of lower water levels in White Bear Lake in the northeast metro.

The plaintiffs asked the court to force the DNR to act on three fronts:

Earlier this month, the Minnesota Department of Natural Resources (DNR) and local plaintiffs reached a mediated settlement on the White Bear Lake lawsuit. The settlement doesn't necessarily resolve the dispute, but rather freezes the litigation for up to three years while the state acts to address the plaintiff's concerns.

Specifically, the DNR agreed to the following actions as a result of this settlement:

Thankfully, the settlement does not include any commitment to implement an augmentation scheme supported by some local residents and Chambers of Commerce. Augmentation would involve pumping water directly from the Mississippi River into White Bear Lake in an attempt to artificially raise lake water levels. FMR has strongly objected to the augmentation approach, noting that its staggering expense ($55-60 million plus operations & maintenance), uncertain effectiveness, and distraction from the real issue of unsustainable groundwater use made it an unwise course of action.

Through this settlement, the DNR agreed to support a legislative proposal to advance public funding for phase I feasibility and design. However, the DNR cannot force the legislature to act.

Furthermore, the settlement does not identify an appropriate source of funding for eventual development of a new water supply system. With an overall price tag in line with the new Minnesota Vikings Stadium, developing both phases of a northeast metro water supply system will pose tough questions for the region and our state.

Over the coming years, FMR looks forward to working with our members and decision makers to secure sustainable, fair, and equitable funding to manage our long-term water supply needs.

Is the Mississippi River at risk?

It's natural for river lovers to be concerned about the potential risks to the Mississippi River posed by increased surface water withdrawals. The river is a world-class natural, cultural, recreation and economic resource that must not be harmed by a transition to surface water use.

In an average year, the metro Mississippi River carries about 4.7 trillion gallons of water through the metro area. Currently, public water supply systems draw off about 2% of river flow, much of which is returned to the river through our wastewater treatment systems.

After consulting with experts from the Metropolitan Council and others, FMR is confident that transitioning northeast metro area communities to surface water for their primary water supplies is sustainable. Provided that these communities retain their existing well systems to draw from in emergency situations or when Mississippi River flows fall below safe levels in the driest years, the approach agreed to in the settlement agreement will not put the metro Mississippi River at risk.

FMR will continue closely monitor progress toward both phases of the northeast metro water supply system, and work with local residents and water supply planners to make sure that the Mississippi River is protected for generations to come.