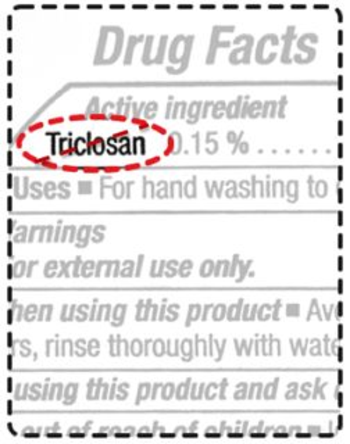 Triclosan will soon begin to be removed from soap and body wash products in Minnesota.
Photo: Wikimedia Commons

In a major victory for environmental quality and public health, the Minnesota Legislature voted in favor of a bill that makes Minnesota the first state in the nation to prohibit the sale of cleaning products containing triclosan that are used by consumers for hand and body cleansing, effective January 1, 2017.

This was FMRs primary legislative priority this session, and a tremendous step forward for the Mississippi River.

Triclosan is a common additive in many antibacterial soaps and personal care items like toothpaste, deodorant, fabric, kitchenware and cosmetics. Human exposure to this harmful chemical is becoming more common and about 75 percent of Americans test positive for triclosan in their urine. Triclosan has been linked to increased allergy susceptibility, and may pose risks to healthy human and animal reproduction, hormone development, and muscle function.

According to the U.S. Food & Drug Administration, there is no evidence that triclosan provides any health benefit to consumers. As a result of these risks and the superiority of alternative products already on the market, FMR reached out to a number of partners to advance legislation to phase out the sale of triclosan in select consumer products.

A rocky road: How it passed

The triclosan phase-out legislation followed a rocky road through this year's legislative session. A bill was introduced by Representative Diane Loeffler (DFL - 60A) to phase out the sale of triclosan-based soaps and body cleaning products effective January 1, 2016. This bill (HF 2772) received bipartisan support at the capitol and was supported by the Minnesota Medical Association, the University of Minnesota Center for Infectious Disease Research & Policy, and many in the environmental and public health communities.

After passage in the Health and Human Services Committee, the bill stalled due to opposition in the House Environmental & Natural Resources Policy committee by chair Rep. David Dill (DFL - 3A). Representative Loeffler attempted to amend the triclosan language to the Health Omnibus Policy Bill, but legislators blocked that move on May 5, responding to concerns from Minnesota's own Ecolab.

Following that defeat, FMR worked with Ecolab, the soap industry, public health experts, and state legislators to negotiate compromise language to narrow the scope to just consumer cleaning products used for hand and body cleansing, with an effective date of January 1, 2017. While FMR hoped for a 2015-2016 effective date, we were able to secure some industry support through this compromise language.

The revised triclosan bill was proposed as an amendment for SF 2192 and considered on the floor of the MN House of Representatives on Thursday, May 8. The amendment was adopted by a 101-29 vote.

The House and Senate Conference Committee met on May 12 to work out differences in the House and Senate versions of the SF 2192. During this committee, the members voted unanimously to include the triclosan language in the final conference report. The final language was then sent to the floor of both chambers for final passage.

FMR wishes to thank all of our partners and friends who made this victory possible. More than 900 Minnesotans signed our petition in favor of this bill, and nearly 400 people personally contacted their legislators asking them to support this initiative.