My reflections on the Upper Harbor Terminal community learning table 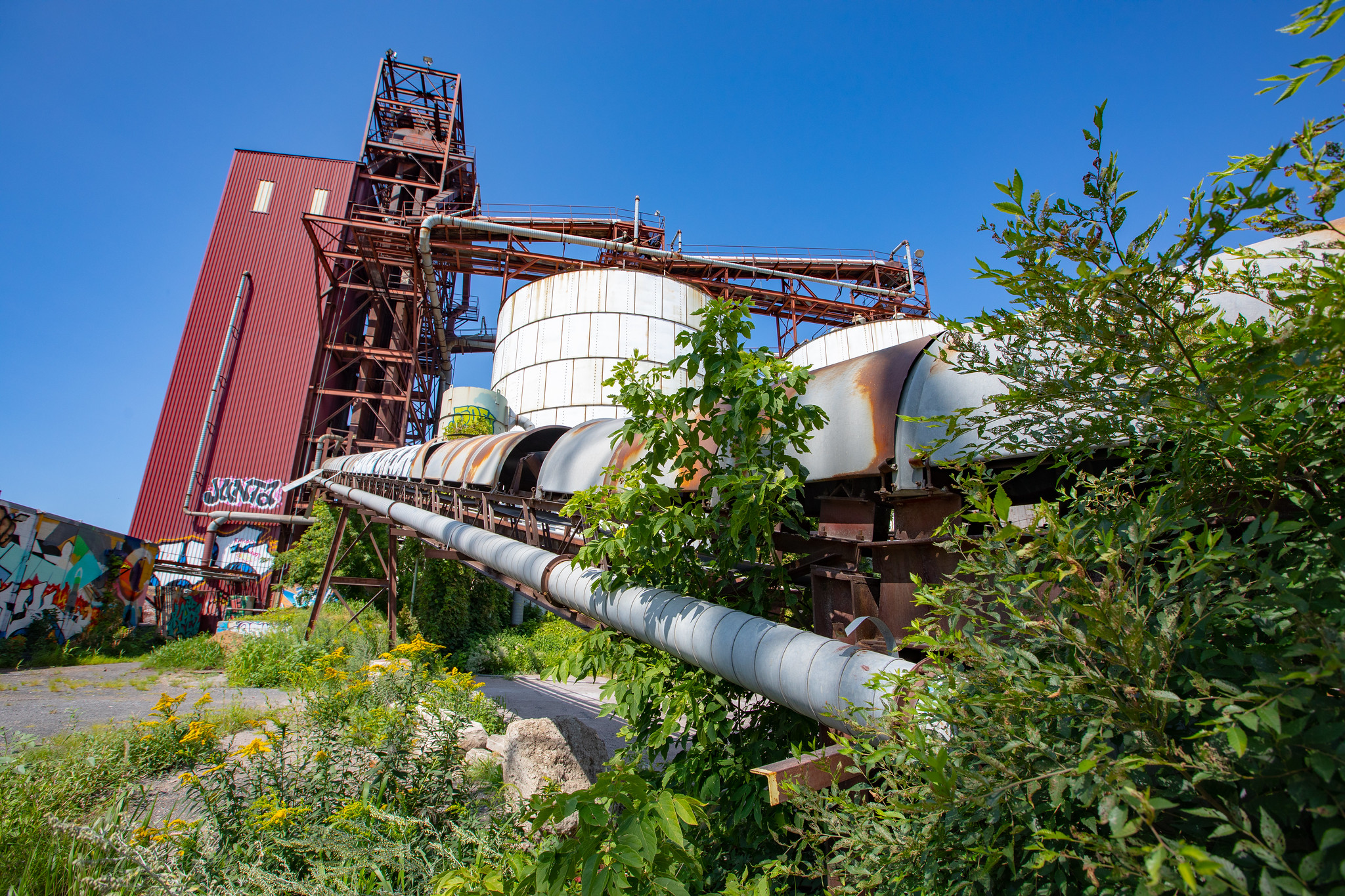 On July 18, I attended the first community learning table for Upper Harbor Terminal (UHT), hosted by the Environmental Justice Coordinating Council and Pillsbury United Communities. This was a four-hour event open to anyone interested in learning more about how development processes work and sharing their ideas about the future of UHT.

It was the first in a series of monthly events, each of which will focus on a different aspect of the UHT development concept plan. This session was focused on affordable housing. It included a presentation from the development team, a panel of speakers sharing ideas about anti-displacement strategies, and full-group discussion.

Who was there? Who wasn't?

I counted 35-40 community members in attendance, about half to two-thirds introduced themselves as Northside residents. Eight appointed members of the UHT Collaborative Planning Committee attended, as did several members of the United Properties/First Avenue development team and a few staff from the city of Minneapolis' Department of Community Planning and Economic Development.

Notably, I didn't see a single current elected official in the room. I'm not aware of any of their staff being in attendance, either. This is a real loss, as there was a lot of talk at the meeting about holding our elected leaders accountable for the future of this project. It's important for representatives to hear and respond to the many concerns raised by their constituents and I hope they are present at upcoming sessions.

What was discussed? Gentrification and displacement concerns.

I was riveted by the discussion from beginning to end. Participants asked many thoughtful questions and shared dozens of ideas for a better development plan. Throughout, I heard only critical feedback from community members about the city's concept plan, critiques FMR largely shares (read more about our concerns with the concept plan here). I didn't hear anyone voice support for the concept plan. A consistent theme was, "We know what we need, and we're not sure this meets those needs."

Concerns about gentrification and displacement were repeatedly voiced. Attendees noted that some housing that technically meets "affordable" standards is still too expensive for those with the lowest incomes, including a lot of north Minneapolis residents.

The racial and geographic disparities in wealth, income and homeownership that affect north Minneapolis residents, especially African-Americans, are well-documented. Even for residents who already own their homes, rising property values often result in higher property taxes that can extend beyond one's means. I heard a lot of desire from event attendees for truly affordable home and property ownership, whether as individuals or as a community cooperative.

This map from the city (which I dug up after the meeting) on increased community values only underscores their point: Another big topic: Who benefits?

Attendees were also interested in strategies to ensure that people with deep Northside ties are the first to benefit from new Northside housing opportunities. Andrea Brennan, the city's director of housing policy and development, said that the city is exploring models for this. The city staff and development team also committed to including anti-displacement, community ownership, and racial equity strategies in the forthcoming UHT coordinated plan. Participants provided several great suggestions for the team to explore.

Another theme I heard was the importance of recognizing the Northside's assets. One attendee shared that many present north Minneapolis residents, as well as Native American tribes and other past area residents, have invested many forms of capital in the area. This includes financial as well as human and social capital. Many people hold an investment stake in this site. Another attendee noted that African-Americans contribute a lot of economic activity and tax revenue in Minnesota and that those contributions should flow back to the community when taxpayer funds are spent.

Attendees also shared concerns about the plan's relationship to and respect for the Mississippi River. Some stated that they didn't believe that the development team and the concept plan fully recognize and celebrate the river as a community asset. One attendee noted that riverfront parks and trails are a key reason behind Minneapolis' reputation as a great place to live and visit. (On a visit to UHT earlier this week, I saw a bald eagle, an osprey and several great blue herons in under an hour—a reminder that even this blighted industrial site is already part of our river environment.) The October 16 learning table will include more discussion about parks and trails.

Some participants asked questions about how the development team will profit from this city-owned site. One asked, "Why would the city sell north Minneapolis land to billionaires?" referring to the fact that United Properties is owned by the Pohlad family, named as the second-wealthiest family in the state. He encouraged the development team to use Pohlad Family Foundation funds to support community ownership models at UHT.

Another attendee asked the development team, "How much money are you going to make off of this project?" She requested that the business projections be shared with community stakeholders. I hope the development team will follow through on this as part of their stated commitment to be transparent about their efforts to prevent gentrification.

According to Brandon Champeau from United Properties, the development team is very open to incorporating the community's ideas into their plan to "put all of the control, all of the return, everything into the community's hands."

United is looking into community investment trust models that would allow community members to own the housing rather than United or another developer. Brandon stated that United does expect to make a profit from the UHT development but that it might be lower than the 10-20% profit they typically earn from other projects.

Concerns and hopes for future events

Several more learning tables and "deliberative democracy sessions" are planned between now and the end of the year. While I appreciate the deep dives and co-learning that these events allow, they are four and eight hours long. That's a big time commitment, and while it's great for some people it will not work for all community members. The event hosts have promised that there will be additional engagement through other types of large-scale community events, online tools and other methods.

I hope these begin very soon. The city has allowed only about seven months for this entire engagement process, which is both why these learning table events must fit in so much at each session and why it's urgent that additional forms of engagement begin immediately.

We definitely need to have elected leaders, particularly from the city council and the state legislature, at these meetings. This project depends on city-owned land and city and state funds to support private development. Elected leaders need to hear the concerns and ideas that their constituents are sharing. And these meetings are not recorded on video, so there's no true way for a leader to catch up on the conversations that they didn't attend.

I also hope to see the engagement team make their events more welcoming to more community members. Food was provided, but childcare, interpreters, transportation and stipends were not — despite community members volunteering four hours to share their expertise with the development team. Community engagement best practices routinely call for such services to be provided as a way of reducing barriers to participation and reaching a more representative community base.

This event was also only announced a week in advance. Imagine the turnout there could have been with more notice to a wider range of Northside residents and stakeholders! I'm glad the community has more notice for the next session, August 21 (see below).

Ultimately, none of these events make a difference unless our elected leaders and development team respond to what's being said by making significant changes to the concept plan. I hope that these events create accountability, highlight community-driven ideas and lead to a better vision for Upper Harbor Terminal.

If you're interested in keeping in touch about Upper Harbor Terminal, please contact me, Colleen O'Connor Toberman, at ctoberman@fmr.org or 651-222-2193 x29. Minneapolis residents can also use our easy webform to e-mail your city councilmember and Mayor Frey with your concerns about this important north Minneapolis riverfront redevelopment.

To receive updates from the city about future engagement events and project updates, sign up for e-mails at UpperHarborMpls.com. The next community learning table will be August 21 from 4-8 p.m. A location has not yet been announced. This session will be focused on the proposed First Avenue concert stadium.