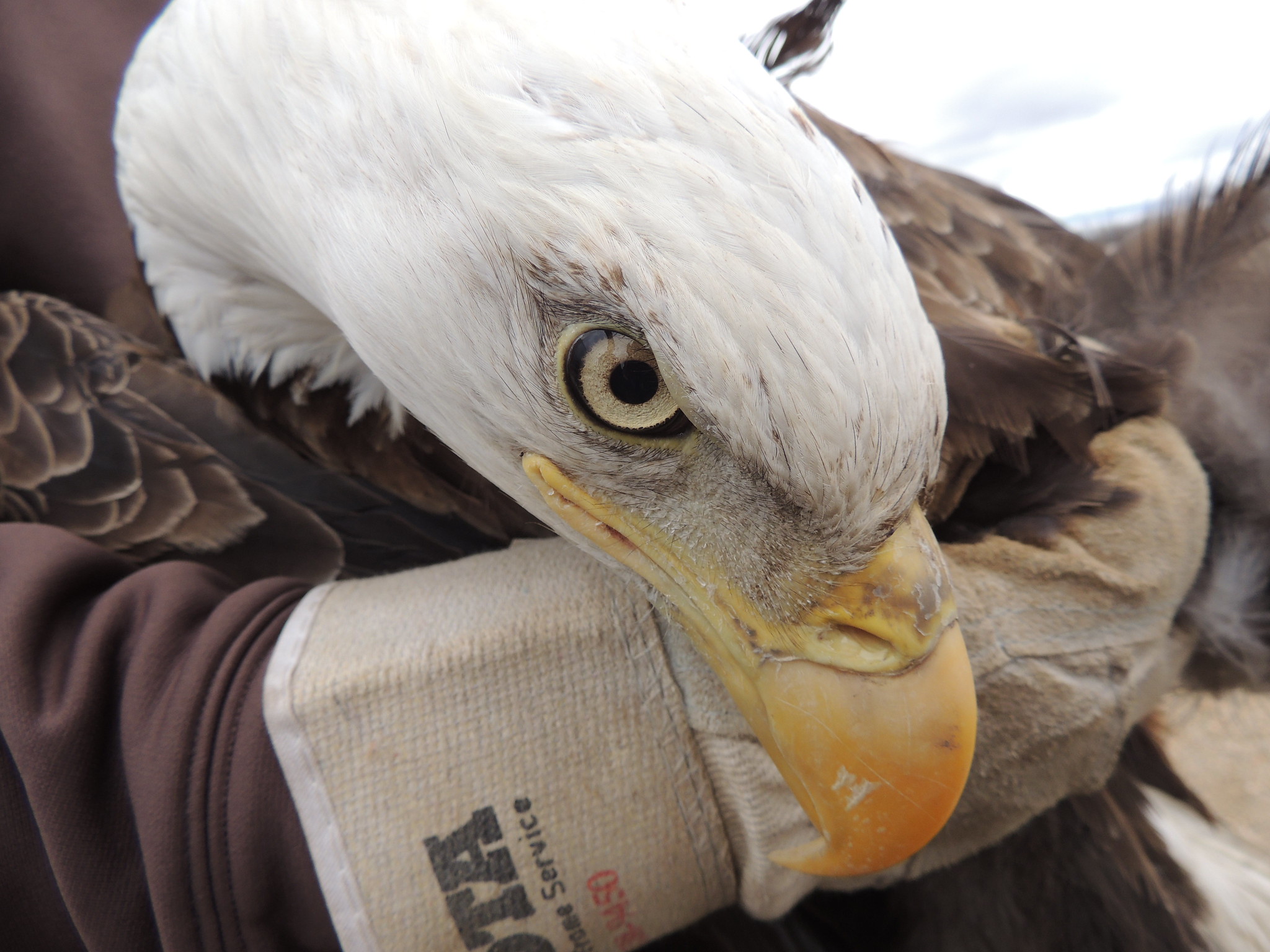 The National Eagle Center considers lead to be the biggest current threat to bald eagles — and these tragedies are entirely preventable. (Photo by Kimberly Emerson/USFWS via Flickr)

Bald eagles are awe-inspiring symbols of nature’s beauty. The sight of one of these raptors soaring above the Mississippi River — impossibly long wings stretched to their limit, white head feathers sparkling in the sun — makes even the most preoccupied passerby stop and stare.

Yet all too often a bald eagle’s remarkable life ends unceremoniously. Lethargic, gasping for air, unable to stand and convulsing uncontrollably as tiny amounts of a human-introduced toxin pervade the once-powerful bird’s body.

The culprit in these cases? Lead ammunition.

Many people think bald eagles eat only fish. While that is usually their main food source, the species will also happily feast on deer carcasses, including those left behind by hunters.

The unintentional poisoning of eagles can occur when a bald eagle scavenges the carcass of deer killed by lead ammunition. The raptor’s ensuing illness is the predictable consequence of using lead rounds rather than readily available non-lead alternatives while hunting. 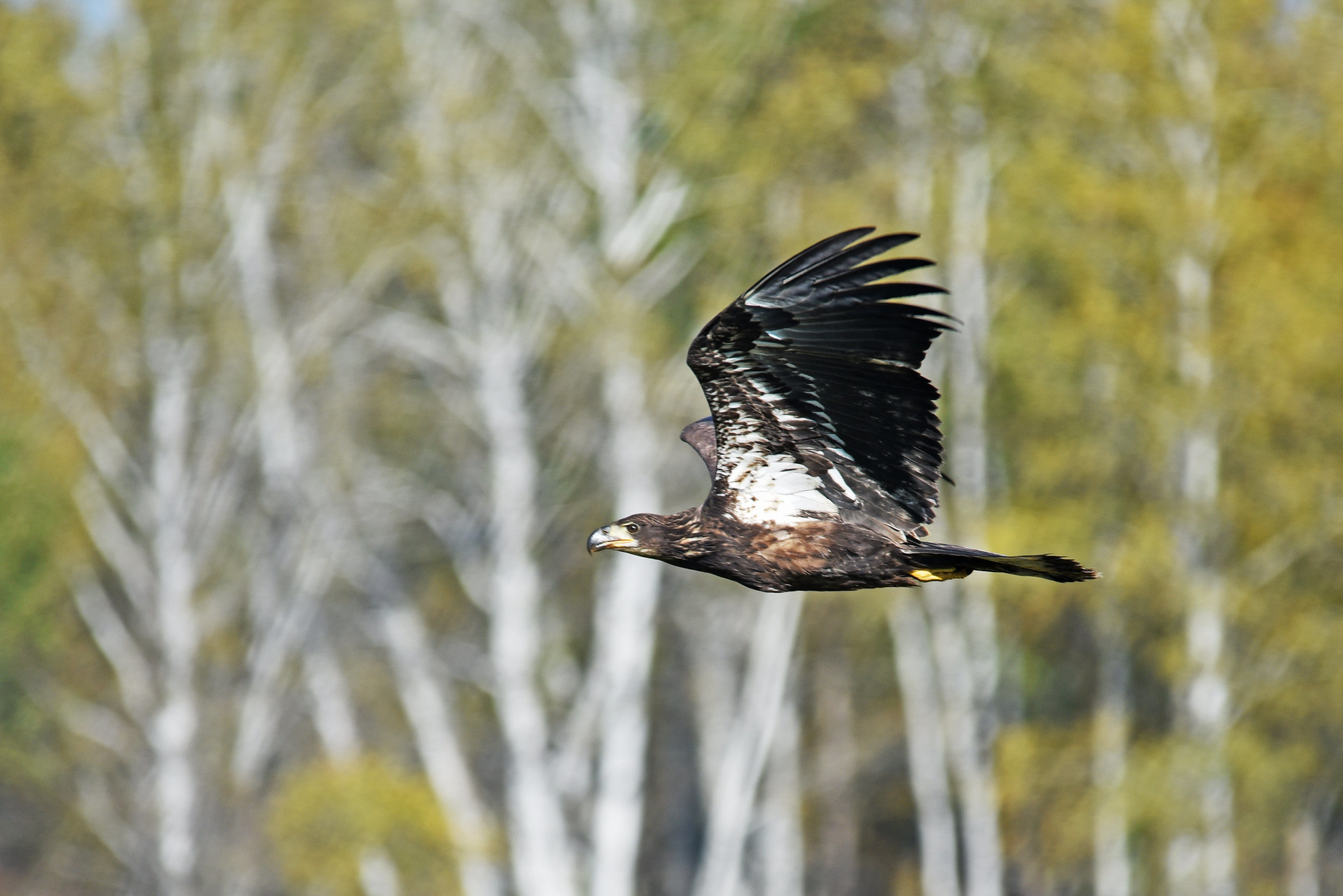 A juvenile bald eagle in flight. (Photo by Courtney Celley/USFWS via Flickr)

Lead rounds, which are still widely used by deer hunters, fragment on contact, breaking into pieces that are often too small to be seen, felt or tasted. These shards can also end up deep into the harvested animal’s tissue, far enough that the Minnesota DNR found routine trimming “likely will not remove all of the fragments.”

Unfortunately, lead is incredibly dangerous to bald eagles, and even tiny amounts can prove to be fatal, the National Eagle Center says. Golden eagles are also susceptible to lead poisoning, as this post from the University of Minnesota’s Raptor Center shows.

When ingested, lead is a neurotoxin and interferes with the nervous system. Lead-poisoned birds are weak and struggle to breathe. Their gastrointestinal tracts begin to shut down and the birds can be found twitching, with abnormal breathing and soft vocalizations. Here’s a relatively mild video of a poisoned eagle from the Raptor Education Group in Wisconsin. This eagle was in critical condition.

The demise can be much more gut-wrenching. Some eagles are brought into rescue centers seizing uncontrollably from lead toxicity, as seen in this YouTube video. (Please be aware, the video at the link is upsetting.)

The scope of the problem

The National Eagle Center lists lead as the biggest current threat to bald eagles — a species that was pushed to the brink of extinction in the mid-20th century, only to rebound thanks to concerted protection efforts such as the banning of DDT.

The Raptor Center says lead poisoning is so prevalent that it tests every single admitted bald eagle for the substance, regardless of why it was brought in. About 85% of the admitted bald eagles have at least some level of lead in their bloodstream.

While some can be saved with extensive treatment, the Raptor Center says 25-30% have lead toxicity and either die or are euthanized to prevent extreme end-of-life suffering.

We’ve known about the risks of lead rounds for decades. The state banned lead shot for waterfowl hunting in 1987. The federal government followed suit shortly thereafter. In California, non-lead ammunition is required when taking any wildlife with a firearm.

The Minnesota DNR has considered extending the ban to other small game for well over a decade, though those efforts have been largely stymied by opposition from some hunters. In 2019, the agency rejected a petition to ban lead ammunition (and fishing tackle, another problem for many bird species), saying the proposed rule was too broad. Though in 2022 the DNR took steps to require the use of nontoxic shots on some state parks and SNAs, beginning that fall.

Minnesota hunters and anglers can choose lead-free shot and tackle.

And you can join FMR in supporting legislation that would ban lead ammunition and fishing tackle in Minnesota. Sign up to be a River Guardian and we'll let you know when to weigh in on issues like this that affect our river and its wildlife.