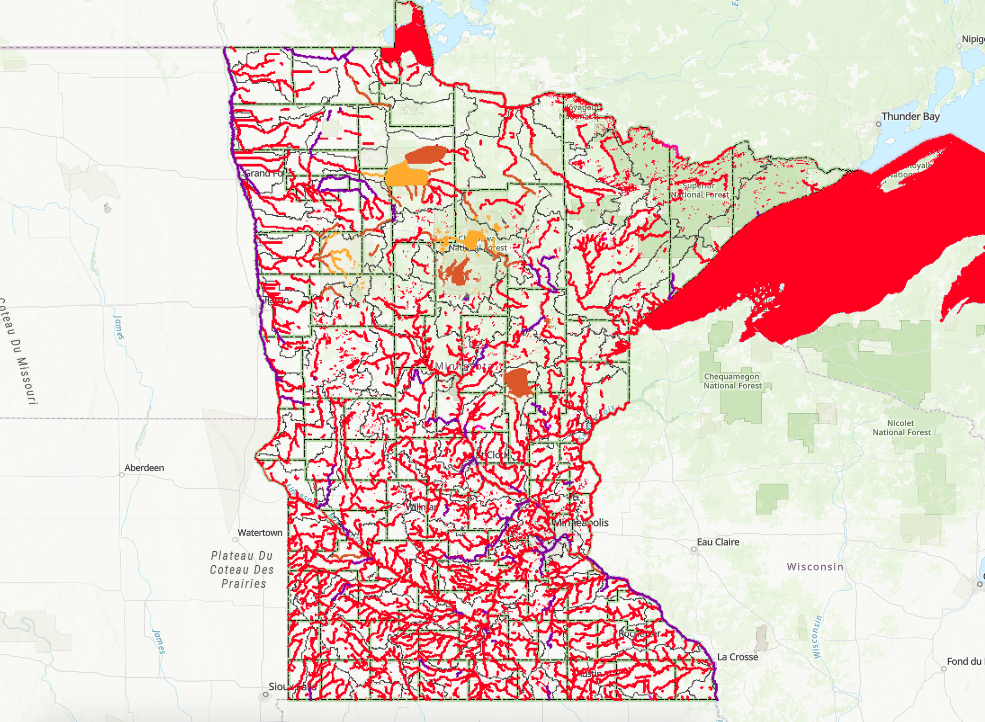 In the Land of 10,000 Lakes, FMR believes that all Minnesotans deserve access to safe, clean and healthy rivers, lakes and streams. But how do we know when our waters are healthy?

Of the 5,774 impairments the state has identified, high levels of mercury in fish tissue and the water column are the most common, comprising 29% of all impairments. The state’s approved 2007 mercury cleanup plan calls for significant reductions from in-state sources but does not empower the state to address mercury emissions from outside our borders – where 90% of the mercury in our waters originates.

Of the remaining causes or classifications of impairments, impaired fish (16%) and macroinvertebrate (14%) health, and excess bacteria (14%) are the most common. Excess nutrients (13%), excess sediment (7%) and low dissolved oxygen (3%) are also frequent.

In addition, the state lists a handful of less frequent impairment statuses due to PCBs in fish tissue, excess chloride from deicers, PFOS and even some pesticides.

Some waters can be impaired for more than one pollutant, which is why there are 5,775 total impairments for the ~3,400 bodies of waters included on the list.

Since voters approved the 2008 Clean Water, Land and Legacy Amendment, the state has been diligently working to evaluate all of Minnesota’s watersheds every two years. As time has passed, the state has collected ever-more data about the health of each of the 80 major watersheds in our state.

This year represents an important milestone: it’s the first time that the state has comprehensive monitoring data from all 80 major watersheds!

Unfortunately, as the state collects more data, it finds an increasing number of waters that fail to meet standards. This year, the list of impaired waters includes an additional 581 bodies of water, mostly because the state now has sufficient data to make the determination that those waters are impaired.

FMR's water program is working with partners across the state to address many water pollution and public health issues — including restoring each and every one of Minnesota’s impaired waters.