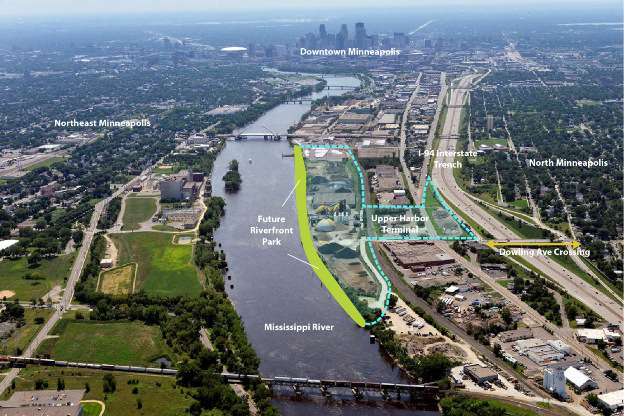 The purpose of the study was to analyze potential future development scenarios for the Upper Harbor Terminal (UHT), 48 acres of city-owned riverfront land located between Lowry and Dowling Avenue North. Also known as the Port of Minneapolis, the barge terminal operation closed last year after Congress voted to close the Upper St. Anthony Falls Lock in early 2015.

A primary goal of the new UHT study was to assist the City and Park Board in deciding how to divide the UHT site between park and development, in a manner that will provide both viable, flexible development sites and park parcels that will accommodate the desired linear park and parkway connections and high quality park amenities. The study also examined park and public infrastructure improvements that would be needed, estimated their costs and identified potential funding sources or mechanisms. The last chapter in the report provides a proposed redevelopment framework with guiding principles, initial conclusions (of city staff and consultants) and a phasing strategy.

Planning for a different future at the UHT site has been under consideration for almost two decades, with discussions dating as far back as the late 1990s when the original version of the Above the Falls Master Plan was created. A hallmark of the award-winning plan was to phase out commercial navigation, close the UHT, and convert the site to new riverfront parks, trails and redevelopment. A 2004 study co-sponsored by FMR, American Rivers and the City of Minneapolis took a closer look at the UHT site, and included a design charrette and feasibility analysis for three scenarios with parks, open space and residential development. At the conclusion of this study, FMR was optimistic that the UHT would be closed and redeveloped within a few years, but the economic downturn and competing city priorities delayed progress until now.

In 2013, the city updated the Above the Falls Master Plan and changed the future land use for the UHT site from residential/neighborhood to business park and mixed use development. The Minneapolis Park & Recreation Board (MPRB) also drafted a revision of the Above the Falls Regional Park Plan, a companion to the citys master plan. Both versions of the new plan included parks, trails and a parkway along the riverfront on the UHT site, but MPRBs version expanded the park acreage to approximately 30 acres to accommodate the Northside Wetlands from their 2011 RiverFirst vision. The Citys version of the plan reduced the parkland on the UHT site to a narrow green strip with less than 20 acres. How the UHT site would be divided between parkland and redevelopment was not resolved, leaving final adoption of both riverfront plans in limbo. Until the City and the MPRB agree upon the regional park boundary, the Metropolitan Council cannot approve either Above the Falls plan revision.

Now that the study has been released, City and MPRB staff are briefing elected officials and community organizations on their findings, and discussing next steps in the process. FMR and the Above the Falls Citizen Advisory Committee are currently reviewing the report and developing recommendations for the next phase of planning for this prime riverfront site.

According to FMR executive director Whitney Clark, Friends of the Mississippi River believes repurposing of the UHT site offers an unparalleled opportunity to revitalize the riverfront in North Minneapolis with new parks, trails, open space and economic development that can provide many benefits to the local community, the regional park system, and the health of the Mississippi River.

Learn more about the planning process and sign-up to receive project updates at the citys UHT project page.