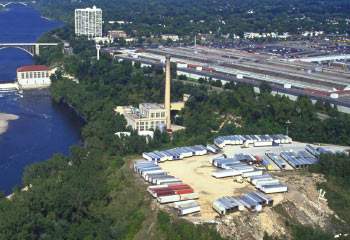 On July 24th, the Ford Motor Company announced their St. Paul Assembly Plant will not close as expected in the fall of 2009. Instead, Ford executives committed to keep the Highland Park Plant open through 2011.

Sitting atop the Mississippi River bluff in Highland Park, the St. Paul Assembly Plant has been churning out vehicles for most of the last century. But in 2006, Ford announced they would be soon closing their plant, and investigating opportunities to redevelop their 125 acre facility. The City of St. Paul has sponsored extensive discussions on possibilities for redeveloping the site. As such, the extension of the plant's operation came to many as a surprising turn of events, even if generally well-received.

Company officials said plant's life was extended in response to comparatively strong sales of their lightweight Ford Ranger pickup, which are produced in St. Paul. Despite an aging design, the Ranger has enjoyed stronger sales in recent years as consumers have opted for more fuel-efficient trucks and cars.

Yet officials also know that the Ranger hasn't been overhauled in many years, and a key date for redesign looms somewhere on the horizon. The overhaul of the Ranger design remains a natural point at which to consider shifting production to a different facility.

In response to the initial closure announcement, the City of St. Paul named a 24-member Task Force to wade through site conditions, potential and help plan for the site's future. The Ford Task Force has been busy sorting through information on site conditions, pollution reports, market data and other variables that will help refine the sorts of uses that will ultimately be appropriate for the site.

To date, they have produced five alternative scenarios which will be the basis for the project's environmental review. They are currently assessing the fiscal performance of the various development alternatives.

City Project Manager Merritt Clapp-Smith says the timeline will allow the St. Paul to take more time to look at key issues, and in particular sustainability. Many community members have seen the Ford site's location and marketability as a key opportunity to more fully realize sustainable development practices.

That focus on sustainability will take several key forms. Over the next year, the City will engage a small group of experts on what elements of green design make the most sense to emphasize on the site. Another group of individuals will focus on how to approach stormwater issues, particularly in the context of a site bound to have major soil pollution. Yet another initiative will investigate the potential of green manufacturing on the site. Finally, next summer, a small team of consultants will spend a few days identifying reuse scenarios for the land Ford owns on the riverward side of Mississippi River Boulevard.

Like the City, this change in timeline will help give FMR more time to work on our project components as well. As reported here last month, FMR is working on two key pieces of the planning process. First, FMR is putting together possible concepts for the land Ford owns on the riverward side of Mississippi River Boulevard. Second, were putting together a viewshed anaysis that will show the visual impacts of various development scenarios for the site, to help minimize the visual impacts on this key stretch of the River valley.

The City's Ford Task Force will continue refining a vision for this site's future, and FMR is happy to be able to take this extra time to make sure whatever the future of this site, it becomes a key asset for the Mississippi River corridor and surrounding community.