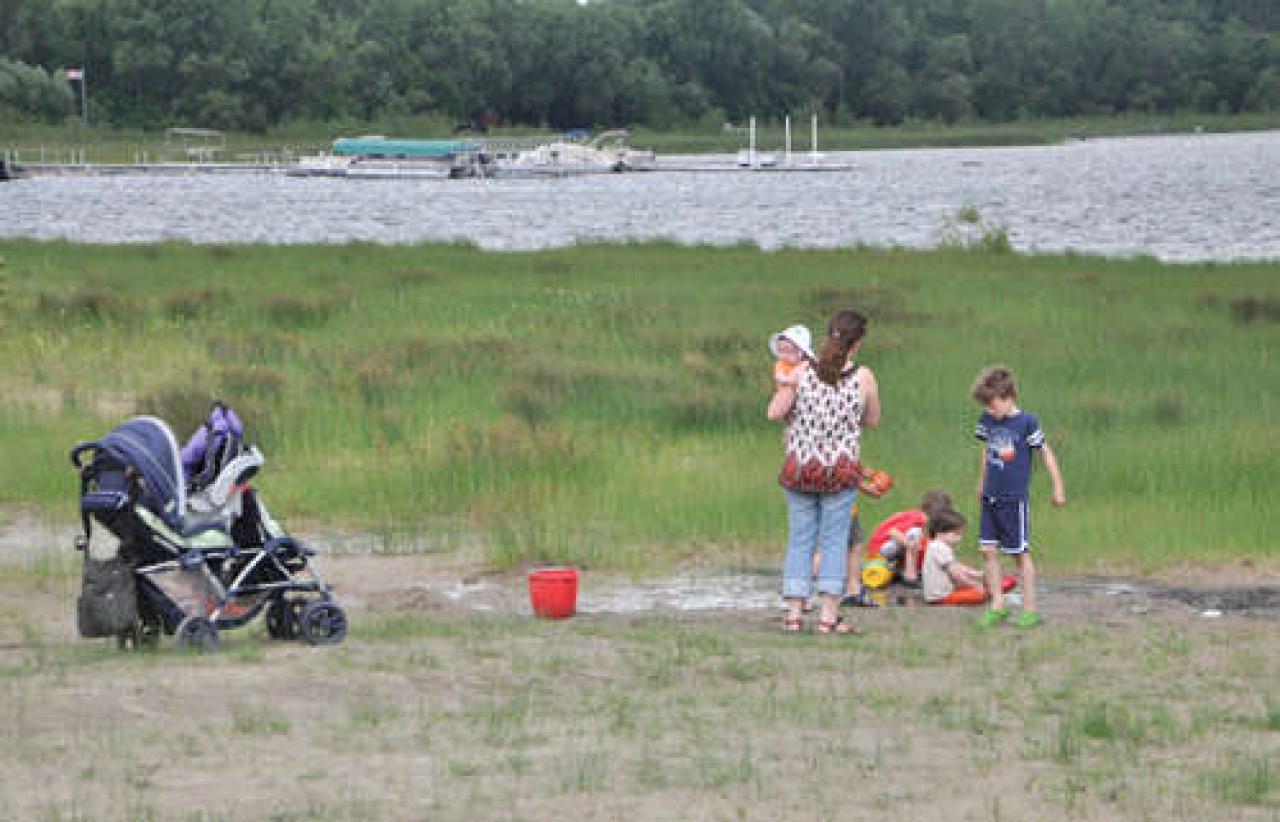 White Bear Lake — celebrated in F. Scott Fitzgeralds stories as a gala summer playground — now looks more like a recreational ruin. Docks are marooned many yards from the receding shoreline and a beach, now overrun by weeds, has been shut down by local officials.

The second largest lake in the Minneapolis-St. Paul region has lost more than a quarter of its water volume over the past decade, according to a report from the Freshwater Society. Greg McNeely, president of the White Bear Lake Restoration Association, told the Star Tribune that recreational use of the lake is down 70 percent.

The consequences go beyond disappointed boaters, anglers, swimmers and beachcombers; homeowners around the lake have seen their property values plunge as much as 40 percent. Rep. Peter Fischer, who represents the area in the Minnesota House, says this affects everybody in these communities because they must make up the lost property tax revenues when those houses are sold.

There are two causes for this tragedy, says James Stark, water science director for the US Geological Survey in Minnesota. One reason is below average precipitation in recent years, which is outside of our control. The other reason is increased pumping of groundwater by fast-growing suburban communities across the eastern metropolitan area, which has lowered water levels in the Prairie du Chien-Jordan aquifer that feeds White Bear Lake. This, however, is a problem we can do something about.

White Bear Lake is not alone in facing a groundwater crisis. A Freshwater Society report cites 16 areas around the state from Bemidji to Rochester where groundwater levels are seriously depleted due to overuse by industry, irrigation or municipal water supplies.

White Bear Lake is the tip of the iceberg, says Ali Elhassan, water supply planning manager for the Metropolitan Council. Its a bellwether, showing us what will happen in other parts of the region if we continue current practices. We cannot continue business as usual without inflicting irreparable harm.

It comes as a shock to boat- and beach-loving Minnesotans that the Land of 10,000 Lakes and birthplace of the Mississippi River might soon see water shortages. But as Jason Moeckel, section manager for ecological and water resources at the state DNR, explains, We are increasing the amount of groundwater we withdraw every year by three billion gallons. Are we at risk of overuse? Yes, since all the growth of water use is groundwater.

Most people arent aware of the ecological link between groundwater and the surface water in rivers or lakes. The idea that groundwater flows upward to fill a lake didnt make sense to people until this happened, notes Deborah Swackhamer, co-director of the University of Minnesotas Water Resources Center and professor of Environmental Health Science.

FMR Executive Director Whitney Clark explains that groundwater even feeds rivers and streams. We think of them as different, but underground aquifers provide the base flow for surface waterthats the water you see flowing in a stream even when it hasnt rained for six weeks.

The High Price of Cheap Groundwater

Our groundwater use is growing faster than the population, FMRs Water Program Director Trevor Russell points out. In the 1940s, he says, 90 percent of the metropolitan area relied on the Mississippi River and other surface sources for water, which is replenished by rainfall. Faucets in Minneapolis, St. Paul and 14 adjoining suburbs still flow with safe, treated river water, but more than 70 percent of the metropolitan water supply now comes from groundwater, which is easily depleted.

Newer communities find it cheaper to drill into aquifers rather than share in the Minneapolis or St. Paul regional water utilities, which have plenty of extra capacity. After the initial construction of a new well, it costs very little to pump out water, which means communities can make a profit on water services.

Pumping groundwater generates local revenues, but at a great ecological and economic cost, says Russell-a fact that wasnt apparent to most people until water levels in White Bear Lake began to fall. Now theres an intense discussion around the region, from bait shops to the State Capitol, about how best to save White Bear Lake and ensure that Minnesotans everywhere dont have to choose between safe drinking water and the health of our lakes, rivers and streams.

What Can We Do?

There is no magic fix for the problem, explains Swackhamer. The root of the problem is an overuse of groundwater. Finding another source of drinking water is the best solution and the most sustainable, but it will take time and cost money. Some people are urging that billions of gallons of Mississippi River water be diverted to White Bear Lake each year to restore water levels. This is known as the augmentation option.

However, it will cost $50 to $55 million to create a new system to treat and pump river water to White Bear Lake, and $325,000 a year to operate it, according to preliminary findings from the Metropolitan Councils Feasibility Assessment of Alternative Water Supplies in the Northeast Metro (due out in October). These costs will jump sharply if it turns out river water also needs to be treated for nitrates and phosphorous to keep White Bear Lake and the entire aquifer cleanadding $40 million more in construction and $600,000 more annually for operations.

This legislative session the Minnesota Senate has preempted a still in progress Met Council feasibility study by approving spending $800,000 to study and design an augmentation system. The House did not include any funding for the project in their spending bill. Differences between the House and Senate bills are expected to be worked out by a conference committee with members from both bodies within the next several weeks.

Even with this steep investment, the effectiveness of such a system is not certain, said Metropolitan Councils water supply planning manager Ali Elhassan in an e-mail to local leaders on February 20.

Augmentation does not solve the problem, notes FMRs Whitney Clark. Its like buying a very expensive raincoat because your roof is leaking.

He adds, "It sets an unwelcome precedent. Every time there is a water shortage somewhere, you can just take more and more water out of the Mississippi River for the mistakes youve made."

FMR is one of a number of organizations pushing for a sustainable solution for the northeast metro known as conjunctive use, which relies primarily on surface water with groundwater wells as a backup for drier parts of the year and droughts.

Heres how it would work. Suburban communities in the northeast metro, which are now draining White Bear Lake through overuse of groundwater, would switch to surface water for their primary water use while retaining existing wells as a backup system. Surface water could come from either the St. Paul regional water system (which could treat 40 percent more water daily with existing facilities) or a new treatment facility built for the Northeast Metro.

In either scenario, the water is drawn from the Mississippi and then passes through a series of lakes and into a lake reservoir before it is treated and pumped to nearby communities.

We think conjunctive use is the best option for the future, says Elhassan. Our modeling shows we can reverse current groundwater trends if more communities in close proximity to the central cities switch from groundwater to surface water use, he adds.

Water conservation measures would also be deployed as part of the conjunctive use approach. Jason Moeckel of the DNR notes, our rate of water consumption is high compared to a lot of states.

Moeckel points to innovations such as capturing more rainfall in urban areas to put back in aquifers to recharge groundwater and detecting leaks in the existing pipe systems, which can account for as much as 40 percent of water use. He notes that Rochester, which has vigorously scrutinized its system for leakage, now loses less than five percent of water on the journey from the treatment plant to the kitchen sink.

Water use in the City of White Bear Lake decreased 21 percent from 2000 to 2011 says Janice Hallman of the White Bear Lake Conservation Committee. Water conservation works, she observes, noting that overall usage of water from St. Paul Regional Water Services has also dropped 25 percent since 1988.

For all of its advantages in solving the groundwater crisis in the Northeast metro rather than adopting a band-aid approach, conjunctive use will mean higher water bills for residents of some communities who have benefitted from artificially low prices made possible through depletion of precious aquifer resources.

A Sustainable Future for Groundwater, Lakes and Rivers

The biggest obstacle to conjunctive use is that some communities currently have cheap water and are unwilling to pay more. However, Clark says that over the long run, conjunctive use is the least expensive option. Well be escalating the costs to future generations if we dont do something.

He also raises the issue of who should pay to fix the problem. Should we all pick up the tab for unsustainable decisions in some communities that allowed residents to benefit from cheap water?

Clark remarks, "Any decisions about the future of our groundwater, lakes and rivers must be guided by the principle of sustainability, which means meeting the needs of the present without compromising the ability of future generations to meet their own needs. That's the essence of stewardship. Let's set our water policies in a way that our downstream neighbors and future generations will respect and appreciate."