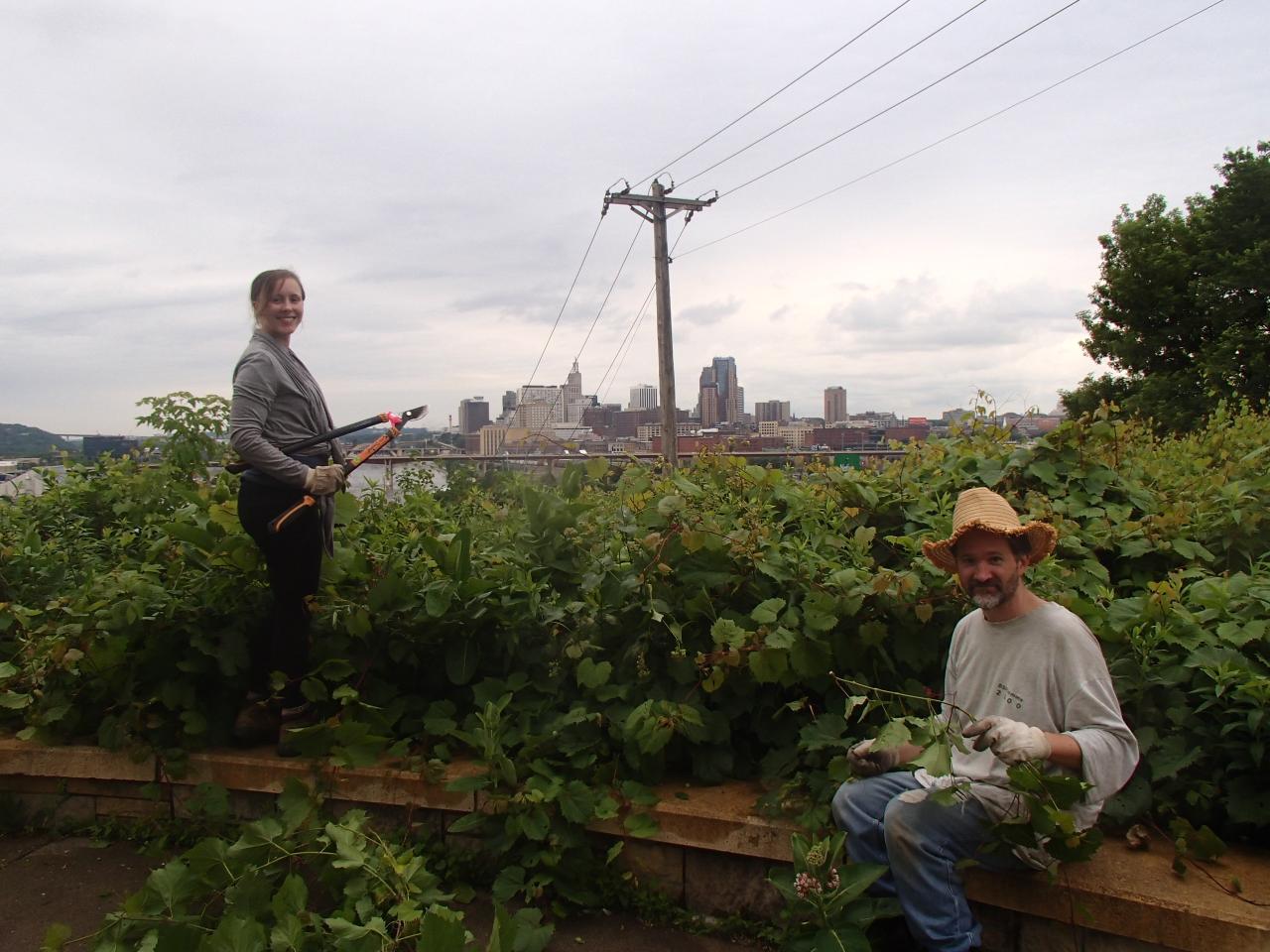 Indian Mounds Park in St. Paul may be small, but it harbors a wealth of ecological, cultural and historical importance.

This park is the site of six ancient burial mounds used by native inhabitants of the region. While many mounds in the state were destroyed by development, this site remains intact and is listed on the National Register of Historic Places. Indian Mounds Park is also part of the Mississippi National River and Recreation Area.

Also important is the beautiful view of the Mississippi River and downtown St. Paul from the park's natural blufftop.

Historically, bluffs at Indian Mounds Park would have been a dry prairie or oak savanna landscape, prone to occasional wildfires that would restore nutrients to the soil and allow native plant species to regenerate. As St. Paul grew, fire suppression, soil degradation, and recreational use caused the park became overgrown with invasive species. These invasive species outcompete native plants but provide little value as food or habitat to insects, birds and wildlife. 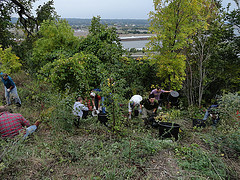 Volunteers restore native plants with a view of the river.

Specific plants that affect the ecosystem of Mounds Park include buckthorn, burdock, and garlic mustard.

Removing invasive species and restoring native prairie plants are important to reducing erosion in Mounds Park. Native prairie plants have long, tough roots designed to hold soft prairie soil in place. Without these plants, the soil can easily wash away in heavy rains.

Harding High Schools Earth Club completed much of the initial work. The group the site with FMR staff in September 2011 to learn about native and invasive species and returned later that fall to begin clearing brush. Over the last 3 years, students have donated multiple Friday afternoons to pulling weeds, planting native shrubs and wildflowers, and picking up trash at the overlook. 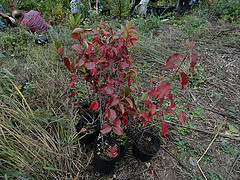 Native species are ready to be planted.

Community volunteers have built upon the local youths contributions, helping to move the project forward. Approximately 20 volunteers returned to the area where the invasive shrubs had once stood to plant native species on the overlook in fall 2013 and this May.

Since then, Earth Club students and other community volunteers have continued to remove invasive species and plant hundreds of native shrubs, grasses, and forbs or flowers in their place. The restoration area has expanded to include the southern leg of the overlook area. 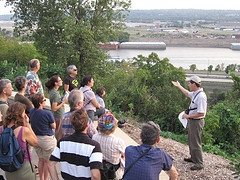 Tugboat pilot and Friends of the Mississippi River boardmember Hokan Miller is known for his riveting tales of our working river. (Photo credit: Katie Clower for FMR)

Friends of the Mississippi River partners with Saint Paul Parks and Recreation in its work in Mounds Park. The project also builds upon the work of Friends of Mounds Park, the local volunteer-based, citizen participation group endorsed and recognized by the District Four community council that has long advocated for this community asset.