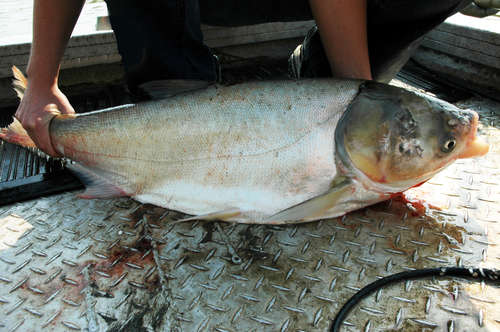 Traces of DNA from silver carp (above) were recently detected farther upriver than many experts expected.

With the discovery of silver carp DNA further upriver than most experts expected, the invasive carp alarm recently went from loud to deafening. Environmental DNA (eDNA) from silver carp, one of four species of invasive carp, has been found in water samples taken upstream of the Coon Rapids Dam several miles north of Minneapolis. Voracious eaters that consume copious amounts of plankton, snails, mussels and other small aquatic life, invasive carp threaten to disrupt and destroy Minnesota's prized freshwater habitat.

The presence of invasive carp so far north was unexpected, as the Minnesota Department of Natural Resources and others believed the Coon Rapids Dam would be an effective barrier to upstream migration of this and other invasive species. The state is poised to spend $16 million on dam upgrades to ensure its continuance as an invasive carp barrier  a plan that looks like it could be too little, too late.

"We have been concerned for months that, with or without the planned upgrades, the Coon Rapids Dam is not high enough to stop invasive carp from spreading into northern Minnesota," said FMR Executive Director Whitney Clark. "These fish tend to migrate and spawn during high water, which is exactly when the dam is ineffective as a barrier."

If actual silver carp (and not just their DNA) are this far north, they could be on their way to Lake Mille Lacs. Some researchers, such as fish biology professor Peter Sorensen of the University of Minnesota, think silver carp may have been this far upstream for 10 years. However, Sorensen is quick to point out that this possibility of a longer-term presence does not preclude opportunities to limit its spread. "We need to develop new technologies, tools, and understandings if we're going to win this war on invasive species, and it's not just silver carp, it's other species too," Sorensen said in a recent MPR interview (link below).

A coalition of nongovernmental organizations is calling for swift action that includes an immediate temporary closure of Lock #1 and the Upper Lock at St. Anthony in downtown Minneapolis until a long-term solution can be implemented. However, Congressional action is required to direct the Army Corps of Engineers to close the locks even temporarily, and such things typically don't happen quickly. The coalition also supports additional barriers downstream from Minneapolis and longer-term actions such as additional research and development of new technologies to safely eradicate invasive carp or manage their population.

One possible interim solution that has both broad support and could be implemented fairly quickly is the installation of a sonic or bubble-sound barrier at Lock #1 coupled with limited lock operations. This would require cooperation with the Army Corps of Engineers, but not Congressional action.

Gov. Dayton has been holding a series of summits on the invasive carp this fall with members of Minnesota's congressional delegation, state legislature and agencies, local governments, nonprofit groups and other stakeholders to refine the Governor's Action Plan and identify key next steps. The next summit is tentatively scheduled for Dec. 20, 2011.

For more information on this issue in general, please contact FMR River Corridor Program Director Irene Jones at 651-222-2193 ext. 11 or via our contact form.