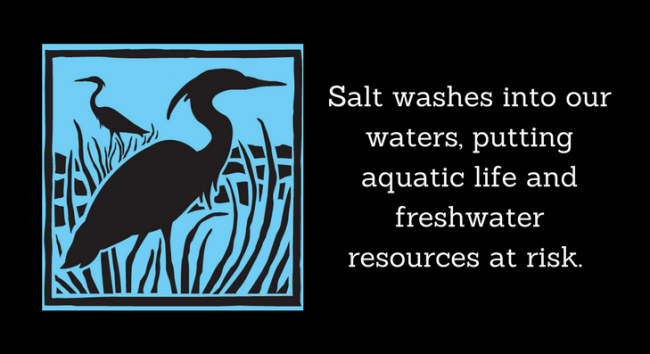 As we noted in the State of the River Report, chloride or salt pollution is a growing problem for Minnesota's waters.

This session, FMR has joined a large coalition of groups supporting legislation that aims to reduce chloride pollution. The bill would provide liability relief for salt applicators who have completed certified training through the Minnesota Pollution Control Agency. This helps remove the incentive for overapplying salt in winter, helping to reduce chloride pollution into our waterways.

The bill has been heard and passed through several committees (Environment and Natural Resources Policy and Finance, Civil Law and Data Practices Policy and Ways and Means) with strong support from a diverse coalition of stakeholders. Only the Minnesota Association of Justice (personal injury lawyers) testified against the bill.

We are very grateful for the support of many legislators, especially Representative Anselmo (R- Edina) and Chair Fabian (R- Roseau) in the House, without whom this progress would not be possible.

Senate status (SF 3199): The bill passed the Environment and Natural Resources Policy and Legacy Finance on March 21. Unfortunately, the language stalled in the Judiciary and Public Safety Finance and Policy committee will not advance.

Despite bipartisan support, the chloride bill will not pass as a stand-alone item in either chamber. Most likely it will be wrapped into larger omnibus bills, combining language from multiple smaller bills.

The omnibus approach makes it easier for the Legislature to pass bills before the session concludes — especially finance provisions that take more time to negotiate. However, it comes with risks, as we’ll discuss below.

Next steps in the Legislature

As the House and Senate will likely pass different versions of an omnibus environment bill, the two chambers will form a conference committee to combine the two environment bills into one that can pass both chambers before being sent to Gov. Mark Dayton.

We’re told that the Senate is open to including the House’s chloride language in conference, which greatly increases its chances for passage out of the Legislature. However, the long-term prognosis for the bill being signed by the governor is murky at best.

Headed for a veto?

Earlier we mentioned a downside to the omnibus bill approach. Combining lots of provisions into a single bill only works if the governor is willing to sign that bill.

This year, there are some controversial provisions that will likely be included in both the House and Senate omnibus environment bills. If those provisions survive the conference committee process and are included in the final bill, the entire bill may earn a veto from Gov. Mark Dayton.

FMR and our allies will continue to track this and other bills and the legislative process advances, and we’ll do our best to update you on key environment and water quality issues on our legislative updates blog. Check back regularly! Or sign up for Mississippi Messages to receive a monthly digest of FMR updates, volunteer and education events.

Water Action Day is Minnesota’s day to let lawmakers know we care about our water!

It's free, fun, and you can sign up for all or part of the day — whatever works for you!