Passed (with a side of controversy): Environment & Natural Resources Trust Fund appropriation | Friends of the Mississippi River
Skip to main content

Passed (with a side of controversy): Environment & Natural Resources Trust Fund appropriation 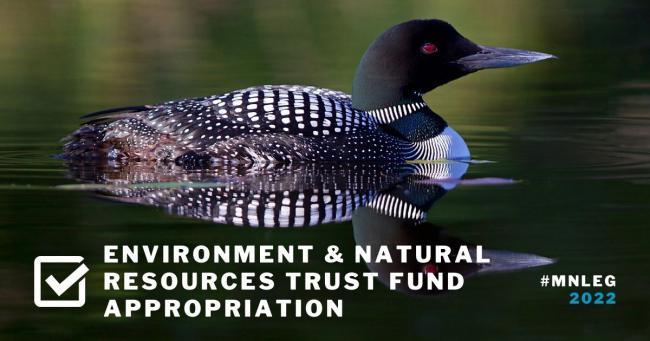 In 1988 (and twice more since then), Minnesota voters approved a constitutional amendment to dedicate state lottery proceeds to the state’s Environment & Natural Resources Trust Fund (ENRTF). The state fund was created specifically for the protection, conservation, preservation and enhancement of "the state's air, water, land, fish, wildlife, and other natural resources."

While FMR River Guardians took action to advocate for the renewal of lottery money dedicated to this vital fund, lawmakers ultimately stalled on that issue.

On the bright side, the 2022 ENRTF appropriation bill (HF3765) was finalized by lawmakers on the final weekend of the legislative session. It passed the House on a vote of 115-19 and the Senate 67-0, making it one of the few bills to get done before the deadline. The bill itself allocates $70.88 million to Minnesota’s environment from the fund.

What the legislation includes

For the most part, the bill divides $70,880,000 in ENRTF dollars across several areas of investment for the 2023 state fiscal year. These investments include:

The legislation also specifies funding for a series of projects that are likely to directly benefit the Mississippi River, including:

In addition, the funds provide significant new resources to Forever Green-related investments on top of what was included in the Agriculture omnibus package. This includes $763,000 in funding for the University of Minnesota’s Forever Green Initiative and $500,000 in additional funding for Continuous Living Cover Value Chain Development grants (FMR's top two legislative priorities this session). It also includes $476,000 in funding to the University of Minnesota for camelina development and $490,000 for the research and development of perennial flax.

While each of these investments is excellent, it's especially gratifying to note that $2.2 million overall was dedicated to items specifically related to Forever Green agricultural systems in Minnesota.

As has been the case in recent years, the ENRTF bill was subject to considerable controversy. There are three major areas of concern with the final bill.

The first controversy is that the allocations themselves include funding for a series of provisions that were never heard or reviewed by the Legislative Citizens Commission on Minnesota Resources (LCCMR), the body charged with reviewing and ranking proposals for use of ENRTF dollars. This includes recommendations for several projects we love, including Forever Green, CLC Value Chain grants and Pigs Eye Landfill remediation.

This represents a highly unusual departure from traditional norms and raises serious concerns about lawmakers' respect for the rigorous application and vetting process used by the LCCMR.

The second controversy is that all land acquisition dollars were removed from the bill (largely at the insistence of the Senate), reducing investment in a variety of land protection projects like prairie banks, Scientific and Natural Areas, and trail building that previously won LCCMR endorsement.

The third controversy is that the bill directs funds for a potentially illegal purpose. The Minnesota Pollution Control Agency opposes a specific appropriation directing a new study of water contamination related to leaded gasoline contamination under the emerging issues account. This appropriation may represent an illegal use of ENRTF dollars under state statute (116P.08 Subd 2 (1)).

Despite these concerns, Gov. Walz signed the complete bill on June 3. However, we were gratified to see him author a strongly worded statement to lawmakers scolding them for failing to honor the work of the LCCMR:

We are grateful to see the governor weigh in on this issue, and we remain hopeful that his warning to lawmakers will be heeded next session.

Note: This article was originally published on May 24, 2022. On June 16, we added the section "Gov. Walz signs bill — and scolds lawmakers."