In their final action of 2009, the Minneapolis Park and Recreation Board (MPRB) voted to put $400,000 in earnest money toward an eventual purchase of property owned by Scherer Bros. Lumber Co, located at 9th Avenue Northeast along the river.

MPRB's purchase of the site will expand open space along the river in northeast Minneapolis and provide a key trail connection from Boom Island Park to planned bike and pedestrian trails to the north. Continuous parks and trails on both sides of the river is a core goal in the award-winning Minneapolis Above the Falls Plan, and ten years after the plans adoption, the first phase of the plan is well underway. 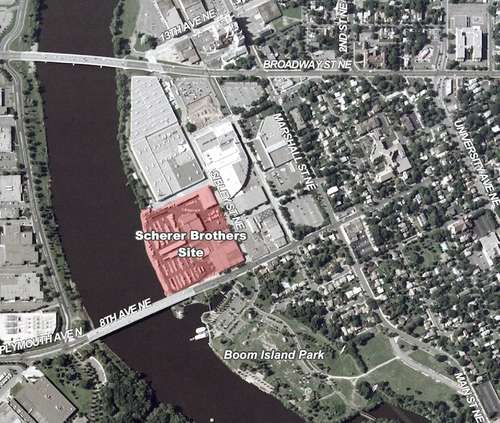 This northeast lumberyard site may turn into riverfront parkland.

Last year, MPRB completed development of new parkland and trails along the west side of the river from Plymouth Avenue north to the Burlington Northern Railroad Bridge located at approximately 25th Avenue North. The purchase of the Scherer Bros. site will be a key step towards mirroring those trails along the east side of the river. Additionally on the east bank, Sheridan Memorial Park is being installed just north of Broadway Avenue and agreements are in place to allow trail easements to connect most remaining river frontage up to the railroad bridge. It is hoped that someday the railroad bridge could provide a cross-river connection, linking park trails on both sides into a loop.

MPRB has indicated there will be a planning process for the Scherer Bros. site, the details of which will be available in the near future. Stay tuned to FMR's website and other media for updates! (In addition to this newsletter, our RSS feed is a great way to stay current on river- and FMR-related news.

In the news so far: