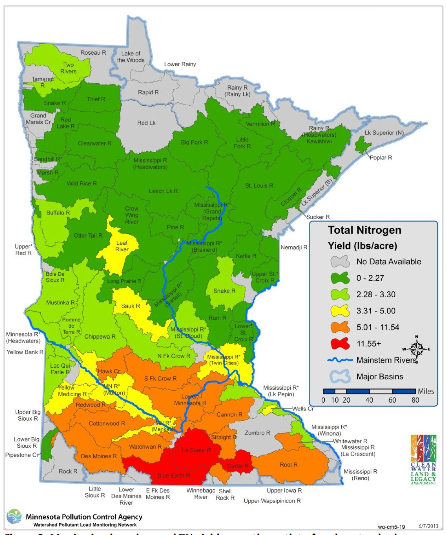 The study was a collaborative effort led by Minnesota Pollution Control Agency, with assistance from the University of Minnesota and the U.S. Geological Survey. The report team used more than 50,000 water samples collected at 700 stream sites and used 35 years of monitoring data and findings from 300 published studies. 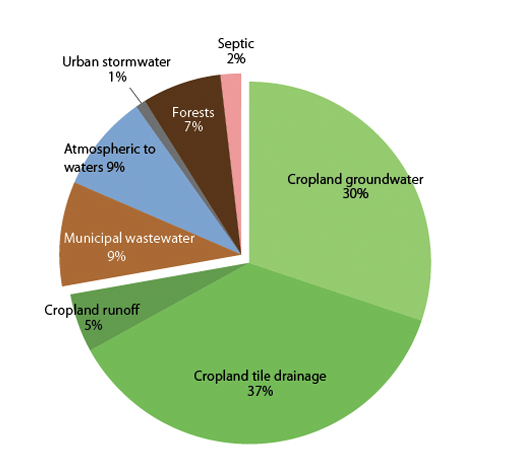 Sources of nitrate pollution in Minnesota

Nitrate pollution varies throughout the state and is generally highest in the Minnesota River basin area where cropland sources account for as much as 95% percent of the nitrate load. These heavily cropped and drained watersheds leech excess nitrate fertilizers into underlying tile drains and groundwater, with devastating results.

Nitrate leaching into groundwater below cropped fields and moving underground until it reaches streams contributes an estimated 30% of nitrate to surface waters.

Overall, the report reveals that addressing the increasing levels of nitrate pollution will require new strategies. Traditional voluntary conservation programs (subsidized by the general public) have yielded limited results, even after decades of implementation.

If we are to achieve our states clean water goals and do our part to achieve the 45% reduction in nitrogen pollution necessary to address the Gulf dead zone, Minnesota will have to adopt more reliable approaches to reducing nitrate pollution. As the report itself acknowledges, Statewide reductions over 30 percent are not realistic with current practices.

The MPCA is also working with the U.S. Environmental Protection Agency and other states to evaluate the effect nitrate has on aquatic life in order to develop and adopt toxicity standards. This standard will be an essential tool in holding nitrate polluters accountable for clean, healthy waters in Minnesota, and is due for completion by January 2015.

In addition, a state-level nutrient reduction strategy is being developed to address Minnesotas contribution to the Gulf of Mexicos hypoxia issue. Minnesota contributes the sixth highest nitrogen load to the Gulf. The strategy will identify how further progress can be made to reduce nitrate and phosphorus entering both in-state and downstream waters.

The challenge before us is clear: Minnesota must restore our waters and live up to our responsibility to those who live downstream. We look to the Dayton Administration to work with concerned citizens and advocates, farm operators, the University of Minnesota and others to develop new measures that will protect the water we drink and the future of farming in Minnesota.

For more information on this study, visit the MPCAs website.