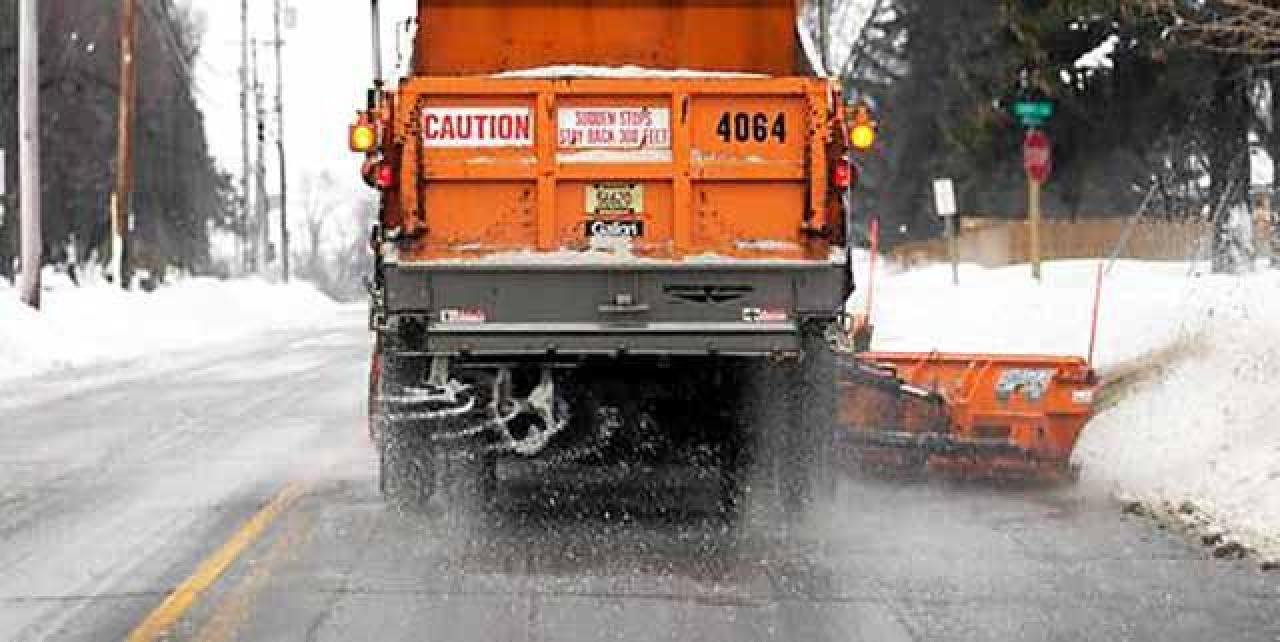 We use salt to manage snow and ice in Minnesota, but too much can irreparably harm our lakes and streams. It's time for Minnesota to go on a low-salt diet. (Photo Minnesota Pollution Control Agency.)

Salt or chloride pollution in Minnesota’s waters has been making headlines for years, as salt levels in our waters have increased with increasing risk to fish, mussels and other aquatic life.

Chloride is a permanent pollutant; it does not degrade over time in our environment. Just 1 teaspoon of salt is enough to permanently pollute 5 gallons of water.

Where's all this salt coming from?

Chloride is the mineral in salt that occurs naturally at low levels in our environment, but at high concentrations, it can be toxic to fish, mussels and other aquatic life.

Winter deicers are the primary source of excess chloride to Minnesota’s waters. Salt is applied to roadways, sidewalks, parking lots and driveways to lower the freezing point of water, helping to prevent ice buildup and improve traction.

About 350,000 tons of deicing chemicals are applied in the Twin Cities metro alone annually, and most (about 78 percent) is retained in local surface and groundwater. Statewide, an estimated 730 million pounds of salt is applied to roadways each year — likely well more than is needed to protect public safety.

Globally, salting is becoming more common. By some estimates, salt use by U.S. road maintenance departments has skyrocketed from 0.16 tons/year in 1940 to nearly 20 million tons per year today.

The other major source in the metro area (24%) is water softeners, which use chloride to soften water. In many communities, that softening salt is eventually carried to wastewater treatment facilities which are not designed to remove the chloride before sending treated water back into the river and other bodies of water.

Impacts on our environment

As we noted in the 2016 State of the River Report, chloride levels in the metro Mississippi River increased by 81% in recent decades. While river levels are still low, many nearby lakes and tributaries aren’t so lucky. Of tested metro area water bodies, around 40 are impaired for excess chloride with another 40 close to exceeding state standards.

And this isn't just a Minnesota problem. A study of 371 lakes in North America found chloride concentrations rising in more than a third of lakes tested.

Local monitoring data also show high chloride concentrations in area groundwater. Twenty-seven percent of the metro area sand and gravel wells exceed federal guidelines for chloride. In Madison, Wisconsin, high chloride levels in groundwater are beginning to make drinking water salty, with concerns that the water may become too salty for most users within 15 to 20 years.

Chloride can also negatively affect infrastructure (bridges, roads, parking ramps, etc.) and vehicles due to corrosion. (To learn more, see The real cost of salt use for winter maintenance in the Twin Cities metropolitan area.

Unfortunately, it's not feasible to remove chloride from our surface waters or groundwater. The only solution is to reduce chloride pollution before it reaches our creeks, lakes and rivers.

This strategy is a winner for the environment and infrastructure, as well as our pocketbooks.

After the trainings, the University of Minnesota reduced salt use by more than 40 percent and sand use by 99 percent. This saved $55,000 in just the first year of smarter salt usage.

The City of Waconia has saved $8,600 a year in reduced salt costs, and reduced salt use on trails and sidewalks through improved salt application. The City of Prior Lake has reduced salt usage by 42 percent since 2005 (even while increasing lane miles by 7 percent) with a minimum savings of $2,000 per snow event, while the City of Richfield has cut salt use in half. These same strategies have helped the Minnesota Department of Transportation save money by using less salt.

In previous years, FMR has worked with a diverse coalition of organizations to push legislation that would help reduce chloride use statewide through training, liability protection for private de-icing applicators, and funding to research and develop more eco-friendly alternatives. We are hopeful that similar efforts will advance in future legislative sessions.

FMR River Guardians have been an important voice in the conversation about salt legislation. If you're not one already, we encourage you to sign up! River Guardians are also invited to special events, including happy hours (now virtual), where we discuss important legislative and metro river corridor issues.

Updates are shared in our water blog and Mississippi Messages.

Tips to use less salt this winter