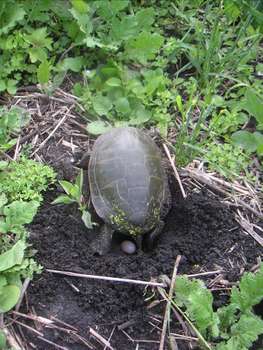 Volunteers at two recent FMR restoration events, one at Crosby Park in St. Paul and one at Lake Rebecca in Hastings, were lucky enough to see female painted turtles laying eggs. So whats the story with these little critters? Well for starters, they are the most widely distributed turtle in North America, in part because they can live in such a variety of freshwater habitats, including rivers, ponds, lakes, marshes and creeks. When not foraging for food in the water or in vegetation along the shore, they can often be found basking in the sun on a rock or log, sometimes sitting on top of several other turtles, vying for that primo sunny spot. Painted turtles arent able to create heat to regulate their own body temperature, so they use the heat of the sun to raise their body temperature high enough to digest food more efficiently.

Painted turtles can breathe air but are also able to absorb oxygen from the water, making it possible for them to sleep underwater, resting safely in the sand or mud at the bottom of the water. The lifespan of a painted turtle in the wild is estimated at up to 40 years, but is generally much shorter for turtles in captivity. Male painted turtles are generally smaller than females and have thicker tails and longer front claws.

Turtles hibernate over the winter and mating typically begins shortly after they emerge in the spring, and lasts from late spring through early summer. As far as courtship rituals in the animal kingdom go, painted turtles are definitely on the cuter end of things: the gentleman turtle swims up to the lady turtle and faces her nose-to-nose. Then, using the backs of his forefeet, he tickles the lady turtles cheeks! She may play hard-to-get and back away a few times, but he will persevere, and eventually she may signal that she is ready to mate by stroking his forelegs with her claws.

Now about those eggs: female turtles will be ready to lay eggs by late May or June and will look for a nest site with soft, sandy soil, lots of sun exposure, and within 200 meters of water. She digs a shallow hole with her hind feet, where she then lays 4-15 eggs. Once she has laid all her eggs she covers the hole and leaves the nest. Assuming they escape detection from any number of hungry predators (raccoons, squirrels, foxes, humans, etc.) and are not in the path of a construction project, the eggs will hatch 72-80 days later  thats mid-to late August for the eggs we saw being laid at Crosby and Lake Rebecca. The hatchlings dig their way out of the nest and are on their own from then on.

Heres another funky painted turtle fact you can use to charm and amaze your friends: they do not have sex chromosomes, and whether or not the wee little turtles turn out to be male or female depends on temperature. Warmer temps, usually above about 84° F result in female turtles, while cooler temperatures result in males.