Please note: This is an archived article from 2007 regarding the building of an entirely new bridge. Since, FMR, community groups and greenway advocates have come together to successfully fund an engineering study that supports re-use of the existing railroad bridge. (See our 2017 letter of support.) Questions or concerns? Please contact FMR River Corridor Program Director Colleen O'Connor Toberman, ctoberman@fmr.org. 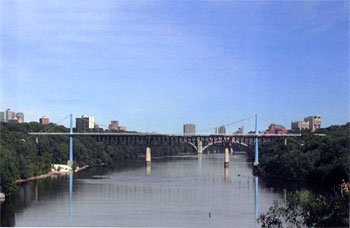 This image shows how the proposed Greenway Bridge over the Mississippi River Gorge would appear from downsteam.

To the surprise of some and consternation of many, a proposed $12 million bicycle-pedestrian bridge over the Mississippi Gorge is under serious consideration.

Word travels fast through river neighborhoods surrounding the Mississippi Gorge in Minneapolis and Saint Paul. A few weeks ago, crews were taking soil borings in the Gorge near East 27th Street in the Longfellow neighborhood, and in a matter of hours, FMR received calls from concerned citizens on both sides of the river.

Upon digging a little bit (no pun intended!), we discovered that Hennepin County was testing the soil for a new $12 million bicycle and pedestrian bridge they planned to build across the Gorge blocks north of the Lake Street Bridge. Many local residents knew the county was planning to extend the Midtown Greenway bike path across the river to connect up with trails planned for Ramsey County, but they assumed the existing railroad bridge would be used.

Some were shocked by the news of a new bridge across the scenic Mississippi Gorge, and felt it came out of nowhere  especially folks in Saint Paul, where neither the city nor the neighborhood organization had been informed. On the Minneapolis side, a Park Board Commissioner learned about the bridge by accident as well  a fact that did not please him since the bridge would have to be built on Minneapolis Park Board-owned land.

The Gorge that travels from Saint Anthony Falls through the heart of the Twin Cities to Fort Snelling is a unique and significant feature; it is the only true gorge on the entire length of the Mississippi River. Part of a national park and home to more than 150 species of birds, the Gorge is a natural wonder in the urban core that has national and international, as well as local, significance. Building a new bridge crossing in this special place is a big deal.

Steve Johnson of the Mississippi National River and Recreation Area (National Park Service) cautioned the County against moving ahead quickly. The project requires federal funds and would be constructed within a federally-designated jurisdiction. That means an Environmental Impact Statement and other review would be required, which could take well over a year to complete.

In a letter to Hennepin County Commissioners, FMR expressed concern about the projects impact on the rivers natural and historic resources. Although we support the idea of a bicycle crossing stated the letter from executive director Whitney Clark, FMR believes that a new crossing in the Mississippi Gorge could have significant and irreversible impacts to one of the most scenic places in the Twin Cities. The letter went on to ask that the county meet with stakeholders on both sides of the river to develop and evaluate a set of alternatives that includes re-using the existing bridge or building nothing.

The Midtown Greenway Coalition, which is made up of 16 neighborhood organizations that line the Greenway from the Chain of Lakes to the River, has been working to help raise funds for the new bridge. But the Coalition members have indicated a sincere willingness to engage with a broader group of stakeholders to ensure the river is not negatively impacted.

Read our project page on this issue to learn more and take action.