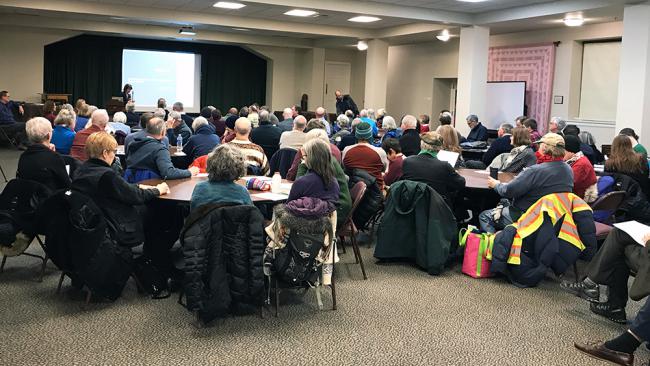 [Note: If you're wondering what's been happening at Ford Area C since February 2020, check out our more recent blog post.]

For over 80 years, Ford Motor Company operated a manufacturing plant in St. Paul near the Mississippi River. Today the main plant site is closed and cleaned up, ready for vibrant urban redevelopment.

But a mess remains. Right across Mississippi River Boulevard from its main plant, Ford dumped hazardous waste and construction debris over the bluff and onto the river floodplain. This place, known as Area C, is a large dumpsite sitting just upstream from Hidden Falls Park and across the river from Minnehaha Falls Park.

We get a lot of inquiries about Area C, so we asked the Minnesota Pollution Control Agency (MPCA) to hold a public meeting to answer community members' questions. On February 20, this meeting was filled with about 150 community members who brought thoughtful questions about the site's history and future.

MPCA staff told us that since they weren't hearing much from the public, they didn't think there was much community concern about Area C. The turnout to this community meeting made it clear that they were wrong. Here are some of the themes I heard in attendees' questions and comments.

Several audience members' questions were about what level of risk the dumpsite poses to the health of people, animals and the river.

The MPCA said that current testing indicates that some hazardous substances, namely VOCs and cobalt, are flowing out of the site and into the groundwater. In most of the site, these substances are detected only intermittently in groundwater.

Monitoring wells on the south end of the site, nearest Hidden Falls Park, show a more consistent presence of these substances. The low levels detected at this time suggest a low risk to the river and human health.

However, FMR and the Capitol Region Watershed District have raised concerns about gaps in Ford's monitoring network. We don't believe it's possible at this time to conclusively state how much hazardous waste remains in the pile, nor how much might be leaking out, without further testing. 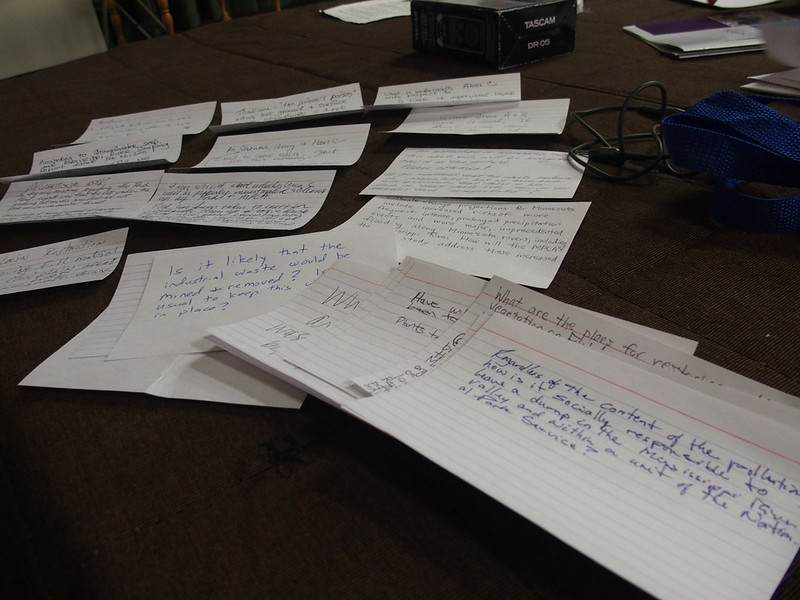 From the dumpsite's toxicity to its impact on bees, community members had plenty of thoughtful questions about Ford Area C, submitted online and via notecards at the event.

About that mythical cleanup...

While most attendees sought to understand risks associated with the pollution pile, one mentioned a friend convinced of the opposite: What, the audience member asked, should they tell a friend who insists the site is basically clean and of no concern?

While the MPCA had been reassuring attendees that the dumpsite doesn’t pose an immediate threat, they made it clear in response that not only has the site not been cleaned up but, in fact, threats are still being assessed.

FMR staff occasionally run into this assumption as well.

Our best guess on the origin of those assumptions is that the riverfront dumpsite gets lumped in with the cleaned-up areas prepped for the big Ford redevelopment atop the bluff. It could also be that reassurances from the MPCA, meant to dampen emergency alarms, can be read too broadly.

As the MPCA noted in their presentation, while their processes are robust, it was concerns from FMR and the local watershed district that prompted the installation of additional testing wells. And it was our relaying of community members’ concerns that led to the evening’s public meeting.

Watch the full MPCA presentation and Q & A

The MPCA presentations slides are also available as a PDF.

What will happen next?

Fortunately, thanks to advocacy by FMR and the Capitol Region Watershed District, the MPCA is requiring Ford to install more monitoring wells at the site in areas where significant groundwater might be flowing.

Ford will also be required to begin testing for PFAS (also known as PFCs) for the first time. PFAS compounds are increasingly understood to pose serious environmental and health threats. PFAS compounds have been nicknamed "forever chemicals" because they don't break down over time as some substances do. We don't know whether the waste dumped at Area C contains PFAS, but we think the public deserves to know for sure.

MPCA staff told meeting attendees that the new wells will be monitored for one to two years to capture year-round data, including from at least two flood cycles. After that, Ford will incorporate that data into a feasibility study.

The feasibility study will explore different options for cleaning up the site, weighing factors such as environmental risk, cost and community acceptance. The public will have a chance to weigh in on a draft of the study, after which the MPCA will select a cleanup alternative and request that Ford implement it.

It is possible that Ford may not be required to completely remove the large waste pile. However, the MPCA anticipates requiring Ford to conduct at least some cleanup at the site. This will include removing some paint sludge and barrels buried near the pile's surface, removing surface debris like rusty metal and concrete, and addressing erosion issues.

If some of the toxic waste is left in place, Ford will be required to continue monitoring the water for the foreseeable future.

Who will be held responsible?

Community members at the meeting asked some thoughtful questions about the future of the site and what will happen if Ford goes out of business someday.

The MPCA advised the audience that it has structures and procedures to follow for a polluter, like Ford, whose actions were not illegal at the time they were carried out. (In the 1940s-1960s there were no laws prohibiting dumping hazardous waste on the Mississippi River floodplain.) Attorneys have also informed FMR that courts have found polluters like Ford liable in similar situations. And in many cases, the state has entered legal agreements with the responsible polluter, detailing their monitoring and cleanup responsibilities in a legally binding fashion.

The MPCA processes are based on a site's current risk to human and ecological health. If the risk appears to be low, the level of site cleanup and monitoring are moderated.

If conditions change, for instance, if the Ford dam is removed someday or we learn about contaminants that we previously didn't understand, the decision-making process can be reopened for another round of study. Further cleanup could then be required as a result.

Ford is and will remain the "responsible party" for the waste at Area C. But what if, as one audience member asked, Ford goes bankrupt someday? It's not hard to imagine a future where our transportation systems have changed so radically in response to climate change that a legacy auto manufacturer can't keep up.

MPCA staff assured the audience that if a responsible party is someday unable to carry out needed cleanup, the state and federal governments step in. Folks sitting around me seemed to immediately grasp what that means: Taxpayers could be responsible for funding future cleanup at this site if it's not done now, and then later determined necessary.

At the end of the night, nearly everyone agreed that they'd like to see the Area C dumpsite removed from the river's floodplain.

What's the right thing to do?

This is what it comes down to: We have a massive pile of hazardous waste and debris sitting on the floodplain in our national park. Audience members did not miss this point; they asked several questions about why and how this dumpsite has been allowed to remain.

I understand why the MPCA has laws and policies providing guardrails around its work. But in this case, those procedures seem to fall short of guaranteeing what some people in the room really wanted: a profitable polluter held fully responsible for its actions.

To me, the most stirring part of the meeting was near the very end. A community member asked the full room, "Can I just have a show of hands? I assume everybody in here wants it all gone." Every hand went up, including those of the MPCA staff in the room. Staff agreed that "it just doesn't feel right" for the pile to remain and that they'd ideally like to see the pile gone, too — but said that the state's legal structures might not force a full pile removal.

That's the issue we face now. It's not just about monitoring wells and measuring levels of hazardous substances leaking into the river.

It's about a community where Ford profited for nearly 90 years and is now leaving a mess behind as it departs. With the community's values and desires clearly stated, how will our state and local government leaders respond?

Will anyone make Ford clean up its mess on the Mississippi River?

Your participation in this work has an impact! Together, we're showing Ford, the MPCA and the city that residents care about a clean future at Area C. Become a River Guardian today to hear about future opportunities to advocate for Area C and other river issues.