A brief history of the Ford Area C dumpsite 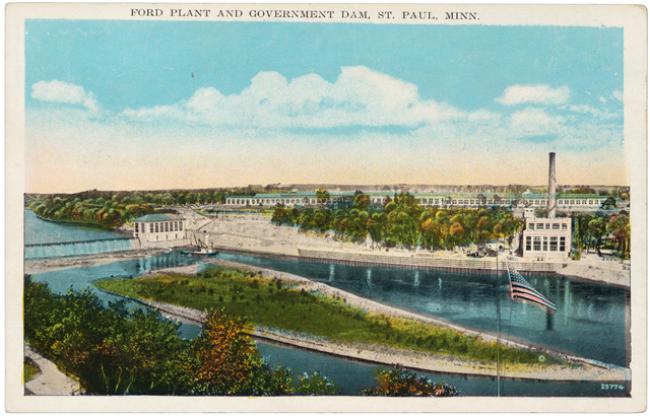 Ford dumped waste over the bluff and along the riverfront to the right of this postcard's edge. (Minnnesota Historical Society, 1930)

We're glad to see such interest. And we encourage everyone who wants to learn more to check out our Ford articles and sign up for our Ford email updates list.

As for its history, while there are many long-form articles that look back at the life of the Ford plant (even a movie), there's not much focused on Area C. In fact, many stories don't even mention it.

So, pulling from public state agency and city sources, we've put together a basic timeline to lend some historical context. 1925 — Ford Motor Company begins operations at the Twin Cities Assembly Plant along the Mississippi River in the Highland Park neighborhood of St. Paul.

1945-1966 — Ford dumps waste solvents over the bluff and deposits barrels of paint waste onto the Mississippi River floodplain, creating what is eventually named "Area C." (The primary manufacturing campus includes parcels "A" and "B.")

1965-66 — Ford deposits large amounts of construction debris on top of the hazardous waste at Area C.

1979 — The U.S. Army Corps of Engineers, with Ford’s permission, adds construction debris to the top of the Area C dump during nearby lock and dam reconstruction, making removal of the hazardous waste underneath more difficult. Ford is paid by the yard for the disposed-of waste. Ford relied on the river for hydropower and sometimes for shipping. (Minnesota Historical Society, 1925)

October 1980 — An anonymous party informs the Minnesota Pollution Control Agency (MPCA) about the hazardous waste disposed of at Area C. MPCA requests that Ford investigate its past waste management practices. Ford reports additional historical waste disposal areas around the main assembly plant area, though much of the waste originally disposed of in these areas had been moved to Area C in the 1960s.

1981 — The City of St. Paul, with Ford’s permission, adds 47,000 cubic yards of construction debris to the top of the Area C dump during nearby road construction despite the knowledge that it will make future removal of the hazardous waste underneath more difficult.

1987-1990 — Ford conducts additional sampling and evaluation at Area C. Evidence of contamination is found, but at levels below the standards of the time.

June 1990 — In response to ongoing concerns about pollution at the Ford plant, MPCA issues Ford a Request for Response Action (RFRA), which requires Ford to study options for pollution remediation or removal at its site and develop a Remedial Investigation/Feasibility Study Work Plan.

January 1991 — MPCA approves Ford’s Remedial Investigation/Feasibility Study Work Plan for the site. Area C is only a minor consideration because the MPCA is satisfied that Ford’s own groundwater testing of the site shows that the amounts of hazardous chemicals leaching into the river from the dump are within the levels considered acceptable.

Area C, where Ford dumped waste and several agencies dumped construction debris, is just downstream of the Ford steam plant; its smokestack is visible from the concrete cap or parking lot in the previous photo. (Photo: Tom Reiter)

March 1991 — Ford requests that it not be required to continue water monitoring at Area C. MPCA grants this request and monitoring ends. Area C is not monitored for the next 20 years.

April 1993 — Ford reports that it has complied with the MPCA order to clean up contamination at the main assembly plant site by treating or removing contaminated soil and installing groundwater monitoring. This does not include any further action at Area C.

June 1993 — MPCA board votes to remove Ford plant from the state’s Permanent List of Priorities (Superfund list), based on its satisfaction that pollution concerns at the main assembly plant site have been addressed. Area C is not raised as a factor in this decision. An unknown number of barrels of waste lie below the long grown-over construction rubble at the Ford Area C dumpsite.

April 2011 — MPCA requests that Ford provide an updated report about the history and status of Area C.

April 2011 — Ford begins additional water monitoring and waste sampling at Area C.This sampling, carried out by Ford’s consultants, shows that toxic substances remain in the waste pile but that any leaching is believed to be within current pollution standards.

April 2014 — Ford submits the Area C report requested by the MPCA in 2011. The report reviews the site’s history and notes that Area C is in disrepair — the pile is slumping, its edges are eroding, old debris and drums are visible, and the fence separating the site from Hidden Falls Park is in such disrepair that the public appears to be regularly crossing into the site. The report recommends implementing erosion controls to reduce exposure risk. The promise of cheap hydropower from the river is often cited as the chief reason that Ford selected the St. Paul manufacturing site. (Photo by Tony Webster/CC)

May 2017 — Ford submits an updated report outlining the history and investigation of Area C.

July 2017 — In comments to the MPCA, the City of St. Paul’s engineering consultants raise concerns about the sufficiency of Ford’s monitoring at Area C. The letter states that there is insufficient data to conclude that the site is not presenting long-term risks to the environment and the public.

July 2017 — In comments to the MPCA, FMR asserts that “we believe risks to human health and the environment have not been properly evaluated and we are concerned that the report improperly understates the seriousness of pollution problems within Area C.” FMR suggests numerous steps to properly investigate the risks and encourages Ford to begin investigating possible cleanup options as well.

April 2018 — Ford submits a new groundwater sampling Work Plan for Area C. The MPCA approves it in May 2018.

July 2018 — FMR and partners request that the MPCA require Ford to expand its groundwater monitoring at Area C in response to recommendations by engineers hired by the Capitol Region Watershed District. These engineers have raised concerns that the existing monitoring network at the site is not sufficiently monitoring how water flows through the site and into the river.

July 2019 — Main plant site is granted MPCA certificate of completion for environmental cleanup. This does not include Area C.

August 2019 — MPCA grants request by FMR and partners to hold a public meeting about Area C.

October 2019 — In response to July 2018 requests by FMR and others, Ford agrees to install additional water monitoring wells at Area C.

Read more from the river land use and development blog