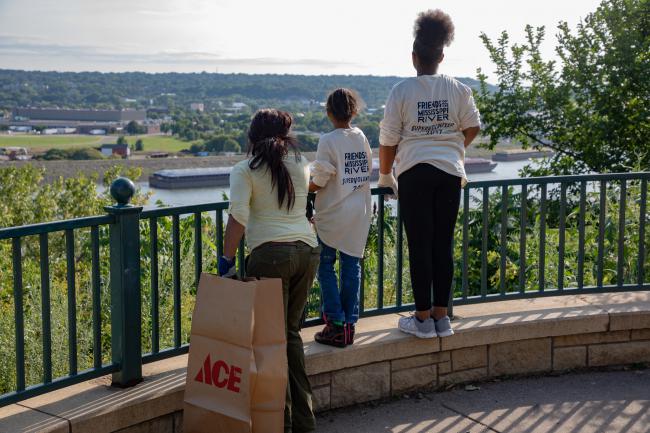 FMR volunteers enjoy the view from Indian Mounds Park, a vista that has stirred hearts for thousands of years. (Tom Reiter for FMR)

Indian Mounds Park, situated at the top of the river bluff on St. Paul's East Side, has been considered a special place for 2,000 years. American Indian communities, including the Dakota, used this site as a burial ground. At least 37 burial mounds were once in this area but only six remain today.

The park currently features a blufftop trail that is eroded and unsafe. While considering options for moving the trail, new studies revealed additional underground evidence of likely burial sites that were not previously documented. There is not enough space near the bluff to build a new, safer trail while also protecting these cemetery areas.

In consultation with tribal communities, the city has proposed removing the existing trail along the bluff and redirecting all visitors to an improved trail next to Mounds Boulevard. Short spur trails will be added where appropriate to provide access to the bluff's edge and scenic views. This proposal has sparked controversy.

FMR supports the new trail plan and submitted a letter of support to the city.

Our letter notes that nothing can restore the devastation that has taken place through European settlers' theft of Dakota land and the destruction of burial mounds and other sacred sites. However, the city can and must respond to the guidance it’s received from tribal communities about the best ways to acknowledge this history and protect the burial sites that remain.

We also state that East Side residents should have better access to parks, trails and the Mississippi River but that those disparities should be addressed within the larger system of parks and trails. There are many other East Side parks in need of investment and improvement. Parks serve several purposes; preservation and recreation are both critical functions.

We asked Maggie Lorenz, Interim Executive Director and Wakan Tipi Center Director for the Lower Phalen Creek Project (and an enrolled member of the Turtle Mountain Band of Chippewa), why it's important to protect Indian Mounds Park. She told us, "Any new trails at this site will further disturb Dakota burial grounds that have already been desecrated. We want to protect what remains and let these ancestors rest in peace... It is long past time that city and state agencies comply with tribal consultations. In this instance, the city is getting it right and we support their work in coordination with the State Historic Preservation Office, Tribal Historic Preservation Offices, and Minnesota Indian Affairs Council."

Become a River Guardian to hear about easy opportunities to advocate when important river issues arise.