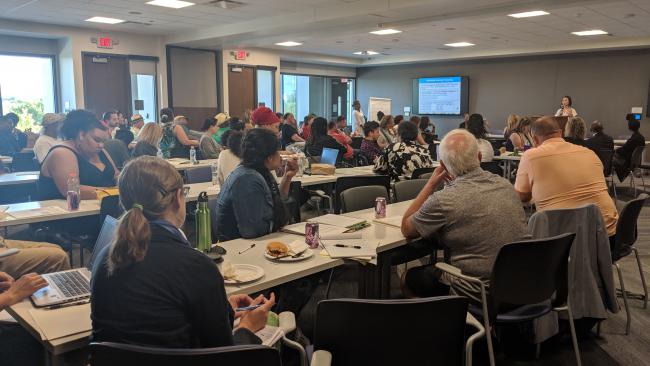 On August 22 I attended the second Upper Harbor Terminal community learning table hosted by the Environmental Justice Coordinating Council and Pillsbury United Communities. This four-hour event was open to anyone interested in learning more about how development processes work and to sharing their ideas about the future of this important city-owned 1-mile riverfront site in North Minneapolis.

The meeting drew a crowd of roughly 70 people.

After not seeing any elected officials at last month's learning table, I was pleased to see a few participating in this one. Councilmember Phillipe Cunningham, Representative Ray Dehn, and Minneapolis Board of Education Director KerryJo Felder were all in attendance.

Affordable housing was the main focus of this event. Last month's learning table also focused on affordable housing, and the feedback from attendees there was that they wanted more time to learn about and reflect on this complex component of the development plan.

Future learning tables will address other aspects of the development plan such as community ownership, green space, and infrastructure.

It's no secret that there's a critical shortage of affordable housing in North Minneapolis, the city, metro area, and across our state and country. Residents are looking to the Upper Harbor Terminal project to help address this crisis. At one point an attendee asked, "How many of you are here because you or someone you care about is affected by the high cost of housing?" Nearly every hand in the room went up.

Alan Arthur, the executive director of Aeon (a the local non-profit affordable housing developer) told the room that he believes that the next two decades will be the worst housing crisis for low-income people since the Great Depression.

According to Alan, the Twin Cities is losing about 100 affordable housing units per week through rising rents and redevelopment while only about 1,300 new affordable units are built across the entire state in a year.

He noted that half of newly-created jobs in the Twin Cities pay wages that place market-rate rents beyond reach. Alan urged elected leaders to require that half of all newly-created housing units have rents or mortgages aligned with these wages.

The Upper Harbor Terminal or UHT concept plan approved by the Minneapolis city council this past spring stated that at least 40% of the new housing units developed at UHT should be affordable to residents earning no more than 60% of the Area Median Income, or AMI.

AMI is a common way to benchmark housing affordability, but it has its limitations. "Area" is based on the Twin Cities metro. Regional numbers overlook differences at the neighborhood level.

North Minneapolis' median household income (about $32,000) is less than half of the metro area's ($66,000). Incomes are even lower for non-white North Minneapolis residents. Housing that meets the regional standard for "affordable" might not still be remotely within consideration for many Northsiders.

Given this reality, attendees pushed for a development plan that far exceeds the affordability standards set in the original concept plan. They asked for a higher percentage of affordable units to be included and at lower income levels.

Attendees and presenters offered several strategies for creating this affordable housing, both rental and ownership, at and around UHT, a site owned by the city. Ultimately, it comes down to funding and political will. Deeply affordable housing is expensive to provide, especially when built from scratch. A good-quality housing unit costs about the same amount to build regardless of the sale or rental price it will earn, so units that will be rented or sold at lower prices need subsidies for development, ongoing operation, or both.

Here's what I can't get past: well before the community was invited to be part of this conversation about what they want and need at the Upper Harbor Terminal site, city leaders were talking with United Properties and First Avenue about their development plan.

The city then awarded development rights to United Properties (owned by one of Minnesota's wealthiest families, the Pohlads) and approved a concept plan centering United Properties' goals. United Properties is a for-profit developer, so now the UHT development is shaped in a way that meets their profit needs. Any subsidies they receive to develop affordable housing will be paid for by us as taxpayers to support United's bottom line.

Non-profit housing developers could have given us a different outcome.

While nonprofit developers still have to charge development fees and assemble public subsidies to support the cost of their buildings, they can often do so at a little lower cost. And their mission is to serve the community, not to serve an already-wealthy business owner. Those differing missions affect every decision a developer makes.

Community ownership offers even more potential than what non-profit developers can provide.

Land ownership is a critical strategy to create affordable living, sustain affordability in the face of market forces, and build residents' wealth. The city owns the UHT site and could have set a path for community ownership of the land. Instead it embarked on its typical route to development and is now poised to turn over 48 acres of prime riverfront land to a wealthy developer. What will it take to make our leaders reconsider?

The night ended with attendees sharing their recommendations about housing at Upper Harbor Terminal. Some of the key themes I heard included:

Despite the robust conversation at the learning table, I still have serious concerns about whether these community engagement events are truly accessible.

The community learning tables run from 4-8 p.m., an enormous time commitment. Many people left early, and many of the people still in the room by the end were those already deeply involved with the project. I wonder how many new voices are being heard in a structure like this.

In addition to the time commitment, many other things that ease access were still left out of the event, such as childcare, transportation, stipends (such as gift cards), and interpreters. Including these are common best practices for community engagement events and I'm not sure why they are being continually left out. Attendees are volunteering several hours of their time for each of these events to provide their expert insight as community members — but this expertise isn't being supported or recognized.

I'm also concerned that I'm not seeing much representation from North Minneapolis' immigrant communities at these events. I'm not aware of any efforts on behalf of the city to carry out targeted outreach to these residents or to provide alternative engagement opportunities that might be relevant to different stakeholders.

The city is only months away from its self-imposed deadline to complete the coordinated project plan, sell UHT land to the development team, and pursue taxpayer funding for First Avenue's concert stadium. The city council promised that this precious time period would be used to give community members democratic ownership over the project plan. As we've said before, we're just not seeing those promises fulfilled yet — and we don't have time to wait any longer.