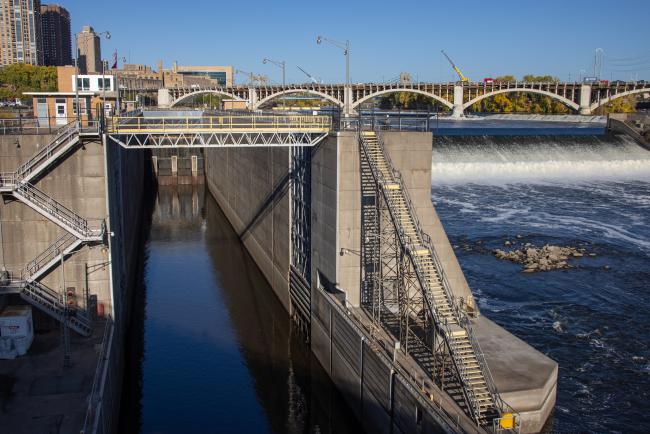 The Upper St. Anthony Falls lock and dam in downtown Minneapolis plays a little-known role in maintaining the Twin Cities' drinking water supply. And its future is up in the air.

Ever since it closed to navigation in 2015, the future of the Upper St. Anthony Falls lock in downtown Minneapolis has been under review. We've shared updates throughout this process, which has culminated in a "disposition study" by the lock's owner and operator: the U.S. Army Corps of Engineers.

In recent weeks, the Army Corps declared its intention to seek a new owner for the lock, a risky plan that could put the future of our river, and the water supply for a million Twin Cities residents, into the hands of a private corporation. (Congress attempted to intervene, but the redirection wasn't explicit enough, allowing the Corps to stay the course on its path to divestment.)

There's a better path. We're advocating for two complementary outcomes, which combined are referred to as "partial disposition":

While the Upper St. Anthony Falls lock was primarily constructed to bring commercial navigation to Minneapolis, the lock's ability to manage river levels is crucial to the Twin Cities in multiple ways. Flood control is an obvious need, but lesser-known is the lock's role in sustaining our drinking water supply.

Minneapolis and St. Paul both draw their drinking water from the Mississippi River via intakes upstream of St. Anthony Falls, relying on the reservoir maintained by the lock and dam at the falls. The treated water supplies not only the two core cities, but 16 suburbs as well.

All in all, nearly a million residents receive at least some of their water from Minneapolis or St. Paul's systems. Major institutions depend on Mississippi River water, too, including the Minneapolis-St. Paul International Airport, the University of Minnesota, hospitals and schools.

Should river levels above St. Anthony Falls drop in a way that cuts off the water supply intakes, the results would be catastrophic and expensive. The system is so dependent on its continual water supply that the reserves would only last a few days.

The risk of this system failure is so potent because of the riverbed's fragile geology. St. Anthony Falls collapsed in 1869 and proved extremely difficult to repair. The Army Corps ultimately constructed a cutoff wall, or dam, at the site to "save" the falls. This wall must be continually maintained to prevent a future collapse.

If the cutoff wall ever failed, the swirling St. Anthony Falls would resume its long upstream erosion process, changing this part of the river from a placid reservoir to a long, shallow rapids. The water supply would be endangered immediately. Over time, the erosion could also threaten roads, bridges and homes.

The Army Corps' plan to transfer lock ownership to an unidentified new owner would jeopardize this fragile system. What if a new owner doesn't properly maintain the infrastructure holding up St. Anthony Falls? The lock must continue to be owned by the Army Corps to safeguard the public interest and our community's safety.

Establishing the congressional authorizations needed to keep the Army Corps permanently at St. Anthony Falls could take a bit of time. However, that process doesn't need to delay the Army Corps' transfer of unused land, and ownership of or access to some other elements of the lock structure, to the city of Minneapolis.

Since the 1950s, the Upper and Lower St. Anthony Falls locks have been part of Minneapolis' riverfront, making up an imposing barrier to the river. Minneapolis leaders and residents are eager create a community gathering place and restore public access to the river on "excess" Army Corps land that is no longer essential for lock operations. The idea has widespread community support.

Friends of the Falls and the Native American Community Development Institute are leading a community engagement and design process for the site. But the project depends on the Army Corps granting site access and transferring partial site ownership to the city.

We hope that the Army Corps will act quickly to make this land transfer happen. Delays could endanger some of the funding that has been secured for the project.

The Army Corps is accepting public comments on its disposition study through March 18.

It's easy to add your name to this sign-on letter urging the Army Corps to opt for a timely partial disposition of the lock that improves public access while safeguarding our water supply. The full list of signees will be submitted to the Army Corps.