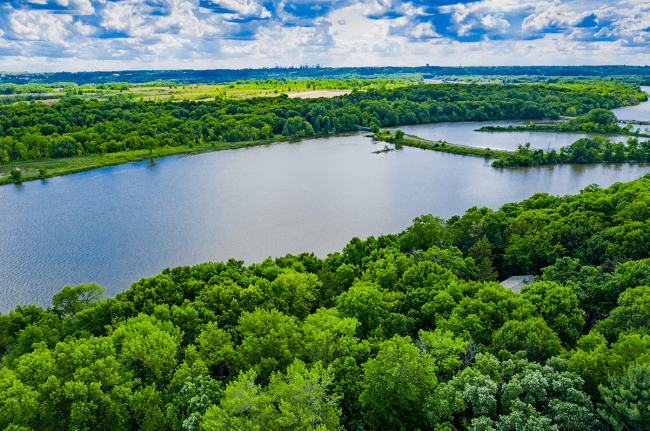 Could the 150-acre Mississippi Dunes golf course still become a riverfront park? Or will a housing development take priority? What options might be available? Join us on September 28 to find out. (Photo copyright Tom Reiter for FMR)

This summer, Cottage Grove residents have been busy advocating for a new city park on the Mississippi River. Mississippi Dunes, a former golf course, presents a once-in-a-lifetime opportunity for Cottage Grove to add a beautiful riverfront park for their community: a city with miles of river shoreline but nearly no public river access.

Despite residents' rallies, letters, and speeches at meetings, Cottage Grove leaders seem to favor a big housing development for the majority of the 150+ acre Mississippi Dunes property. A proposed site master plan includes a 33-acre public park, as well as a small expansion to the neighboring Grey Cloud Dunes Scientific and Natural Area (SNA), among hundreds of proposed new homes.

A 33-acre park isn't particularly large; it's likely to function more as a neighborhood park for future homeowners than as a destination for the entire community to enjoy. The neighboring SNA, while an incredibly valuable site, offers only limited recreation. (The SNA's small trail system is unofficial and unmaintained, there are no park amenities like picnic tables and dogs are not permitted.) 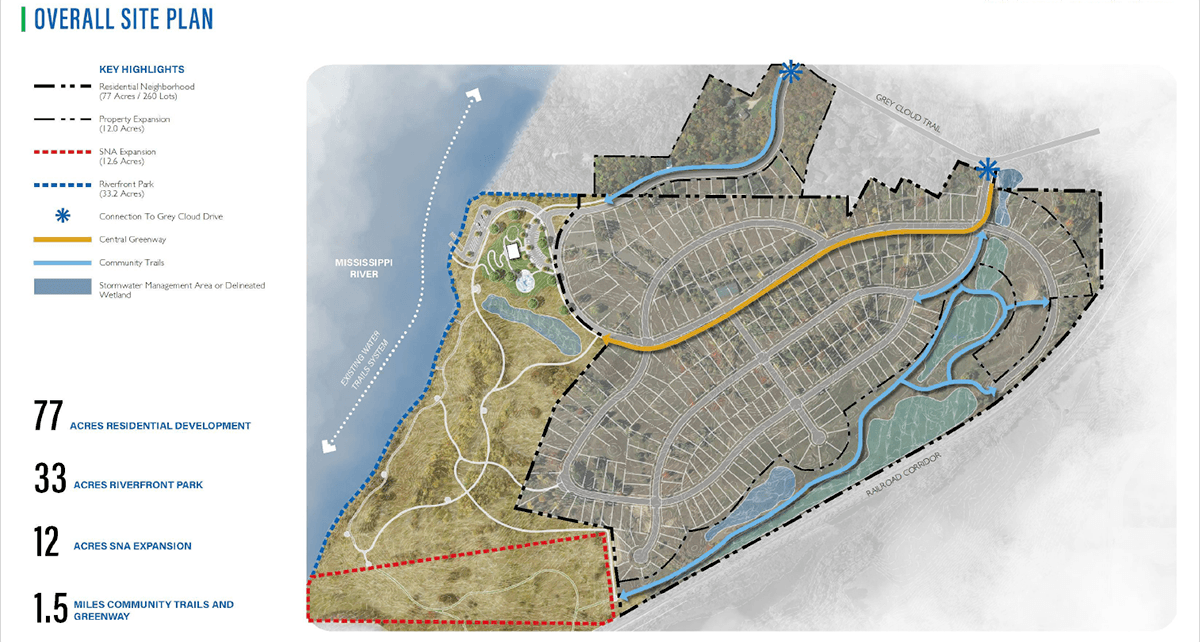 FMR and many residents still hope to see a larger park that provides higher value recreational amenities and protects more habitat, and we're coming together to urge the city to lead the way. (See why in this aerial video of the area.)

What options are available for Mississippi Dunes?

In early September, Cottage Grove residents organized a rally at City Hall to oppose development at Mississippi Dunes. In the Fox9 video covering the story, Cottage Grove Mayor Myron Bailey said the city's hands are tied when it comes to possibilities for the land due to its zoning and the cost of purchasing it.

But we see a way forward.

It's true that the Mississippi Dunes property is privately owned, meaning that the city has to pay for any parkland it wants. A modest amount of parkland must be donated by the owner per city development requirements; anything beyond that has to be purchased at a fair market value.

But FMR has worked with public agencies and private funders to identify funds for such a purchase. We believe it's possible to purchase more than the small amount of land the city is currently seeking. And we're willing to continue to assist that process if the city joins us in actively seeking funding from potential partners.

The city also has significant leverage as it negotiates zoning and environmental review with the developer. The developer will need the property rezoned to allow the number of homes it would like to build. This isn't something the developer has an automatic right to; cities have a well-established legal authority to guide development through zoning and other tools. In master planning processes such as this, cities can use that authority to ensure that private development doesn't overpower other community priorities.

Cottage Grove elected leaders and staff need to be dedicated to securing as large of a public park as possible. If city leaders aren't truly committed to trying to make this happen... it won't.

In May, Cottage Grove residents and FMR staff attended meetings of the city's Park, Recreation and Natural Resources Commission as well as the City Council. At both meetings, we spoke about the importance of this rare opportunity and the need for the city to work hard to preserve it as a park for all residents.

We heard city councilmembers pledge that the Mississippi Dunes planning process would be long and careful, with several opportunities for public input. Councilmembers agreed with us about the significance of this site and this once-in-a-generation opportunity to fulfill the city's documented goals for public riverfront access and parkland.

The city has now shared a draft master plan for the site and outlined a public engagement process. An online survey will be open from September 22 to October 6, supplemented by a community open house on October 7. The city's Parks Commission will vote on the master plan on November 8 and the council will vote on November 17.

But we're concerned that a redevelopment plan may already be considered mostly complete by the city's decision-makers. If the city has informally approved a project plan, it's less likely that leaders will be open to changing it even under community pressure.

Park boundaries, street grids and home lots are already laid out in the draft master plan. It's more likely that community input will only be allowed to shape small aspects. For instance, community feedback might be able to influence things such as park amenities and trail layouts, but not the size, shape or location of the park.

If you're interested in learning more about how to get involved in the future of this special place, join FMR and your Cottage Grove neighbors for a community meeting on September 28.